Global estimates show that 61 per cent of all workers worldwide are informally employed – a total of 2 billion workers. They also indicate that the rate of informal employment is:

They confirm a significant overlap between working informally and being from a poor household:

In the late 1990s, the WIEGO Network commissioned two reviews of the links between informality, poverty, and gender: one of available literature (Sethuraman 1998); the other of available statistics (Charmes 1998). Both reviews found a similar hierarchy of earnings and segmentation by employment status (see Box 1) and sex. These common findings provided the basis for the WIEGO multi-segmented model depicted in Figure 1 below.

In 2004, WIEGO commissioned data analysts to test this model in five developing countries — Costa Rica, Egypt, El Salvador, Ghana, and South Africa — by analyzing national data in those countries (Chen et al. 2005). Data for casual day laborers and industrial outworkers were not available in these countries. The available data allowed for a comparison of status in employment (measured at the individual level) and income poverty (measured at the household level), making it possible to estimate the percentage of workers in specific employment statuses who were from poor households (what WIEGO calls “poverty risk”).

In all countries, average earnings went down and the risk of being from a poor household went up as workers moved down the employment statuses in the WIEGO model. 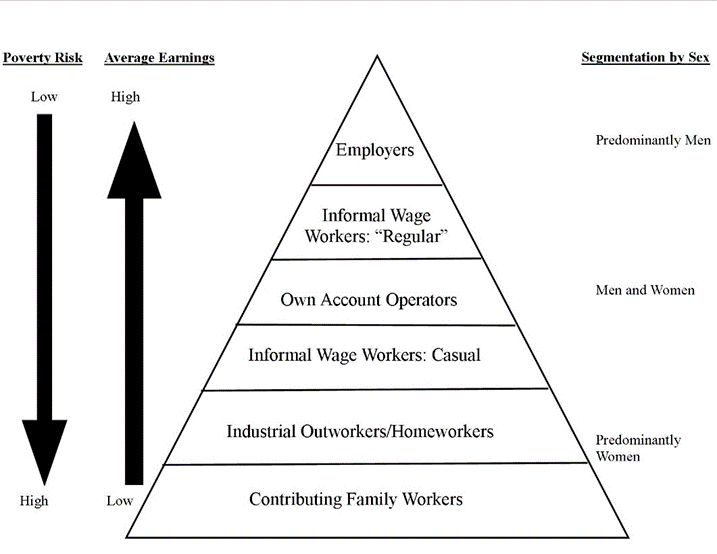 For earlier data on earnings in the informal economy, see Links with Poverty: Earlier Findings.

What follows is a summary of the findings of the analysis of data from five countries for the 2005 UNIFEM publication Progress of the World’s Women and of two recent analyses of data from India and South Africa.

A second comparison is the difference in average earnings within informal employment. As noted earlier, the informal workforce is diverse and segmented. The different segments are associated with different earning potentials that are concealed by the average for the informal economy as a whole.

Within informal employment, in all five countries, women’s average earnings uniformly fell below those of men with identical employment status. The gender gap in earnings was particularly pronounced among own account workers – both agricultural and non-agricultural. This gender gap in earnings was compounded by the gendered segmentation of informal employment, as women were more likely to be own account workers than regular wage workers. Read Chapter 3 of Chen et al., Progress of the World’s Women 2005 for more details.

A recent analysis of the 2015 South African Quarterly Labour Force Surveys found a similar hierarchy of average earnings and poverty risk within the South African informal workforce by status in employment. It was also able to distinguish between women and men within statuses in employment (Rogan 2019). It shows that men are more likely than women to be employers, own account workers, employees inside and outside informal enterprises while women are more likely than men to be contributing family workers and domestic workers. Among employers, employees in informal enterprises and domestic workers, women and men earn roughly the same and have roughly the same poverty risk; while men earn more and have a lower poverty risk than women among own-account workers and employees outside informal enterprises.

Income, and thereby income poverty, is measured at the household, not the individual, level. For the country studies for the 2005 UNIFEM publication, WIEGO used an innovative technique for measuring the risk of poverty among employed persons. According to this technique, the “poverty risk” associated with different employment statuses is defined as the share of all persons employed in a given status who live in households whose incomes place them below the national poverty line. This technique connects the type of employment, measured at the individual level, to the risk of poverty, measured at the household level. As such, it is only feasible in those countries where national data on employment and household income are linked. The hierarchy of poverty risk so defined is the reverse of the hierarchy of earnings detailed above: informal agricultural workers have the highest risk of poverty and, among the non-agricultural informally employed, informal employers have the lowest risk of poverty followed by their employees and other “regular” informal wage workers; own account workers have a higher risk of poverty; while casual wage workers and domestic workers have the highest risk (Chen et al. 2005). Since the UNIFEM-WIEGO country studies were not able to separate out industrial outworkers, it was not possible to measure the poverty risk of industrial outworkers.

Hierarchy of Earnings and Poverty Risk

The statistical evidence from these various sets of national data analysis suggests a hierarchy of earnings and poverty risk across the various segments of the labour force; as depicted in Figure 1.

See Hierarchies of Earnings & Poverty Risk for the poverty risk of households by source of income, formal and informal.

It should also be noted that the poverty and other outcomes of work are a function not only of the level of earnings but also of the period over which earnings are sustained, and the arrangements through which they are achieved, including related costs and benefits. Four dimensions of work are instrumental in determining the income and other outcomes of work: status in employment, place of work, branch of industry and production system. Each status in employment is associated not only with different average earnings but also with different degrees of autonomy and risk for those who work in them. Each place of work is associated with specific risks and, thus, different degrees of security or insecurity. Each branch of industry — agriculture, manufacturing and services — is undergoing structural shifts: the associated uncertainties, costs and risks and benefits will vary by country. Informal self-employed and wage workers tend to lose market knowledge and bargaining power as they move from traditional to industrial to global systems of production. Read Chapter 4 of Progress of the World’s Women 2005.

While informal work may offer positive opportunities and benefits, such as flexibility of work hours and convenience of work location, the costs and risks are often quite high. Some of these are “out-of-pocket” direct expenses needed to run an informal business or otherwise work informally; others are indirect, reflecting the more general conditions under which the working poor live and work. For example, industrial outworkers in global supply chains often have to absorb the risks of global competition (through irregular work orders and delayed payments); and the absorb many of the non-wage costs of production (workspace, equipment, electricity). Some of these costs can be rather high over the long-term, such as when a worker does not have access to health, old-age pensions and education (or training) for herself or himself or for family members. Also, there are psychological and emotional costs — in terms of a worker’s self-esteem and dignity — associated with many forms of informal work.  For a typology of the costs of working informally and examples illustrating the typology, see Chapter 4 of Chen et al. Progress of the World’s Women 2005.

In conclusion, the quantity and quality of employment available to women, men, and households matter a great deal in determining who is poor and who is not – not only in terms of income poverty but also in terms of other dimensions of poverty. The benefits of informal employment are often not sufficient and the costs and risks are often too high for those who work informally to achieve an adequate standard of living over their life course. However, the costs and risks notwithstanding, informal employment contributes to reducing poverty in households. A recent analysis applying an econometric model to national data from South Africa found that informal workers in that country, particularly informal wage workers but also informal self-employed, contribute to reducing the poverty level of their household. The estimates suggest that “eliminating 100 informal self-employment activities, as some government policies have sought to do in order to discourage ‘illegal trading’, would drive as many individuals into extreme poverty as eliminating 63 formal jobs” and that “(i)nformal employees and domestic workers have a ‘per job’ impact on poverty reduction which is even closer to that of a formal job” (Rogan and Cichello forthcoming).