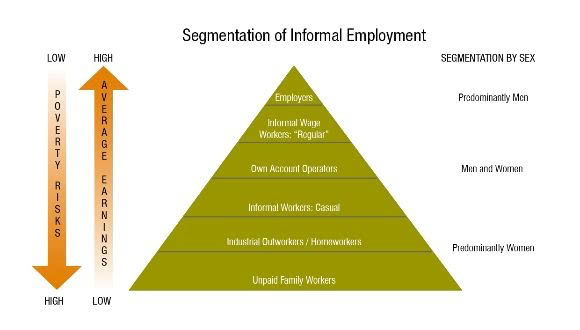 Nearly two decades ago, Marty Chen, the founding international coordinator of WIEGO, sketched a pyramid diagram to describe the structure of the informal economy in a way that captured the diversity of risks. The image, which was based on reviews of the available data by two WIEGO founders, Jacques Charmes and S.V. Sethuraman, demonstrated the strong links between informal employment, poverty, and gender in ways that were not often recognized at the time. The pyramid visual was important, because, for the first time, it showed the diversity of work and earnings within the informal economy — and, importantly, the vast inequality between men and women.

The sketch eventually became WIEGO’s Pyramid of Risk and was published in the 2005 edition of the UNIFEM (United Nations Development Fund for Women) flagship publication, Progress of the World’s Women. Initially populated with data from six countries and demonstrating the hierarchy of risk by gender, it has become one of our foundational contributions to understanding the informal economy.

But a lot has happened since WIEGO’s founding 20 years ago, and we wanted to see how this important concept holds up to a growing body of knowledge, research, data and advocacy. With new data from South Africa, we set out to see how well the informal economy today fits into the pyramid, and, importantly, what that means for addressing working poverty in the Global South in 2018.

The WIEGO Pyramid has become a landmark visual for understanding the informal economy.

One of the points it so powerfully portrays is the stark differences in men and women’s earnings, and the high levels of vulnerability faced by women at the base. The pyramid’s conceptualized structure of the informal economy suggests that status in employment and sex are two of the characteristics associated with working poverty.

Given the progress in data collection and statistical definitions over the past 20 years, it is now possible to test some of the assumptions of the WIEGO pyramid with real-world data.

What this means is that at the top of the informal economy pyramid are employers — the group with the highest earnings, and, therefore, the lowest risk of poverty. Notably, men dominate this category. As we move “down” the different rungs of the pyramid, the risk of poverty increases, as does the percentage of workers who are women.

The extremely vulnerable position of women — who make up the majority of the lowest income earners in a workforce of notably low earnings — has fueled WIEGO’s gender agenda.

Waste picker Alice Lebitza removes valuable recyclables from the waste at the Boitshepi landfill in South Africa. This not only reduces the volume of buried waste in the landfill, it also provides Alice with an income. She is one of 27 members in the Majakathatha Cooperative who pool their collected recyclables and have set up a nearby sorting station where they segregate the materials by type. Photo: Jonathan Torgovnik/Getty Images Reportage

A dearth of numbers

One of the challenges with conceptualizing the original WIEGO Pyramid was that, at the time, only a handful of developing countries had available reliable data on informal employment. Also, the statistical definitions that are now used to measure and compare estimates of the informal economy were in their infancy. Staff members relied on their years of field work to build the pyramid’s landmark ideas.

Over the last 20 years, as WIEGO has grown, so, too, has the data. Our Statistics Programme has worked on national and international levels to build a more accurate picture of the informal economy and increase the recognition and visibility of this important workforce.

Important progress on the statistical front

Fast forwarding to 2018, the ILO’s report Women and Men in the Informal Economy: A Statistical Picture is now in its third edition and contains detailed and comparable statistics on the informal economy for more than 100 countries. It is a hugely valuable resource for researchers and policymakers alike.

Given the progress in data collection and statistical definitions over the past 20 years, it is now possible to test some of the assumptions of the WIEGO pyramid with real-world data.

Not only are women concentrated in the lowest paid types of employment in the South African informal economy, but they also earn less than men within the same broad categories of employment.

Does the pyramid diagram accurately reflect the structure of the informal economy in developing and emerging economies? Are the differences in the risk of working poverty as large as suggested by WIEGO researchers roughly 20 years ago?

Armed with new national data in hand, we set out to test our theories on the South African informal economy.

We started by looking at how average monthly earnings (measured in 2015 in ZAR) differ within the informal economy. What emerged was an inverted pyramid shape that demonstrates a very clear and distinct segmentation among informal workers. Ranked by earnings, workers in private households earn the least in South Africa — for both women and men.

We then looked at the connection between status in employment, poverty and sex. At the bottom of the pyramid, where earnings are lowest, most informal workers in private households and unpaid family workers are women. Moving up the levels towards the highest earnings at the top, each type of employment shows a much greater percentage of men (relative to women) with the exception of own-account workers (where 54 per cent of workers are men). Men dominate (87 per cent) the highest-earning employers’ group at the top.

On each level of the earnings pyramid, women earn less than men in the informal economy. This is particularly the case among own-account workers where men earn, on average, almost twice as much as women (and the gender gap in earnings narrows only slightly when adjusted for hours worked).

The result is an inverted pyramid shape on the left side of the graph, where work with high poverty risks is associated with a much lower percentage of men. In contrast, the right side of the graph depicts a pyramid shape, because low-income work is characterized by a much greater percentage of women. About 79 per cent of workers in private households are women while only 13 per cent of employers (relatively low poverty risk) are women.

On each level of the earnings pyramid, women earn less than men in the informal economy.

The only level of the pyramid which stands out is own-account workers, which has a relatively even distribution of women and men despite being at the higher end of the earnings continuum.

Read stories of women working in the informal economy.

More proof: Risk of poverty is higher for women

South Africa’s data shows clear links among employment, sex and earnings; the next step was to plot in the poverty-risk factor that the original WIEGO pyramid so vividly portrayed.

In the diagram below, each employment category is ranked (from lowest to highest) by the percentage of workers that fall below the median monthly earnings of formal, private sector, non-agricultural employees. Employers, as expected, have the lowest risk of “poverty wages” while, at the base of the pyramid, nearly all (97 per cent of both women and men) household and domestic workers report earnings below the median.

Perhaps one surprise from the South African data is that there are only very small (and statistically insignificant) differences in the risk of earning poverty wages between informal employees inside and outside of the informal sector. However, it remains the case that, in each type of employment depicted in the pyramid, the risk of poverty wages are higher for women than for men.

Thus, not only are women concentrated in the lowest paid types of employment in the South African informal economy, but they also earn less than men within the same broad categories of employment. Part of this may be related to the different types of informal activities that women and men do. Among both informal employees and own-account workers, women are more concentrated in informal trade while men are more likely to work in transport and construction.

Women do back-breaking work as a head loaders in Ahmedabad's teeming main vegetable market. They carry heavy loads of vegetables from trucks arriving from rural areas to local vendors. As members of the Self Employed Women's Association (SEWA), a trade union for poor, self-employed women in the informal sector, they have to work quickly because they are paid by the weight of each load. Photo: Paula Bronstein/Getty Images Reportage

A powerful visual for expanding understanding and advocacy

More than 20 years later, the analysis of South African data suggests that WIEGO’s original view of the informal economy — one where risk relates to sex and status in employment — is an accurate depiction.

Why does it matter that there are different risks at the top and bottom of the pyramid? First, it is important to recognize that the informal economy is not a single “undifferentiated” group of workers. A number of theorists continue to see the informal economy as binary and in singular contrast to the formal economy. We argue that such a view obscures the reality of the diversity of informal economy, and recent data now supports this claim.

Second, but related, the links between poverty and employment are likely to differ, among other categories, by sex, class, caste and race. Understanding these (and other) sources of vulnerability is crucial to designing policies which address poverty reduction, gender equality and income inequality.

It is important to recognize that the informal economy is not a single “undifferentiated” group of workers.

For example, a policy which aims to help informal “entrepreneurs” to expand would almost certainly have a large gender bias, since almost 90 per cent of informal employers in South Africa are men. Moreover, it is also likely that workers at the bottom of the pyramid will face a number of different risks from those at the top. As such, the policy solutions may vary for workers in different segments of the pyramid.

More broadly, it is our hope that this pyramid-based analysis of earnings and risk be used for comparative purposes across a range of different countries. Now that data on the informal economy are available in a number of different countries and a common operational definition of informal employment is widely used, the analysis could be used to investigate a global pyramid of risk and vulnerability.

Understanding these (and other) sources of vulnerability is crucial to designing policies which address poverty reduction, gender equality and income inequality.

Such an approach might be particularly valuable in contexts with more diverse categories of informal workers, such as industrial outworkers (e.g. India), or in countries (e.g. Brazil) where informal waste pickers have formed cooperatives.

Going forward, a visual aid to understanding the levels of risk and vulnerability and how these differ between women and men and by status in employment has the potential to both further our understanding of the structure of the informal economy and to serve as a powerful tool for advocacy and policymaking.

Read more about the informal economy in our WIEGO Publication Series.