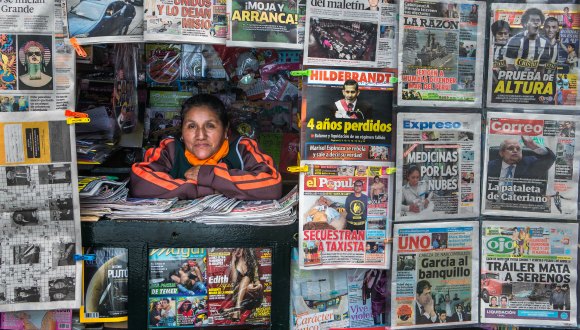 Proactive response from government to restrict movement early. A full-country lockdown was declared on March 16 with less than 150 cases registered at the time. The lockdown is until the 13th of April although this deadline may be extended. During this time, only those classified as essential workers can work outside the home. All others are on mandatory stay at home orders, with exceptions for leaving the home to buy medicine or groceries.

Early on in the crisis the government announced that a one-time cash grant of USD 110 (380 soles) would be made available to vulnerable families to allow them to comply with the quarantine. However, at first, the parameters for the grant would have only covered those living below the poverty line as per records from the Ministry of Finance. Unfortunately, this would have only applied to those families living in extreme poverty, which mostly covers groups living outside of Lima, in rural areas. Some estimates stated that up to 7 million informal workers would have been left out by this proposal.

On the 26th of March, the government announced that this grant would be extended to cover self-employed informal workers (which they referred to as “informales independientes”). The Ministry of Labor was tasked with creating the list of beneficiaries; they did not announce how they would go about drawing up the list.

WIEGO's Focal City Lima wrote a letter to the Ministry of Finance, and released it publicly, which detailed step by step how informal workers could be identified, using a mix of existing municipal registries and a new voluntary registration system. Unfortunately, the ministry was mandated to use data from the “Padron General de Hogares” (a household socio-economic survey) to draw up the beneficiary list. The FC team and the MBOs are hopeful that this list will cover a broad section of informal workers.

WIEGO is in close communications and has learned:

In April, Lima's informal workers  launched a campaign to highlight how the COVID-19 crisis is affecting them, share information about our needs and make sure authorities hear their requests. They stress they want to be part of the solution in defeating the virus and want to follow the measures recommended by the government—but they need income and social protections to survive. Also, they want to raise the profile and end stigmatization of our sectors.

Employment insecurity prior to the COVID-19 crisis has made Lima’s informal workers more vulnerable. Some are out of work and have lost income; others are putting their health at risk to continue to provide critical services. In either case, the workers are concerned with surviving now and concerned about their future.

Through public messaging and media sharing, they are highlighting the affects—economic and health—that the pandemic is having, tell their stories, and share their demands and proposals to improve the situation—including offering recommendations for the recovery of rights and promotion of association / unionization.

Find the campaign on social media:

They have set up the following campaign channels with the partners:

Since 2010, WIEGO has implemented several initiatives in Lima, Peru, creating a critical mass of work on informal employment issues. In Lima, WIEGO works with seven sectors of informal workers: street vendors, market vendors, waste pickers, domestic workers, newspaper vendors, market porters and shoe-shiners. Despite the size of the informal economy in this large capital city, informal workers’ issues have not been widely discussed or understood, and informal work has not been reflected in statistics.

WIEGO is working to raise the visibility of informal workers and their representative organizations, and to equip them with research, statistics and findings needed to speak to the press and negotiate with governments.

Since starting work in Lima, WIEGO has engaged in advocacy efforts, together with membership-based organizations (MBOs) of informal workers, for more equitable policies, social benefits and sustained processes for dialogue with city authorities, among other things. Specifically, WIEGO activities in Lima have included:

A new street vending ordinance - When street trader organizations advocated for an ordinance favourable to informal workers in 2014, WIEGO's research served as an important tool. The new ordinance has a pro-poor approach, approves licenses for a period of two years, promotes formalization and growth of the business of the vendor, and seeks to build capacities of vendors while protecting also their health. Underlying the licensing regime is a commitment to encouraging vendors to save money and move toward formalization of their businesses over time, helping them achieve increased economic security. The City Council developed the ordinance through a participatory consultation process with more than 150 street vendors’ federations. At the consultation workshops, the draft ordinance was shared and comments and suggestions were taken to improve the text and its content.

Read more about the ordinance, and other related street vendor activities in Lima.

Safer working conditions for market vendors - Lima was one of the four cities targeted by WIEGO’s Occupational Health and Safety (OHS) project. The project included research with informal workers on work conditions, a national workshop (jointly hosted by WIEGO and the Consortium for Health the Environment and Development) and dialogues and seminars with policy makers.

Legal empowerment - WIEGO worked in partnership with the Instituto Sindical de Cooperación al Desarrollo (ISCOD), to develop legal resources for informal workers. The two teams conducted consultations with domestic workers, market porters, street vendors, and waste pickers to get a sense of their needs and priorities. Subsequently, they developed and implemented training modules and courses to support workers in understanding their legal rights. A compilation of laws for each sector was made available in Spanish on a dedicated website for use by the workers and their representative organizations.

Domestic worker campaign - In 2016, WIEGO facilitated a “mesa” where government officials and national federations of domestic workers came together to collectively develop a pioneer campaign to increase social benefits for domestic workers. The campaign encouraged households in the district of San Borja to register their domestic workers with the tax office, and to start the payments of health and pension benefits that the law grants them. At the close of the campaign, over 5,500 domestic workers were registered in Metropolitan Lima. Although not all registrations may be directly attributable to the campaign, there was no other effort that took place at the same time. The Social Security department will now use the WIEGO campaign materials for continuous dissemination nationwide. There are also plans with the Ministry of Labor to take the campaign to a national scale.

Lima, Peru was chosen as one of ten cities for  WIEGO’s Informal Economy Monitoring Study (IEMS), an action research initiative that aimed to evaluate the realities, constraints and contributions of informal workers.

END_OF_DOCUMENT_TOKEN_TO_BE_REPLACED

Enhancing Urban Informal Workers’ Contribution to Equity: A Call to Action
By
WIEGO
Domestic Workers Worldwide: 5 Key Facts
By
WIEGO
Why an Enforceable Protocol on Social Protection is Essential in Africa
By
Pamhidzai H. Bamu, Laura Alfers
4 Ways Informal Workers Use Cooperatives
By
WIEGO
India’s Street Vendor Protection Act: Good on Paper But Is It Working?
By
Roopa Madhav
Visit the WIEGO Blog