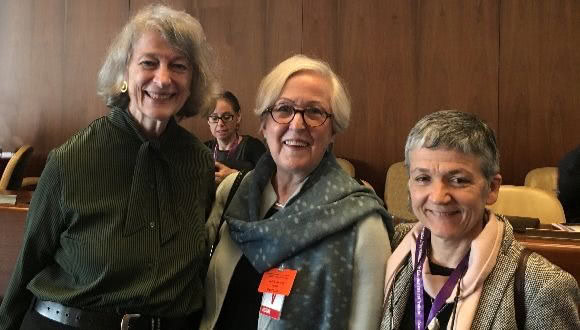 WIEGO is celebrating big changes in the International Classification of Status in Employment (ICSE). And we are proud to have had a hand in helping to establish new categories that, ultimately, could lead to better national policies benefitting informal workers.

From October 10-19, the 20th International Conference of Labour Statisticians (ICLS), which is convened every five years by the International Labour Organization (ILO), met in Geneva. On the table, among other proposed resolutions, were proposed revisions to the ICSE, adopted in 1993. For years, this outdated international standard on employment relationships has not reflected the reality of a transformed global labour force.

WIEGO had a particular interest in revising the classification of homeworkers and other contract workers who are economically dependent. Another area of focus was the classification of sub-categories under the category “Employees” for workers who have less social protection due to their employment arrangement, including domestic workers and short-term hires. Additionally, WIEGO wanted to ensure that place of work was taken into account in the revised standard.

“These statistics topics are of great importance to informal workers,” explains Françoise Carré, WIEGO’s Deputy Director of Statistics who will assume the role of Director on November 1.

“From WIEGO’s inception in 1997, we recognized that the ICSE-93 needed revision.” — Joann Vanek, WIEGO’s Director of Statistics

The long road to victory

“From WIEGO’s inception in 1997, we recognized that the ICSE-93 needed revision,” says Joann Vanek, WIEGO’s Director of Statistics. However, she notes, when the need for revision was brought before the ICLS in 2003, it did not gain the support of many countries.

In the fall of 2008, WIEGO held a conference at Harvard where non-standard employment arrangements in developed countries were considered. The need for these arrangements to be better reflected in the ICSE was recognized. The Canadian expert who attended this meeting took the issue to their delegate to the 18th ICLS, held only a few weeks later. Other countries supported the request that ICSE-93 be considered at the next ICLS. The International Labour Organization (ILO) was asked to undertake work to examine the problems with the ICSE-93, along with other current international standards related to statistics on the structure of the labour force.

The 19th ICLS in 2013 mainly focused on statistics on the economically active population, employment, unemployment and underemployment. It also began consideration of problems with the ICSE-93, in particular with regard to a variety of new contractual arrangements that were leading to uncertain boundaries between self-employment and wage employment. It concluded that “revision of ICSE-93 was an essential and urgent next step and should not go beyond the 20th ICLS.”

To outline WIEGO’s concerns and possible contributions to the revision process, WIEGO prepared, “Considerations for Revision of the ICSE-93” in 2015, later published as WIEGO Statistical Brief No. 17.

A tripartite working group was established and charged with developing a proposal for a revised classification — and invited WIEGO to join it. Joann Vanek and Françoise Carré became part of this working group, making WIEGO the only NGO represented on it. They participated in all group meetings, helping to draft and review the proposal for ICSE-18.

In participating in drafting a revision, WIEGO had five priorities:

3) a classification approach to domestic workers

4) the identification of sub-categories for employees

All of these objectives were achieved when the ICLS approved the new ICSE-18 on 19 October 2018.

It was the result of many years of examination, discussion and advocacy undertaken by WIEGO and so many others. In addition, Françoise Carré notes it was the tremendous support from governments, particularly from developing countries, that made the revision a reality.

Read the draft Resolution concerning statistics on work relationships that was approved.

Shining a spotlight on informality

“The future of work in the world is informal,” Marty Chen, WIEGO’s International Coordinator Emeritus, told participants at the ICLS. “The ability to collect data on informality is crucial for better policy.”

She was one of five speakers on a high-level panel on the Future of Work at the ICLS on 18 October 2018. As she explained: “Existing informal self-employment will persist. Once-formal jobs will continue to be informalized. Workers displaced by automation will turn to self-employment in the informal economy. New forms of informal and dependent contractors will increase.”

Her much-tweeted talk garnered praise and appreciation — especially from government delegates of developing countries — for drawing attention to informal employment.

Other big gains at ICLS

The 20th ICLS also approved additional work on informal employment and on cooperatives, including non-registered cooperatives. Furthermore, it adopted indicators to measure decent work (in the framework of the UN’s Sustainable Development Goals) — another significant win for labour rights, including for informal workers — of which there are two billion worldwide.