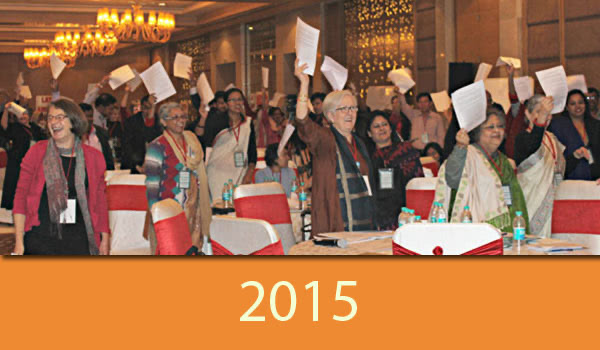 "We, the members of 60 networks, associations and trade unions of home-based workers, together with non-governmental organizations (NGOs) and researchers from 24 countries, met in New Delhi on the 8th and 9th of February 2015 at the Global Conference of Home-based Workers, jointly organized by HomeNet South Asia (HNSA) and Women in Informal Employment: Globalizing and Organizing (WIEGO)."

About the HomeNets and WIEGO

HomeNet South Asia is a network of home-based worker organizations. It was established after the Kathmandu Declaration was adopted at an international conference in Nepal in 2000. The conference was supported by UNIFEM and SEWA. WIEGO provided the technical and research foundation on which the Kathmandu Declaration was based and since then has provided continued support to the movement of home-based workers across the world. HomeNet South East Asia has been active for more than 15 years. In 2013, HomeNet Eastern Europe was formally established.

The HomeNets have been particularly active in promoting the visibility of home-based workers – mainly women – within Asia and within global forums. It is hoped that these efforts to form broader global ties will encourage home-based workers to organize and develop networks in other regions of the world so their voices can be heard and their working lives improved.

The Global Conference is part of Securing Economic Rights for Informal Women Workers, a project sponsored by the Ministry of the Netherlands.

END_OF_DOCUMENT_TOKEN_TO_BE_REPLACED

India’s Street Vendor Protection Act: Good on Paper But Is It Working?
By
Roopa Madhav
Waste Pickers Organize Into a Cooperative: Will Senegal Include Them in its Waste Management Plan?
By
Maguette Diop
The Pandemic is Not Over
By
Christy Braham
World Bank’s Push for Individual Savings Provides Little Protection for Crisis-hit Workers
By
Florian Juergens-Grant
Worker-led Social Protection Schemes Provide a Lifeline
By
WIEGO
Visit the WIEGO Blog