Invisible but Vital to Value Chains of Production

Home-based work is a global phenomenon found in countries rich and poor. Home-based workers are those who produce goods or services in or near their homes for local, domestic or global markets. They work across many industries in the new economy (assembling micro-electronics) or the old (sewing garments and weaving carpets).

Many home-based workers produce under sub-contracts for global value chains. To cut costs and maximize profits, firms outsource production to those who work in their own homes. Advances in technology have also facilitated the outsourcing of production (Chen, Sebstad and O’Connell 1999; Raju 2013).

Home-based work represents a significant share of total employment in some countries, especially in Asia, and is a larger share of women’s than men’s employment.

There are many myths about home-based work. Get the facts here and in detail below.

There are two basic categories of home-based workers. The distinction is important in understanding the challenges these workers face:

In both categories, these workers deal with low incomes, irregular and/or cancelled work orders, unreliable supply of raw materials, delayed payment, and rejected goods. Larger economic trends such as fluctuating demand and rising input prices affect both groups, but particularly the self-employed. 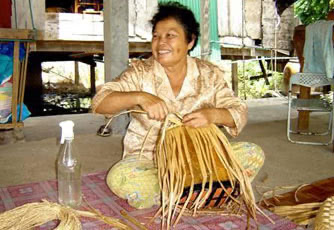 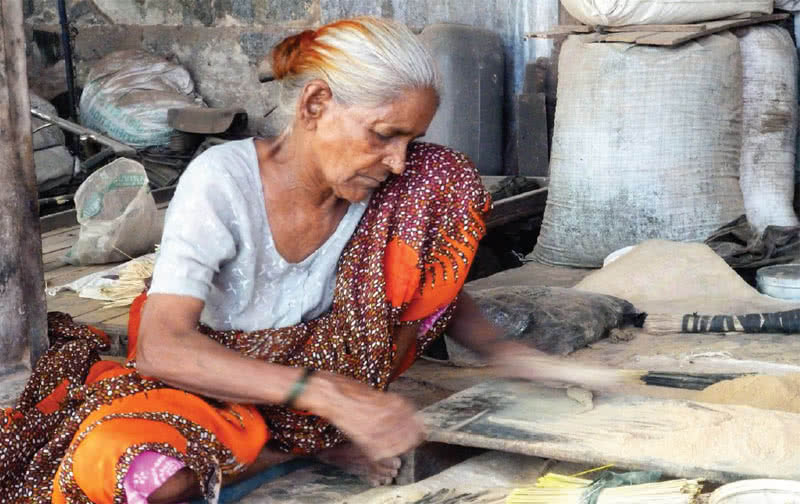 Data on home-based workers have begun to improve in recent years, but challenges to counting this “invisible” workforce remain. For example, some countries do not include questions on place of work in labour force surveys and population censuses; this question is key to determining who is a home-based worker. Enumerators are often not trained to count home-based workers, so list these workers as doing only (unpaid) domestic work.

Also, home-based workers often do not perceive and report themselves as “workers”.

But current estimates show the numbers are quite large.

In Thailand, almost 10 per cent of the workforce – some 3.7 million people – rely on home-based work. The majority of them are women, and over 70% work informally (WIEGO 2019).

In Ghana, there are nearly 1.4 million home-based workers – over one million of whom are women in their prime earning years. Virtually all of them are informal workers, and the vast majority work on their own (WIEGO 2020).

India's National Sample Survey Organisation (NSSO), which has included home-based work as a category since 2005, found 37.4 million home-based workers in India in 2011-12 (according to thewire.in).

The 2018 recommendation of the  20th International Conference of Labour Statisticians on the International Classification of Status in Employment introduced a new category in the classification: dependent contractor. This is an important step in improving data on home-based workers, especially homeworkers. See "Understanding the Statistical Term Dependent Contractor: Frequently Asked Questions" for an explanation of the concept and its importance.

WIEGO compiled existing data on home-based workers and other groups of urban informal workers for Women and Men in the Informal Economy: A Statistical Picture, 2nd Edition, published by ILO and WIEGO in 2013.

Home-based work accounts for a significant share of urban employment in some cities/countries:

Most home-based workers are informally employed:

The vast majority of home-based workers most everywhere are women:

The WIEGO Statistics Programme has developed guidelines for estimating home-based workers and other groups of informal workers. To develop a full statistical picture of home-based workers, information must be gathered on status in employment, type of contracts, and mode of payment (Vanek, Chen and Raveendran 2012).

In developed countries, home-based work is sometimes defined quite differently, referring to those who do not commute to a workplace but rather telecommute from home. For some, telecommuting is a job-related benefit providing flexibility. For others, however, home-based work may be associated with lower quality conditions of employment and possibly a different employment arrangement, for example own account self-employment.

Statistics for the United States (USA) report on the total population of telecommuters and defines a home-based worker as anyone who works even one day a week from home. According to U.S. Census Bureau data, the proportion of workers fitting that definition was 9.5 per cent in 2010. About one half of these home-based workers were self-employed. About one quarter worked in business, management and finance occupations. See Home-based Workers in the United States: 2010. 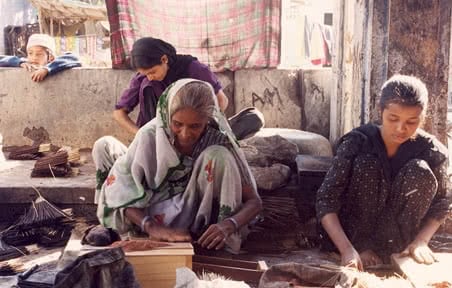 Several factors, including financial need, drive home-based workers to do this work. In the IEMS sample, over three-quarters said their households rely entirely on earnings from informal work. Home-based workers’ earnings play a critical role in meeting basic family needs.

However, home-based workers earn, on average, little – particularly sub-contracted homeworkers, who are paid by the piece and depend on contractors or middlemen for work orders and payments. Homeworkers who produce for global value chains receive a very marginal percentage of final profits. In India, for every 100 rupees paid by a customer, gold thread (zardozi) embroiderers earn 15 rupees, home-made cigarette (bidi) rollers each 17 rupees, and incense stick (agarbati) rollers earn only 2.3 rupees (Mehrotra and Biggeri 2007).

A multi-country study found that home-based work can involve long days – the average varied from 5.2 hours per day to 9.2 hours per day: the longest reported average work day was 15 hours per day (Mehrotra and Biggeri 2007). In the IEMS sample, many reported that they suffered body aches and pains due to their long working hours.

Productivity is negatively affected by the low levels of technology used by home-based workers. Irregular and low pay mean they lack the ability to save. Most lack capital to build their businesses, invest in new machinery or in training.

Basic infrastructure deficiencies such as electricity shortages further hinder productivity, while utility costs eat into available income. In Lahore, 78 per cent of the IEMS sample cited costly, unreliable electricity as a problem.

Home-based workers must travel to markets or to pick up raw materials and drop off finished products. Many must walk long distances, or rely on public transportation or other forms of transport such as rickshaws. The costs of transport reduce earnings. Among the IEMS sample, around one-third of business costs was on transport; among those who spent on transport, one-quarter operated at a loss.

The global economic crisis that began in 2008 made it harder for home-based workers to make a living. In 2009 and 2010, WIEGO and its Inclusive Cities partners conducted studies on how informal workers were affected by the economic crisis. Home-based workers who produced for global value chains experienced a sharp decline in their work orders. The self-employed home-based workers reported increased competition; many reduced their prices to remain competitive. Expansion of retail chains has also created serious competition for local enterprises. See Informal Economy/Links with Economic Crisis.

Multinational firms based in an industrialized country will outsource production to homeworkers scattered across countries. Links between the homeworker and the lead firm can be obscure. This can make it difficult to negotiate rates or receive payment for completed work. This case offers an illustration:

When a trade union organizer in Canada tried to help one immigrant Chinese garment worker get her back wages, she found that the garment worker did not know whom she worked for … the man who dropped off raw materials and picked up finished garments drove an unmarked van. When the garment worker eventually found a tag with a brand label on it among her raw materials, the trade union activist was able to trace the “label” from a retail firm in Canada to a manufacturing firm in Hong Kong to an intermediary in Canada: in this case, the global value chain began and ended in Canada.

When the local intermediary was asked to pay the back wages due to the garment homeworker he replied: “Put me in jail, I cannot pay. The manufacturer in Hong Kong who sub-contracted production to me has not paid me in months.”

For home-based workers whose homes double as their workplaces, inadequate housing is a major challenge. Taking bulk work orders is not possible when there is no storage space. Work is frequently interrupted by the competing needs of other household activities. Many home-based workers meet other household demands during the day and work long hours at night, leading to exhaustion and eye strain.

Some home-based work generates dust or uses hazardous chemicals. However, there is often no separation between the work space and living space. This can endanger both the home-based worker and other family members, including children.

In some cases, home-based workers involved in the IEMS study were relocated with no concern for their livelihood activities.

Home-Based Workers and the Law 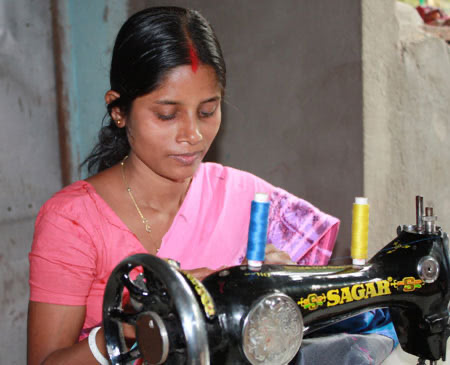 Since the home doubles as the workplace, houses are an economic asset. However, too often dwellings are inadequate – too small with no storage and prone to leaking or flooding. Slum clearance schemes destroy not only homes but also workplaces and livelihoods, undermining their contribution to the local economy. And slum dwellers often pay more for basic infrastructure services per unit than middle class consumers and formal factories.

Attention needs to be paid to current and potential livelihood activities during design and upgrading of low cost housing schemes. Zoning regulations must consider the value of home-based workers by allowing commercial activities in residential areas.

Affordable and reliable basic services – especially water and electricity – are crucial to the livelihood activities of home-based workers.Some positive developments in policies have been achieved in the past two decades.

Around the globe, home-based worker organizations are advocating to have their national governments ratify and implement C177. But more than 20 years later, only 10 countries have ratified it.

2016 marked the 20th anniversary of C177. Home-based workers are organizing. Across the globe celebrated they anniversary and used it to raise awareness about their ongoing struggle for decent work.

Read about the similarities and differences between 1996 and 2016 for homeworkers.

HomeNet Thailand, with support from WIEGO and other partners, campaigned for more than a decade to win legislative protection for homeworkers. Both the Homeworkers Protection Act B.E.2553 and a social protection policy came into force in May 2011. The law mandates fair wages –including equal pay for men and women doing the same job – be paid to workers who complete work at home for an industrial enterprise. Read Winning Legal Rights for Thailand's Homeworkers (WIEGO 2013).

The Kathmandu Declaration addresses the rights of South Asian home-based workers. It was adopted in 2000 by representatives of South Asian Governments, UN agencies, NGOs and Trade Unions from five countries at a regional conference organized by UNIFEM and WIEGO and supported by the International Development Research Centre. WIEGO provided the research findings on which the Kathmandu Declaration was based.

The Self-Employed Women’s Association (SEWA) has helped improve circumstances for home-based workers by representing workers on tripartite boards with government and employer representatives. Over the past four decades, policy advocacy has led to various sectors of home-based workers, including stitchers, bidi (cigarette) rollers and agarbatti (incense stick) workers, being included in the state schedules of the Minimum Wages Act. This has increased incomes. Also, Acts such as the Bidi and Cigar Welfare Fund Act, implemented in the 1980s, provide social security schemes such as health care, child care and housing for home-based workers. 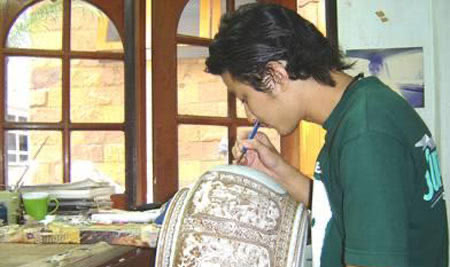 The Self-Employed Women’s Association (SEWA) in India is the world’s largest trade union of women informal workers. It has about 2 million members, about one fifth of whom are home-based workers, and has been instrumental in achieving higher wages and better working conditions for home-based workers in many industries.

HomeNet South-East Asia organizes homeworkers to democratically manage self-sustaining organizations and networks at the national and sub-regional levels that will help them achieve better working conditions and standards of living, steadier employment, and access to social protection.

PATAMABA in the Philippines is a grassroots organization run and managed by women home-based workers. It has a membership of more than 19,000 informal workers (98% women).

Home-based workers in Eastern Europe are increasingly networking their organizations, and have recently formed and registered HomeNet East Europe. The Association of Home-Based Workers in Bulgaria was registered in 2002.