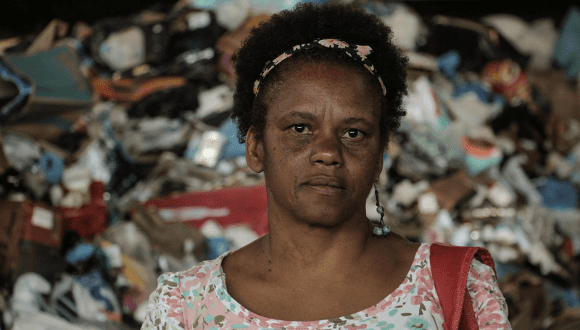 Women across the globe share an uphill battle to break through glass ceilings and social stigmas in achieving equal wealth and status. But among the poor, those battles carry extra burdens.

Women waste pickers, for example, are among the most invisible workers, and the gender discrimination they face on the job and at home receives almost no attention, even by the waste pickers themselves. They are already unfairly relegated to the bottom of the lucrative waste value chain and then often further disenfranchised by their fellow male waste pickers.

WIEGO’s Waste Team in Brazil brought together a group of women waste pickers to discuss their every day experiences and to engage them in a series of games and exercises to examine the role gender plays. The goal was to open up a process of recognizing their value and voice. Gender empowerment doesn’t happen overnight — and these exercises show possibilities for putting theory into action.

Read Women Waste Pickers: Discussing women's empowerment and their changes in their relationship with men.

Striving for women’s empowerment on all levels — economic, symbolic, and political — is crucial for ensuring mutual respect and for improving the lives of female and male waste pickers.

The Gender and Waste Project sought to cast light on the need to bridge individual levels of empowerment with broader and more structural levels. The figure below illustrates the connections between different forms of empowerment that were relevant in all stages of the project.

It is important to also highlight how the process is not unidirectional, but rather an integrated and interconnected one, where different levels of empowerment can continuously impact different forms of empowerment. More particularly, the process reveals that building women’s sense of self-worth must be tied to a clearer understanding of women’s practical needs.

Once practical needs are identified, women can collectively think of ways to begin challenging and confronting obstacles towards economic, political, and symbolic empowerment. Above all, these first steps are just the start of a long-term process that requires steady commitment. 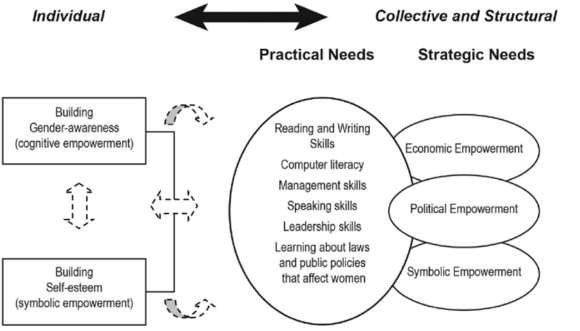 Putting the Empowerment Process into Action

Empowerment is a process, and here are a few steps that the workshops focused on to provide women with more tools to bring about greater gender awareness in their work, with the intent to increase both women’s leadership roles and capacity to represent themselves and their organizations.

#1 Getting comfortable with identity.

The women started off by breaking into pairs and getting to know each other, allowing them to begin to feel comfortable in the group and to slowly open up. Also, and very importantly, they activity helped them to call attention to the way they identify themselves.

How they identify is essential as it shows whether or not the ways of presenting themselves are marked by gender (which would then lead into the next step in the intervention process). Once this short dialogue was finished, each participant had to introduce her partner to the entire group. Read more.

Many of the participants focused in on how autonomy should be exercised both at home and at work. Again, this reflected the initial idea of our method’s design, which links back to the lived experiences of gender as discussed by the women.

The answers varied from having economic autonomy to being free to make one’s own decisions in life. Some of the answers showed how many of these women have, on some level, realized the negative effects of their gendered and racialized roles in different social settings. Read more.

In this step, the group was broken into smaller groups to discuss one of the following topics: autonomy at home, autonomy over one’s body/sexuality, autonomy in the movement or in their association, and economic autonomy. After the discussion, they listed some examples of autonomy on their cut-out leaves that formed part of the “Autonomy Tree.”

This activity built on ideas circulated in the previous activity, and was useful for making sure that everyone’s voice was heard and opinion expressed. It was also important to take time out to discuss autonomy more in-depth, allowing room for challenging more socially ingrained views on gender relations reproduced by society and women waste pickers themselves. Read more.

In the final stage, the women drew the body of a man and a woman and found images or words from magazines that represented the roles attributed to each. The collages highlighted the traditional and stereotypical ways in which gender is represented and internalized in daily life. This activity helped to evaluate the participating women’s level of awareness regarding gender roles.

Furthermore, the activity showed whether participants had started to incorporate a more critical perspective on traditional gender roles after having participated in all the other discussions.

One of the revelations from this activity was that while women waste pickers did not seem to have problems doing activities that are typically designated as “male” in their cooperatives, men did not occupy the spaces typically designated as “feminine”. This was important for further discussions on the role men must take in order to guarantee greater gender equality. In other words, effective transformation needs to involve the cooperation and engagement of men.

Nevertheless, there are several challenges to keep up the momentum of these discussions, one of which is the fact women and men waste pickers face consistent threats to their livelihoods. Read more. 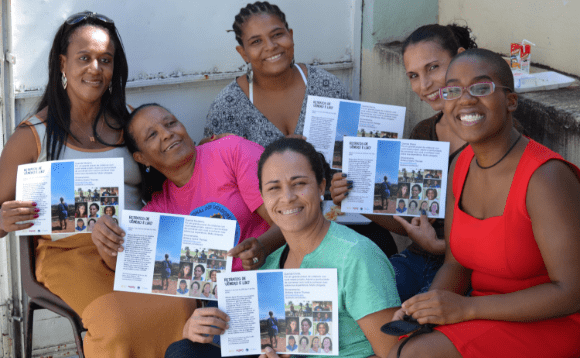 Women participants in a Gender & Waste workshop display materials from the project. Photo: B. Thomas

From Passive Attendance to Co-production of Knowledge

Co-production of resources for the empowerment of women waste pickers was a key feature of the project. For example, women leaders from Brazil’s National Movement of Collectors of Recyclable Materials (MNCR) were designated as co-coordinators. They held an important role in defining several topics for the workshops, in mobilizing waste pickers and even in improving their project management skills during the feedback event with waste pickers from across Brazil and Latin America. Participating women waste pickers, together with the Gender and Waste team, crafted a popular publication (available in English, Spanish, and Portuguese) targeted at waste pickers that includes key lessons learned and discussions around the importance of mainstreaming gender.

Understanding the gender inequalities associated with waste picking can contribute to an increase in the efficiency of waste management, while also encouraging mutual respect between men and women. Furthermore, when working poor women feel empowered — as individual workers and as members of worker organizations — they gain the ability to access the resources they need while also gaining the ability to influence the wider policy, regulatory, and institutional environment.

Download From Theory to Action: Gender and Waste Recycling: A Toolkit for Teachers, Researchers and Practitioners.