Towards a Transformative Agenda for Women’s Economic Empowerment 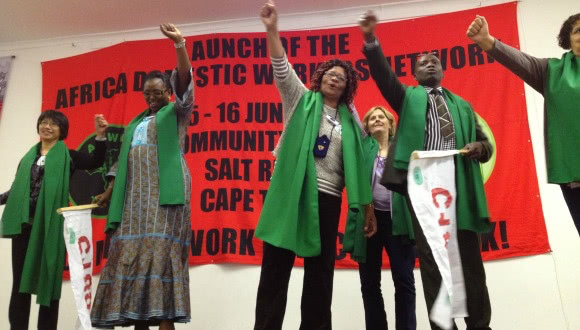 For example, although they make up the broad base of the workforce in many countries, women informal workers have to contend with multiple barriers as workers (such as stigmatization, penalization and even criminalization of their informal livelihood activities and lack of basic infrastructure services at their workplaces) and as women (such as gender norms which restrict their physical mobility and their access to productive resources, a disproportionate burden of unpaid care work, and gender-based violence at the workplace). For some women, these constraints may be compounded with others related to class, ethnic, or racial identity.

While some approaches to WEE adopt a narrow focus on challenging the barriers that women face as a result of their gender identity, more transformative approaches look at the intersecting – and often mutually reinforcing – sources of disadvantage that women often face as women, as workers, and as members of marginalized communities.

Women experiencing the impact of these constraints in their daily lives possess knowledge and insights that are critical to the development of sustainable and appropriate solutions. Although inter-governmental organizations, governments, and others are increasingly opening up participatory spaces for stakeholder dialogue, too often participation has taken the form of consultation rather than co-creation. Unless conditions are created for women, and particularly the most marginalized women, to meaningfully engage in defining the challenges they face and in designing appropriate responses, efforts aimed at improving their economic outcomes will miss the mark.

On International Women’s Day 2017, we reflect on two key principles for women’s economic empowerment, and what the experiences and struggles of women in the informal economy have taught us about how these principles can be put into practice for transformative outcomes.  These principles have been endorsed by the UN Secretary General’s High-Level Panel on Women’s Economic Empowerment of which WIEGO is an active member.

No one left behind: Prioritize women at the base of the economic pyramid

Prioritizing women at the base of pyramid means recognizing the intersecting constraints women face and tailoring responses to meet their specific needs. Put simply: there is no one-size-fits-all solution for WEE. It also requires an acknowledgment that improving economic outcomes in a lasting way requires structural, not just material, change. Historically, many WEE efforts have focused on the latter, producing interventions disconnected from any larger effort to challenge economic and legal systems that are biased against the working poor, and especially women. For example, approaches to empowering working poor women have historically taken the form of “supply-side” interventions, like microfinance, financial literacy, and business development training.

Yet India’s Self-Employed Women’s Association (SEWA), the largest trade union of informal workers in the world, understands that, for many women in the informal economy, access to resources and training are critical elements in a larger, comprehensive approach to economic empowerment. Recognizing the inter-connected nature of its members’ needs, SEWA provides access to services in a range of areas, including digital and financial inclusion, health care, child care, and education and training. SEWA complements its developmental arm with a strategy of struggle, in the form of organizing and political advocacy. As a result, the organization has achieved legal and policy victories at multiple levels, including an ILO Convention on Home Work (C177) and national legislation to support and regulate street vending in India. In this way, members – from street vendors to construction workers to home-based workers – can become better equipped to meet daily needs, and, at the same time, form part of an effort to favourably shape the regulatory environment within which they operate.

There is no doubt that working poor women need access to resources, but as long as informal work continues to be left out of, or stigmatized, in policymaking and planning processes, women at the base of the pyramid will be faced with enormous barriers to economic mobility. To dismantle these, a fundamental shift is needed: policy and regulatory frameworks should be designed for – and with – the base of the pyramid, not just the top.

Nothing for women without women: Centre women’s voices and knowledge

“Nothing for us without us” and “not one law without us” have become rallying cries for membership-based organizations of informal workers, including the International Domestic Worker Federation (IDWF) and StreetNet International. These organizations want systemic change through the participatory processes in which they are positioned as legitimate stakeholders. Like SEWA, IDWF and StreetNet International have made major gains through organizing their members and articulating their experiences and demands in standard-setting processes. As Marcelina attests to in the quote above, the IDWF was instrumental in the adoption of ILO Convention 189 on Domestic Work, a standard that organizations of domestic workers across the world have subsequently used as a tool in advocating for legal change at local and national levels. Representatives of StreetNet International made an impact on the Habitat III process, raising awareness about the need for access to public space and freedom from evictions, among other achievements.

Despite gains like these, informal workers’ organizations and grassroots women’s organizations still struggle to be heard by their local and national governments and in international forums. Many spaces remain closed to them, and those that are open often do not engage them as stakeholders in ways that are meaningful and truly generative. Centring women’s voices and knowledge means creating sustained structures for women and their collective organizations to act as protagonists in driving change. Soliciting their input as an afterthought on issues or initiatives that have already been defined is not enough.

For example, when the Thai government initiated a health policy reform process in 2006, they involved stakeholder groups from the start, and ultimately built a participatory infrastructure that endured even beyond the adoption of the new universal health coverage legislation in 2007. HomeNet Thailand, a membership-based organization of home-based workers, primarily women, participated in the design and the monitoring of the new policy. They successfully pushed for measures to address occupational health and safety (OHS) of informal workers and representation of informal workers on national health committees and boards. Had HomeNet Thailand not been involved in the process, the OHS needs of some of the most marginalized workers would not have been considered.

While these accomplishments can be attributed, in part, to the opening up of spaces for women to be heard, their influence in those spaces begins with organizing. Organizing can serve as a medium not only for collective action, but also for personal transformation. This is especially true for women informal workers who may internalize negative norms about their work as being unproductive or of little value. For them, being part of a membership-based organization can provide a sense of professional identity and solidarity. This individual empowerment can, in turn, translate to a strengthened collective effort. However, to realize the benefits of organizing, workers need enabling environments for the registration of their organizations and legal recognition. For mixed-gender organizations of workers, both formal and informal, support for women leaders is critical to ensuring the equitable representation of worker needs and demands.

Finally, prioritizing the base of the economic pyramid and centring women’s voices is not only a matter of justice, but also a pathway to wider developmental and social progress. Both gender inequality and economic inequality keep societies as a whole from realizing their full potential. Interventions that support the working poor, and especially women, such as the ones described above, have benefited not only women workers but also the larger communities within which they are embedded. Designing solutions for and with women at the base of the economic pyramid makes the broader structure of households, communities, and economies stronger.