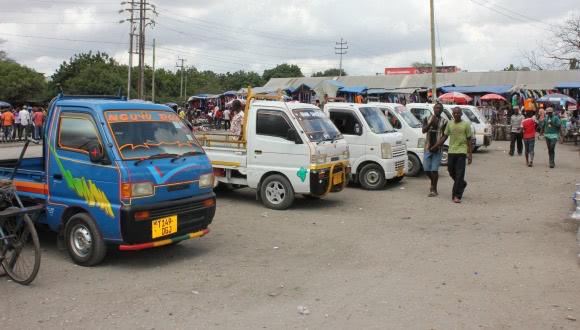 WIEGO’s newly appointed Organizing and Representation Director Jane Barrett recently returned from a trip to Tanzania where she visited the Mchikichini Market in Dar es Salaam. The majority of traders in the market are women who sell locally produced cloth or home-produced clothes. Some stalls, largely on the outskirts of the market, sell imported suitcases and other accessories, as well as second-hand clothes. The stalls in the inner core of the market are built with wood and chipboard and passages and corridors are only partially covered to protect from the elements.

Three years ago, the Mchikichini Market burned to the ground, including the office of the Tanzanian Union of Industrial and Commercial Workers (TUICO). The incident exposed the many hazards lurking in the market – ones the local union branch is trying to address. “There are a lot of risks here, like the chemicals used to make batik [a wax-resistant dyeing technique], but there is nothing to prevent [a fire],” say TUICO branch leaders Abdala Nyangalia, a tailor in the market, and Anthony Chingunje, who showed Jane around the market and brought her inside their organization.

Sixty-five traders in the Mchikichini Market are organized under the Informal Section of the trade union TUICO, which is an affiliate of StreetNet International and the Trade Union Congress of Tanzania (TUCTA). What’s interesting is that TUCTA has nearly 100,000 members – the vast majority of whom are from formal sector entities, including supermarkets, the finance sector, services – including call centers – and in the industrial sector. The informal worker section stands alongside these workers with nearly 2,000 members. The bridging of the informal and formal sector in solidarity for workers’ rights shows the power and possibility of unionizing across divides.

Abdala and Anthony have found a voice for informal workers’ needs at the highest level of the large union. They say they are represented on the national committee and are “treated equally and make the same contribution to ideas and decisions as the representatives from other sectors. The good thing is that our chairperson is also on the regional committee of the union, and is treated with respect.”

Since the fire, occupational health and safety has been on the minds of these worker leaders. Through Jane’s visit, they learned about how the market traders in Warwick Junction, a major market in Durban, South Africa, collaborated with officials, including the fire department, to improve the safety of the market and reduce fire hazards.

(Read more about how these workers improved fire safety in Warwick Junction.)

They are also looking to improve relations with the municipality. After the fire, say Abdala and Anthony, the workers themselves had to rebuild the entire market, despite repeated promises from officials to contribute. During the three-month process, traders continued to conduct business in any space they could find; they couldn’t afford to lose any more income.

In addition to improving market conditions, the union branch provides regular support to its members, including legal advice and assistance settling disputes. “We act as the arbiters,” say Abdala and Anthony. Grievances range from customers walking away without paying full price to disputes with district officials.

Every member pays 1,000 Tanzanian shillings ($0.50 US) a month for membership in cash at the market’s office. This is not the only expense for traders. The workers also pay a daily fee to the municipality of 300 shillings as a kind of rent. This fee is collected in cash every evening by the occupations associations (there’s an association for each different type of vendor) and handed over to municipal officials early the next morning. Associations are different from the union, because the union is not confined to the boundaries of the market like the associations are. In Mchikichini Market, workers pay 200 shillings a day to their occupation association. The leaders, in turn, are paid by the association to do fee-collection.

The regular fees paid to the association and to the union are worth it. “When we have big problems and challenges, the other workers in TUICO support us,” say Abdala and Anthony. “Like if we have a problem with the municipality we take it to the regional committee and then the headquarters of the union. When the municipality hears TUICO is coming, they shiver. The union brings attention!”

The market structures are almost all of wood, so highly prone to fire risk. Photo: Jane Barrett.