Technology at the bottom of the economic pyramid: What’s inhibiting uptake by informal workers? | WIEGO Skip to main content

Technology at the bottom of the economic pyramid: What’s inhibiting uptake by informal workers? 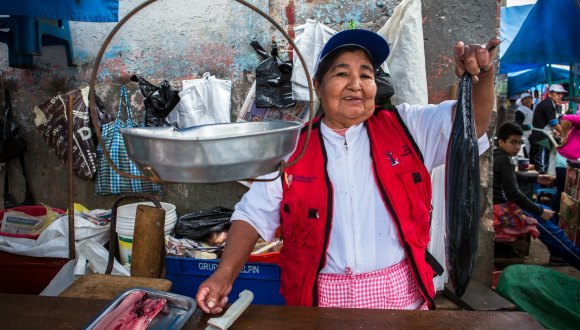 In recent years, there has been an increasing emphasis on the potential for technology to lift millions out of poverty. The Sustainable Development Goals (SDGs) set out global benchmarks to ensure the poor and vulnerable have equal rights to economic resources, including appropriate technology (SDG Target 1.4) and technology upgrading to improve productivity (SDG Target 8.2). In addition, the first report from the UN High Level Panel on Women’s Economic Empowerment recognizes “building digital, financial and property assets” as primary drivers of women’s economic empowerment.

Read about WIEGO’s participation in the UN High Level Panel on Women’s Economic Empowerment and a Q&A with Renana Jhabvala, panel participant and WIEGO Board Chair.

The consensus around the need for improved access to affordable technology belies the uneven uptake of technology among the working poor, despite increasing international emphasis and investment in its potential. To realize the SDGs and similar goals, there is a greater need to understand the specific barriers that have limited technological adoption by informal workers.

In 2015, WIEGO and Practical Action (with support from the Rockefeller Foundation) undertook research in five cities (Ahmedabad, Dhaka, Durban, Lima, and Nairobi) to understand the technologies being used by informal workers and the barriers they face in adopting technology that could improve their livelihoods. For this project, “technology” was conceptualized in line with literature that views it as including tools and equipment, skills/know-how, and ownership and institutional arrangements around technological use.

Read the full report resulting from this study, "Technology at the base of the pyramid: insights from Ahmedabad (India), Durban (South Africa) and Lima (Peru)", here.

In a recent study, informal workers identified some of the most basic tools – knives, scissors, string – as the “technologies” used in their work. Photo: Asiye eTafuleni.

Participatory research with informal workers in a range of occupations, including construction workers, garment workers, home-based incense stick rollers, market traders, market porters, non-motorized transport operators, street vendors, and waste pickers, revealed that some of the most basic technologies – such as a metal basin (used by construction workers to carry cement), a scale (used by street vendors), or a wooden board (used to hand roll incense sticks) – were some of the most important “technologies” identified by workers.  The study also provided insight into several inter-related factors inhibiting uptake of higher order technology at the bottom of the economic pyramid:

1) A punitive policy environment: Though informal employment represents a large share of total urban employment in the study countries – 80 per cent in India, 67 per cent in Peru and 26 per cent in South Africa – a wide range of workers lack legal recognition and protection. Certain types of urban regulations create disincentives for informal workers to make investments in better technology. Street vendors, waste pickers, home-based garment workers, and construction workers, for example, work with a level of vulnerability that impedes technological investment and upgrading. In some cases, municipal bylaws can generate risks meaning that better tools or technology may in fact subject the worker to harassment.

In Durban, South Africa, for example, waste pickers have abandoned the use of certain tools essential to their work, such as knives and blades used to process recycled cardboard or scrap metal, for fear of being arrested or fined under the “Nuisances and Behaviour in Public Space” law adopted by the municipality in June 2015, which lists a wide range of objects that are prohibited in public space. One female cardboard recycler, for example, reported that she now uses a piece of glass instead of a knife to remove the tape from the cardboard boxes she recycles.

Durban waste pickers have scrapped the use knives, essential tools in their work, for fear of being arrested. Photo: Asiye eTafuleni.

2) Lack of secure access to public space: Street vendors and other informal workers often use public space for economic purposes, but in some cities they lack appropriate legal recognition to do so. This means informal workers are at times exposed to confiscation of their goods and equipment, as well as evictions and other forms of harassment. Because of this, they are less likely to upgrade their work tools for fear they will be quickly taken away. A street vendor in Lima noted that mobile tools such as a push cart for selling food was important because, “[…] at the moment the police comes, we have to run.” As one of the project coordinators reflected, “The reality is that for some informal workers, possessing technology is a risky liability, rather than an asset.” On the other hand, Lima’s emolienteros (street vendors who sell traditional Peruvian beverages) are legally recognized and permitted to sell in public spaces. Some emolienteros surveyed had invested in refrigerators or sturdy metal carts, facilitated in part by the fact that they have permanent vending spaces and access to the grid energy system.

A Lima street vendor identified his plastic tarp as his most important piece of “technology.” Photo: Themis Castellanos.

3) Access to workplace infrastructure: Having reliable and affordable access to infrastructure and services, including electricity, water and sanitation and secure storage space, are key pathways to technology adoption. Market traders surveyed in Lima displayed some of the highest levels of investment in technologies. As sellers of fresh and prepared food, traders operate from stalls in built markets with access to reliable electricity, water, secure storage, and a fixed space to sell. These basic services have given traders a stable business climate in which it makes sense to invest in diverse technologies, including digital scales, meat-slicing machines, and refrigerated display cases.

By contrast, where workplace infrastructure does not exist, its absence presents a clear hindrance to technological uptake and adaptation. Many of the non-motorized transport operators who use trolleys or barrows to transport water, food, and goods for traders in Durban’s busy Warwick Junction market lack a secure place to store their work tools, making them vulnerable to theft. One water porter, for example, says the type of modified trolley that he uses to transport water to market traders has been stolen at least 20 times since 2010. Each time, he is forced to assume the cost of buying and modifying a new trolley, which can take a week – all of which eats into his valuable income.

4) Low earnings, high input costs = little capital left to invest: Informal workers often live precarious lives that make any economic investment a major decision – one that is weighed against many competing needs. Their work, for example, often requires that they parse out their low earnings for permit fees, basic services (water, electricity, etc.) at their workplace, and/or transport costs. In the end, there is limited capital to invest in technological upgrading.

The situation was particularly acute for the women producing garments or incense sticks from their homes in Ahmedabad. Between their low earnings and the need to cover the non-wage costs of production (utilities, transport, repairs and maintenance, etc.), many reported that they lack the capital required to invest in newer sewing machines or incense-mixing machines. As a home-based garment worker in Ahmedabad summarized, “Nowadays people are using fully motorized machines because with motorized machines the work is done within ten minutes. Zuki machine [a type of motorized sewing machine] is a new technology. […] But it is expensive and hence only a few people use it. It costs around Rs.15000.” So while informal workers may even be aware of the return on investment when adding or upgrading technology – such as, in this case, a motorized sewing machine – accessing the needed capital is challenging.

Although workers across the study cities face significant challenges in adopting and upgrading technology for their work, their organizations are finding some ways to overcome them. Home-based garment workers in Ahmedabad can access loans from the Self-Employed Women’s Association (SEWA) bank to invest in improved sewing machines, for example. Organizations of market porters in Lima have negotiated with market owners for training and inclusion to operate manual forklifts during a market modernization process. Working with these organizations represents a key pathway to ensuring technology responds to the needs of informal workers and benefits those at the bottom of the economic pyramid.

This article is part of a series on informal workers and technology. You can find the first article in the series here.