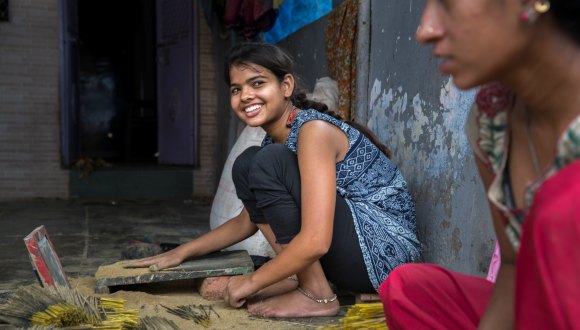 Technology and innovation at the base of the economic pyramid

Nisha is nineteen years old and spends her days hunched over a small board on the ground, rolling incense sticks for a local contractor in Ahmedabad, India. Rolling incense sticks by hand is hard work, and Nisha earns just 10-12 rupees (US$0.15-0.18) for every 1,000 sticks that she rolls. She and other women complete several thousand sticks per day in order to make ends meet.

Better technology – in this case, an incense stick rolling machine that could replace the simple board that Nisha and others use – could have a profound impact on their productivity. Indeed, technology is widely considered to hold great potential for making work safer, cleaner, and more efficient, especially in the digital age. But from the perspective of the women in Nisha’s neighborhood, machines require electricity, which drives up production costs; machines require maintenance, which isn’t always possible; and machines displace workers, which on balance would hurt them, not help.

In 2015, WIEGO partnered with Practical Action and the Rockefeller Foundation to explore these questions, asking what kind of technological changes informal workers are seeing and what impact those changes are having on their livelihoods. These are critical questions in a global context of rising inequality and de-industrialization amidst the digital revolution.

The project explored a wide variety of livelihoods—incense stick rollers, street vendors, garment makers, market porters, cardboard recyclers, construction workers, and others across five countries—to develop an understanding of how technological innovation is affecting workers who earn their living in the informal economy. It found an important role for improved technology among these workers, but not necessarily in the places we’re most likely to look.

There’s more to technology than cell phones and e-banking

Although digital and financial inclusion have become mainstays in discussions of women’s economic empowerment, the workers in the study sample identified several more immediate challenges that call for more basic technological improvements.

Most strikingly, health and safety risks in the informal workplace are remarkably common among the hundreds of workers who participated in the project. Cardboard recyclers in Durban, South Africa, said that using a barrow instead of carrying recyclables on their heads is ‘less heavy on the body’ and makes a big difference to their productivity and earnings. Before, several were head loaders, but that way of working took a toll; as a result ‘we used the little money that we had to see doctors.’ These workers reported that they don’t have mobile phones and don’t use ICTs at all. ‘You don’t need Facebook to tell you how to pick waste,’ one said. But having a sack or a barrow makes all the difference.

In Lima, market porters at the city’s bustling wholesale market in the district of Santa Anita are responsible for offloading fresh produce from delivery trucks and allocating it to market traders’ stalls. They too have found basic technologies to be critically important to improving health and safety conditions. The onion porters, for example, offload sacks of onions weighing as much as 110 kilos each. They rely on wooden pallets to serve as a step up to the truck, a weightlifting belt to protect their backs, and a cloth and/or piece of mesh tied around their heads to protect their necks from injury and to keep the bag from sliding down their back— all so that they can get from the truck to the wholesaler’s stall with such a heavy load in one trip.

The onion porters do have cell phones, but most have very basic models and don’t use them much in their work. The corn porters at the same market do use their phones, but they say their knowledge of the produce they work with—required in order to sort the corn by different quality categories—and their hands are their most important tools.

The risks and benefits of owning technology

Another challenge of technology at the base of the pyramid is that of ownership. One woman who works in the construction sector in India said, ‘Although there are many technologies in this sector, no technologies are in the hands of women workers.’ Not surprisingly, many of the women workers in India said they knew of better technology but could not afford to purchase it themselves.

Another who rolls incense sticks pointed out why machines are advantageous for contractors, who are typically male: ‘he has to keep just a few machines and a few people. The machine works all the time: no leave, no social functions, no excuses; in short, there is no labour shortage.’ Women who work at the factory where machines are kept can work more efficiently, but they don’t necessarily earn more than those who roll by hand, and they lose the freedom to take breaks or stop working when they need to.

Even for those who could afford to own a machine, it may not be the best option. In the case of garment workers, for example, ‘the machine cannot be repaired by ourselves. If the needle breaks, we have to carry it to the repair center.’ That is no small task in an urban environment where it is risky for a woman to carry a valuable machine through public space, without private transport.

These responses suggest how technology can be embedded in power hierarchies related to gender, caste, occupation and the value chain. In some cases, a group purchase of a machine or improved tools can help overcome the challenges. The urban governance environment can also make a difference; for example, where street food vendors have permits and thus don’t fear that their carts will be confiscated, they can invest in stainless steel surfaces rather than using wooden cutting boards, making their product more hygienic and safe for customers.

To be sure, concerns of a ‘great divide’ forming in the digital age between a skilled and wealthy few and the rest of society were widely evident: most project participants use extremely basic technologies—hammers, sacks, hoes, and woven baskets, for example—and view more sophisticated technologies as only being relevant to other (richer) people. But understanding the social and labour context in which these technologies are used reveals a lot about both the barriers to technological change and the potential for little improvements to go a long way.

This article is part of a series on informal workers and technology. You can find the next article in the series here.