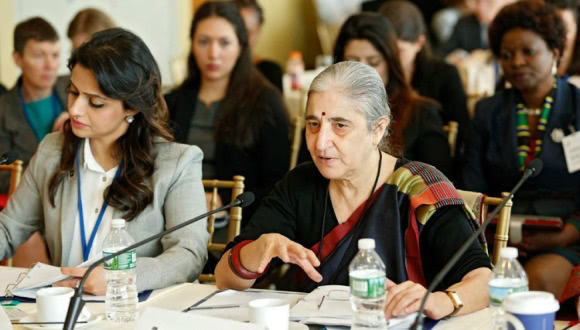 Renana Jhabvala is a world-renowned expert on women in the informal economy. She serves as Chair of the WIEGO Board and has been working with the Self Employed Women’s Association (SEWA) since 1977. Currently, she is SEWA’s National Coordinator, as well as the Chairperson of SEWA Bank and SEWA Bharat. She was recently chosen to serve on UN Secretary-General Ban Ki-moon’s first-ever High-level Panel (UN HLP) for Women’s Economic Empowerment.

On September 22, the UN HLP will launch its first report during the 71st session of the General Assembly of the United Nations. We caught up with Renana in New York to discuss the report’s process and outcomes, as well as WIEGO and SEWA’s roles in advocating for informal workers’ perspectives to be reflected in the document. The report outlines an agenda for promoting women's economic empowerment globally and is the first of two that will be released by the UN HLP for WEE during the course of the panel process, which concludes in 2017. 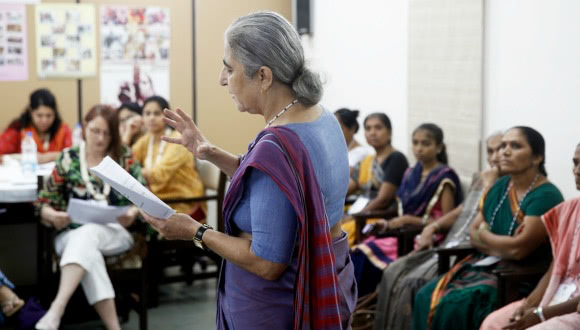 You are Chair of the WIEGO Board and National Coordinator of SEWA. Can you briefly tell us a bit about your work in both of those roles? What are the linkages between them?

RJ: My principal role with WIEGO is to ensure that the linkages with our network of membership-based organizations (MBOs) of informal workers remain quite strong and to identify concerns of the member organizations and of women in the informal economy more generally. That is my role. In fact, when we formed the WIEGO constitution, the chair was always to be from an MBO, so that MBOs could always be at the center of WIEGO’s work. I also work very closely with Marty Chen, WIEGO’s International Coordinator, on setting direction.

One of my roles is bringing people together across different states in India and advocating for issues at the national level. An interesting thing – two things I am interested in, particularly – one is that, in WIEGO, I have always been very interested in the Statistics Programme. In some ways, statistics is one of the very strong points of WIEGO and also is something that most other networks don’t have. And in SEWA, I have always been interested in the union and the unionizing and, two, in finance. So, recently, I have been working hard to start a housing finance company, of which I am the chair now.

You were chosen as a panelist to serve on the UN Secretary-General’s first-ever High-level Panel (UN HLP) for Women’s Economic Empowerment. From your point of view, why is there this need?

RJ: At the international level, gender equality and gender empowerment have always been important issues, but most of the issues have been gender issues and have usually been confined to violence against women, reproductive rights, women in politics and, sometimes, girls’ education. But women as contributors to the economy and the importance of having money in your hands, owning property and being an economic actor have never really been discussed or brought out. This is the first time at the international level that women’s economic empowerment is being discussed in this way.

And what I have been saying about how women’s empowerment has traditionally been discussed at the international level is also a reflection of how women are seen generally, especially in developing countries like India, which is a woman is a mother; she is a sister; she is a sex object, but not an economic actor. SEWA has always focused on women’s identity as worker and so has WIEGO, so for us this is a very important moment.

What does women’s economic empowerment mean to WIEGO and SEWA, and how have you brought this perspective into the UN HLP process?

RJ: Although the informal economy is huge, although it is very important, although there is lots of research done and there are lots of actions, somehow it is all submerged. Our role has been to make it visible and to give it validity. We have done this in two main ways. The first is by emphasizing the informal economy – the numbers, the size, the importance for women and the issues in the informal economy. And, secondly, we’ve brought in the issue of women’s voices – their collective voice, especially. So bringing a strong focus on those themes, I think, has been the main contribution of Marty and myself on the panel.

Recently, you hosted the HLP at SEWA for a consultation, where participants went on field visits to meet and engage with informal workers in their homes and workplaces. What were some of the biggest takeaways from this consultation?

RJ: I think that some themes that came out strongly were about, for example, the importance of inclusive urban spaces for street vendors. Child care came out strongly as a key driver of women’s economic empowerment. Also, the importance of social enterprise was a key takeaway. I think one of the strongest lessons learned for everyone was this idea of a collective model of empowerment. Some of the participants reflected about the fact that traditional approaches focus on empowering women at an individual level, but SEWA is a collective model of empowerment. Related to this, I think the high-level panel has talked a lot about international organizations, governments, civil society and the UN doing things for women, and I think what also came across to all of the participants during the consultation was how women do things for themselves, and together.

The mainstream model is about delivering projects, delivering aid, but you can’t deliver empowerment. It has to be self delivered; it is a personal process, but SEWA shows that it is an individual process that can happen through a collective experience and collective struggle.

The first report of the UN HLP will be launched in September, outlining priority areas and promising actions for advancing women’s economic empowerment. What kind of impact do you hope the report will have?

RJ: I think that the audiences here will be of three types: they will be mostly governments, some UN agencies and some civil society. Hopefully the report can impact all three of these constituencies. The report includes a list of recommendations that we would like each group to do. So if that can move forward, and especially if WIEGO can collaborate with any of the three groups to move recommendations forward, this would be a hope of ours. I also hope that in the launch itself we can make some linkages. I am looking forward to seeing what kind of commitments will be made at the launch, by governments and others.

What are your hopes for the next phase of the UN HLP’s work?

RJ: I am not sure what it looks like, but, ideally, I would like to see commitments from governments and UN agencies, very specifically, on the issues of women in the informal economy and on collective voice. I think the WIEGO slogan of “voice, visibility and validity” can be highlighted much more by the HLP. I hope things can happen in this area. Also, I would like for the HLP to recognize MBOs, and to get governments involved in recognizing MBOs and building inclusive processes with and for them.