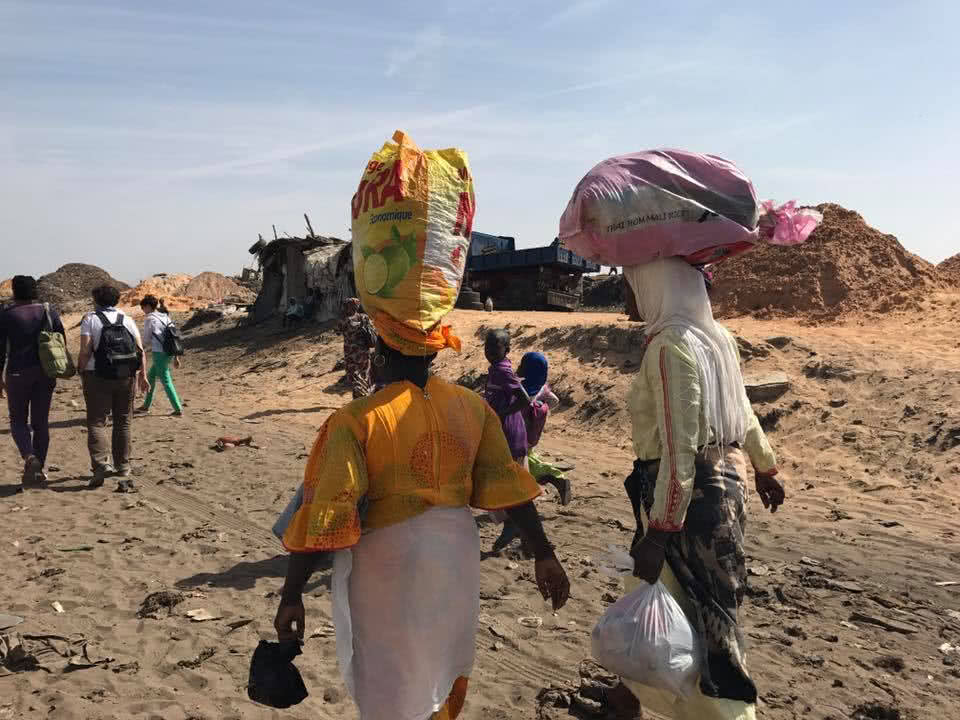 The theme of World Habitat Day 2018 is municipal solid waste management and creating “waste wise cities.” In this article, WIEGO’s Waste Sector Specialist argues that a “wise” approach to waste management must take into account the role played by informal waste pickers and pursue a livelihoods-centred approach to dump upgrading or closure.

By Jenna Harvey with Sonia Dias

As heaping-full garbage trucks pull up to the Mbeubeuss dump, outside Senegal’s capital city of Dakar, an inconspicuous, but highly sophisticated, waste ecosystem gets to work. This system is run by thousands of waste pickers, or récupérateurs, who collect, sort and sell discarded material, diverting it from the overflowing open dump and back into the supply chain for reuse. Within hours, they have efficiently separated out the city’s discards, selling the recyclable materials to eke out a living. Despite how their work greatly reduces the environmental impact of growing urban waste, the city provides no compensation.

But the workers’ livelihoods at Mbeubeuss dump — and at dumps across the world — are under serious threat. In February 2018, the national government of Senegal signed a loan contract with the World Bank to “upgrade” Mbeubeuss, placing in jeopardy the future of the estimated 3,000 individuals who earn a living there.

At Mbeubeuss, as elsewhere, whether or not the upgrading process dispossesses waste pickers of their livelihoods will depend entirely on the approach that is pursued.

Those who have been labouring at Mbeubeuss for decades have their own ideas for how to best move forward, but so far they have not been asked for their ideas to help define specifically what the upgrading project should look like.

Change is needed at open dumps like Mbeubeuss to ensure the safety of waste pickers, the environment, and surrounding communities, but the transition away from open dumps to alternate systems should not displace waste pickers. 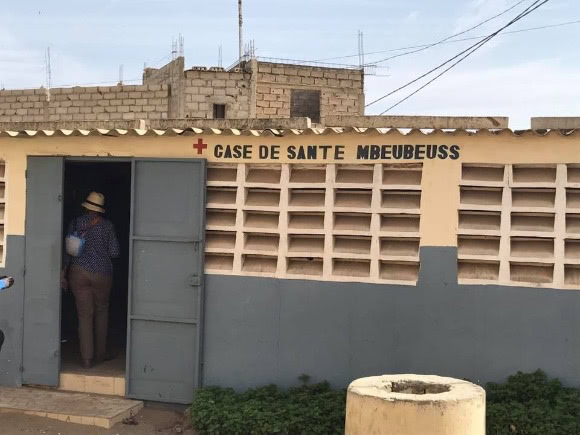 The waste ecosystem at Mbeubeuss dump

Unique systems of economic and social organization have evolved at Mbeubeuss over decades, as increasing numbers of men, women, and children have migrated to the dump from Dakar, rural areas of Senegal, and even other West African countries in search of a source of livelihood.

In the mid-1990’s, waste pickers from Mbeubeuss formed an association, Bokk Diom, to fight the stigmatization of their work.

In the mid-1990’s, waste pickers from Mbeubeuss formed an association, Bokk Diom, to fight the stigmatization of their work and to support the larger waste picker community at the dump. Within a few years, with support from development partners, Bokk Diom was able to obtain land and enough resources to build a health post and a community centre that even has an administrative office and space for classes.

In addition, these workers have developed a deep knowledge and understanding of waste and its worth. Many of Mbeubeuss’ waste pickers specialize in working with specific materials. For example, a small group of women who raise and sell pigs also collect the organic waste from the dump for fodder. Other waste pickers sort out metals and plastics and sell these to enterprises and individual buyers, many of whom are linked to Chinese firms.

These workers have developed a deep knowledge and understanding of waste and its worth.

There is even a waste picker-run recycling enterprise on site. The business employs approximately 70 waste pickers and is owned and run by Mr. Abdul Aziz Seck, a respected elder at Mbeubeuss and a life-long waste picker. This knowledge and waste-business acumen can be harnessed by municipalities and integrated into future systems.

The efforts of Bokk Diom form part of a long legacy of self-determination and resilience at Mbeubeuss. The waste pickers there have weathered economic shocks, natural disasters, and pervasive social stigma and exclusion. Earlier this year, for example, a massive fire destroyed years of individual waste pickers’ storage and savings, and consumed Mr. Aziz’s business, which he has since begun to rebuild.

And now, everything that the waste pickers have built and rebuilt on their own — both economically and socially — faces demolition. 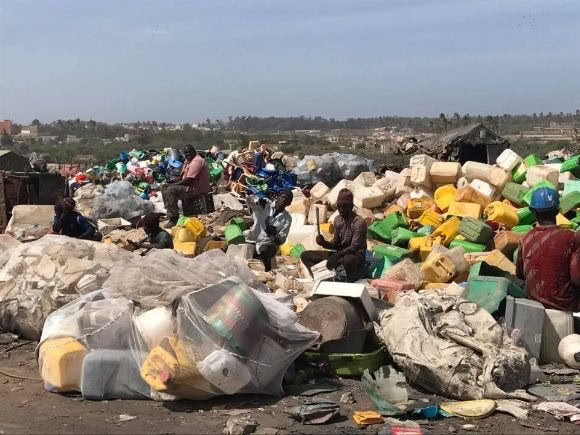 The waste pickers at Mbeubeuss are not alone in their fight to make their work recognized and valued. In fact, they are part of a seemingly invisible global workforce that provides environmental services to cities without recognition, compensation, or protection.

UNHabitat reports that in many cities, high rates of waste recovery (50-80 per cent) can be attributed to the work of waste pickers, who provide a “positive externality which the municipality enjoys without having to pay for it.”

According to UNHabitat, waste pickers provide a “positive externality which the municipality enjoys without having to pay for it.”

Rather than being recognized for their contributions, waste pickers at Mbeubeuss have been threatened with displacement multiple times over the years. Now, with the World Bank-led upgrading project, part of the dump will likely be closed, although the project plans are still opaque.

Eight months after the contract was signed, representatives from the World Bank and the Senegalese government body that manages solid waste, UCG (Unité de Coordination de la Gestion de Déchets Solides), have shared few details publicly. The waste pickers, who are working at the Mbeubeuss dump site every day, have yet to be engaged in a consultative process about the project. 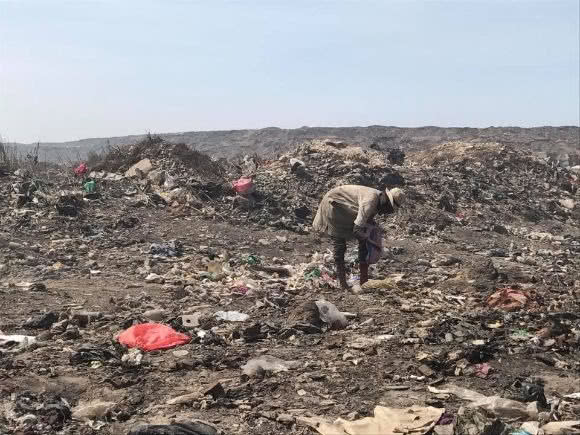 The future of open dumps in an increasingly urban world

This project and others like it illuminate a complicated situation about the future of urban waste.

On the one hand, the dump site presents very real hazards. Waste pickers at Mbeubeuss and other open dumps face serious occupational risks, such as inhalation of toxic gases, the threat of injury or death from dump trucks, unstable ground, and fires. Deadly landslides and collapses at dumps in Ethiopia and Guatemala in recent years underscore how dangerous work on dumps can be for waste pickers. In its current form, the open dump is also an environmental hazard, contaminating the air, water, and soil over time and creating health risks for surrounding communities in the process.

To deal with this, municipalities have taken to making sweeping decisions to shut down the sites entirely, or to partner with players, including the World Bank and private companies, to adopt new systems for final disposal of solid waste.

The problem is that in the process, waste pickers are often either displaced entirely, or provided with compensation that provides a temporary fix but leaves them without a source of employment, and without a way to put their specialized skills and knowledge to use.

Municipalities have taken to making sweeping decisions to shut down the sites entirely, or to partner with players, including the World Bank and private companies, to adopt new systems for final disposal of solid waste.

Bokk Diom is keenly aware that if the project progresses as many dump closures and upgrades have in other cities across the world, it could result in the displacement of waste pickers not only from their source of livelihood, but also from their homes and from the supportive community that they have collectively built over the years.

WIEGO calls on the World Bank, the government of Senegal, local authorities, and UCG to ensure that Bokk Diom and the récuperateurs of Mbeubeuss are engaged in a participatory process as part of the dump-upgrading project.

But this does not have to happen. Alternatively, through this project, the World Bank and the government of Senegal have the opportunity to recognize waste pickers’ long-standing role as environmental agents and to leverage their expertise in the waste sector for mutual gain. Below are examples of how this has been possible elsewhere in the world. WIEGO calls on the World Bank, the government of Senegal, local authorities, and UCG to ensure that Bokk Diom and the récuperateurs of Mbeubeuss are engaged in a participatory process as part of the dump-upgrading project.

Read more about the contributions of waste pickers to cities. 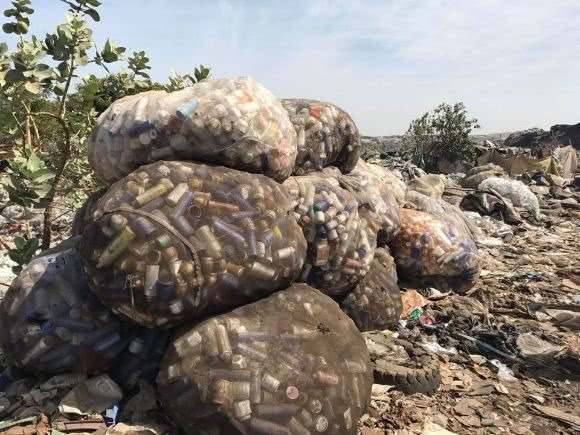 Wise waste management through inclusion and integration of waste pickers

The waste pickers of Mbeubeuss already have the knowledge and skills to make solid waste management systems work better, but they need to be formally integrated, and provided proper compensation and protection from occupational health and safety risks. There are promising examples from other cities where waste-picker integration following dump upgrading or closure has worked for both workers and municipalities.

For example, when the Estructural dump in Brasilia was closed in early 2018, a plan was already in place for waste picker integration. Nearly 1,200 of the 2,000 waste pickers at Estructural have been integrated into the solid waste management system as service providers.
During the transition, they were provided with financial compensation, as well as capacity building and support in recycling and cooperative formation. They subsequently organized into cooperatives and were provided access to five sorting centres, where they are contracted to provide recycling services to the city.
For those waste pickers who wanted to transition out of the work, courses and training were provided in different types of skills. All of the waste pickers leaving Estructural were registered in the cadastro unico, which provides a first step in accessing social assistance programmes.
While the process was not free of conflict, it was developed through a participatory process involving the Brasilia Committee for Inclusion of Waste Pickers (CIISC in Portuguese), a multi-stakeholder committee including representatives from waste picker cooperatives, government agencies, NGOs, and universities. The committee is also playing a role in ongoing monitoring of the transition plan’s implementation. There is also an independent monitoring committee with national and international organizations that oversees social and environmental impacts of the dump closure.

A similar scheme was put in place in Itaúna, Brazil, where waste pickers on the city’s open dump organized into a cooperative, Coopert, which was subsequently successful in negotiating with the city government for a contract as a service provider in the collection of recyclables.
While the transition from open dumps will look different depending on the context, these examples point to a few key lessons that could apply to the process at Mbeubeuss:

Bokk Diom means “Shared Respect” in Wolof (the predominant language in Senegal). Through their work, Bokk Diom has consistently demonstrated respect — to the environment, to their community, and to the city — by providing a vital service in extremely difficult conditions.

For a successful dump upgrading project at Mbeubeuss, the Senegalese government, the World Bank, and UCG must show the waste pickers due respect and recognition in return by involving them in every stage of the dump upgrading project, from its definition to its implementation and governance.