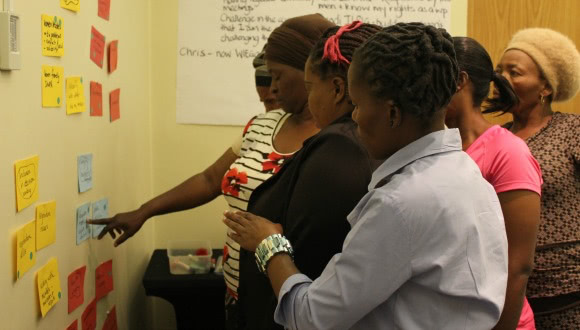 Women waste pickers face many challenges in pursuing their livelihoods – and their gender identity is among those constraints. For example, they may not be allowed access to high-value recyclables, and they may be less likely to hold positions of authority in membership-based organizations. In addition, their earning power can be limited by the need to balance domestic duties, including raising children and caring for the home.

Over the last couple of years, WIEGO’s Organizing and Representation Programme and Urban Policies Programme have been working with waste picker organizations in South Africa and Brazil to identify the unique needs of women working in this sector and how those needs can be addressed. On this International Women’s Day, we go behind the scenes with waste pickers from these two countries to explore how they engaged in the process.

The Basadi Buwang Programme grew out of a request from a Cape Town-based group of women waste pickers associated with the South African Waste Pickers’ Association (SAWPA) around the time of its formation. These requests coincided with WIEGO’s collaboration in an action-research project on women in waste management led by the International Labour Research and Information Group (ILRIG).

WIEGO and ILRIG agreed to jointly organize an exploratory workshop for women waste pickers in South Africa, in collaboration with SAWPA, to meet the following objectives:

Phase 1: A national workshop for 30 women waste pickers was facilitated by WIEGO and ILRIG to introduce the concept of working with women waste pickers to explore their experiences and to begin to identify strategies to address their challenges from a position of strength. The women expressed the need for political and practical strategies enabled by political and technical support.(May 2015)

Phase 2: The outcome of the national workshop and plans to continue working with the women at a local level was presented to the SAWPA National Conference in July 2015.

Phase 3:  Three areas were identified where in-depth listening sessions and capacity building interventions would continue. The three areas were identified on the basis of existing women’s activism and organization thus Sasolburg (including Boitshephi Landfill and Vaalpark Recycling Project); Pretoria(Onderstepoort Landfill site where there are existing cooperatives of waste pickers) and Pietermaritzburg(area of ongoing struggle between workers and the local authorities for access to an MRF) were selected. (November 2015 – March 2016)

Phase 4:  In the fourth phase a reference group of ILRIG, WIEGO, and representatives from each of the above three sites was formed. The reference group reflected on the outcomes of the listening sessions to develop a programme that would begin to address both Practical and Strategic Gender needs towards empowerment, that has been expressed by the women.

Phase 5: The fifth phase is the implementation of the  Basadi Buwang Programme.  A capacity building programme for women waste-pickers to address the gender-based challenges and issues that they face at home, in their communities, in their workspaces and their organisations. (Ongoing)

The photos that follow capture key moments and findings in the process.

Patricia Kheswa prefers the autonomy of waste picking because it gives her flexibility. However, as “modeled” in the photo, she and many other women working on the New England Landfill not only collect recyclable waste material but also items for personal use. Patricia’s full outfit, including the handbag and shoes, are items that were dumped. (Photo: WIEGO, Listening Session held in Pietermaritzburg, South Africa, March 2016)

Mamphesane Lebitsa, a proud mother, wants her children to see what her workplace on the Boitshepi Landfill site looks like because, as a waste picker, this is where she earns a living to raise her family. (Photo: Jonathan Torgovnik/Getty Images Reportage, Boitshepi Landfill in Vanderbijlpark, Free State Province, South Africa, August 2015)

Chris Bonner and Vanessa Pillay lead a discussion on what to call the waste picker programme. They decide on the "Basadi Buwang Programme". (Photo: J. Barret, Reference Group Workshop)

Thembelihle Ngcobo, a young woman waste picker, was introduced to the profession by an older woman in her community who noticed that she had been unemployed for a long time after completing school. (Credit: WIEGO, Capacity Building Workshop 1, Pietermaritzburg, South Africa, August 2016)

In a group discussion on public perceptions of waste picking and how waste pickers would like to be seen, waste pickers engage in exercises on building self-esteem. The words on the flipchart translate to “people look down on us”. (Photo: WIEGO, Capacity Building Workshop 1, Pietermaritzburg, South Africa, August 2016)

Another group in the discussion on public perceptions wrote, “We want to be recognised as workers, earning a living to raise our children.” (Photo: WIEGO, Capacity Building Workshop 1, Pietermaritzburg, South Africa, August 2016)

At the same time in Brazil, WIEGO was engaged in a collaborative project involving waste pickers in Latin America which shed light on the multiple levels of discrimination that women waste pickers face and their needs. The Gender & Waste Project – a partnership between WIEGO, the Women’s Research Center (NEPEM) at the Federal University of Minas Gerais (UFMG), the NGO Insea, and the national waste picker movement (MNCR) – addresses gender inequality in waste picking activities, extending to the inequality women waste pickers face at home, at work, and as leaders within their representative organizations.

The following pictures represent the different activities and stages of the Gender & Waste Project in Minas Gerais, Brazil.

Four regional workshops were held in the state of Minas Gerais with women waste pickers to discuss challenges to gender equality, ranging from issues such as women’s economic autonomy, care responsibilities at home, and gender-based violence, to the need for skills training to strengthen their leadership roles. (Photo Credit: Sonia Dias)

A participant represents her group’s reflection on gender roles and what has improved for women in society today and for women as waste pickers. (Photo Credit: Ana Ogando)

In April 2015, participants from the workshops, along with men and women waste pickers from across Brazil and Latin America, came together to learn first-hand about the impacts of the project. (Photo Credit: Lina Mintz)

Based on the learnings from the regional workshops and women’s interests in improving their communication and leadership skills, a workshop led in a partnership with the Belo Horizonte chapter of the International Coaching Federation (ICF) was held in May 2015. (Photo Credit: Sonia Dias)

During 2016, Brittany Thomas, an undergraduate student, visited Minas Gerais and documented the Gender & Waste Project as a volunteer. She held a portrait exhibit with women waste pickers who participated in the project, and developed a short video on how the project was relevant for women and men waste pickers. (Photo Credit: Ana Ogando)

Panelists at Expocatadores discuss the different ways women waste pickers can participate in politics and learn about their rights. (Photo Credit: Ana Ogando)