Millions of people worldwide make a living collecting, sorting, recycling, and selling materials that someone else has thrown away.

Waste pickers contribute to local economies, to public health and safety, and to environmental sustainability. While recognition for their contributions is growing in some places, they often face low social status, deplorable living and working conditions, and get little support from local governments. Increasingly, they face challenges due to competition for lucrative waste from powerful corporate entities.

The term “waste picker” was adopted at the First World Conference of Waste Pickers in Bogota, Colombia in 2008 to facilitate global networking--and to supplant derogatory terms like “scavenger”. Preferred terms vary, however, by place. For example, in South Africa "reclaimers" and "bagerezi" are used. In the United States, "canners" is often used. Other languages have their own preferred terms: catadores in Portuguese, recicladores in Spanish.

Waste pickers collect household or commercial/industrial waste. They may collect from private waste bins or dumpsters, along streets and waterways or on dumps and landfills. Some rummage in search of necessities; others collect and sell recyclables to middlemen or businesses. Some work in recycling warehouses or recycling plants owned by their cooperatives or associations. (See basic categories of waste pickers for more.)

What waste pickers have in common is that this work is their livelihood and often helps support their families.

Waste picking provides crucial income for people and households. For 65 per cent of the IEMS sample, earnings from waste picking were the main source of household income. Only about one quarter had any other income.

In Belo Horizonte, Brazil, waste pickers said their cooperatives create opportunities for people, sometimes “taking them off the streets.”

Others profit from waste pickers’ work. Many waste pickers sell to buyers, who then sell the material for a profit. Waste pickers also pay private carriers and transport drivers.

Dias, Sonia M. 2012. Not to be Taken for Granted: What Informal Waste Pickers Offer the Urban Economy. The Global Urbanist.

By gathering garbage from public spaces, waste pickers contribute to cleanliness and help beautify the city.

Waste pickers divert a significant quantity of materials from the waste stream. A 2007 study found waste pickers recovered approximately 20 per cent of all waste material in three of six cities studied. The study found more than 80,000 people were responsible for recycling about 3 million tons per year of waste across the six cities.

Recycling is one of the cheapest, fastest ways to reduce greenhouse gas emissions. Recycling reduces emissions 25 times more than incineration does (Tellus Institute 2008)—yet privatized incineration increasingly displaces waste pickers around the world.

Reuse and recycling of materials decreases the amount of virgin materials needed for production, conserving natural resources and energy while reducing air and water pollution.

In many countries, waste pickers supply the only form of solid waste collection at little or no cost to municipalities. 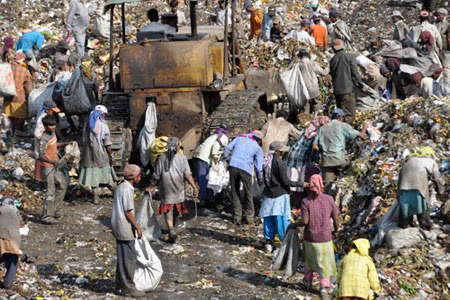 While it is known that millions of people worldwide earn their living from recycling or reusing waste, reliable statistical data is difficult. Waste pickers are mobile and their population may fluctuate by season. Also, waste pickers may avoid researchers, fearing information will be passed on to public officials.

According to statistics published in Women and Men in the Informal Economy: A Statistical Picture (ILO-WIEGO 2013), where waste pickers have been identified, they represent less than 1 per cent of the urban workforce:

These small percentages, however, represent large numbers of people. Because of the challenges of gathering data on waste pickers, estimates may be low.

The IEMS study found that the majority of waste pickers had generally low levels of formal education. In many places the work was done by primarily disadvantaged groups. For example in Pune, India, waste picking remains confined to the Scheduled Castes. And in many cities, migrants with few other employment options had taken up this work. 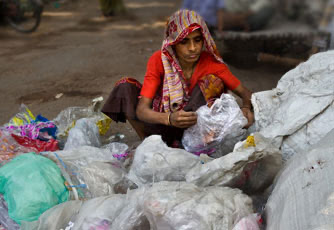 Waste picking is often a family enterprise. It offers flexible working hours (especially important for women) and a high level of adaptability. It is easily learned and requires no education and little training. And for many of the poorest people around the globe, it is one of the only livelihood options.

Waste pickers in the IEMS cities echoed these concerns, with 73 per cent indicating access to waste is a moderate or major problem.

Waste pickers’ earnings vary widely between regions, by the type of work they do, and for women and men.

The IEMS captured total turnover for waste pickers, but not incomes, since it did not consider input costs. In Belo Horizonte, Brazil, where waste pickers are recognized and supported by governments and organized into strong cooperatives, waste pickers appear to have higher incomes than other informal workers. By contrast, waste pickers in Nakuru, Kenya subsist on meagre returns. The average turnover of respondents in Nakuru – before accounting for expenses such as storage or transportation – was under US $2/day.

Waste pickers require adequate space for sorting and storing collected materials. In the IEMS, 59 per cent said inadequate space is a problem. Without storage, material cannot be held until it can fetch a higher price; unsheltered materials can be degraded or ruined by weather.

Macroeconomic trends like inflation and recession impact waste pickers. The rising cost of living and the increasing numbers of waste pickers, including migrants, were the most cited problems affecting all waste pickers in the IEMS study.

The global recession hit waste pickers hard.Research conducted by WIEGO and its Inclusive Cities partners found the economic crisis caused a marked drop in the demand for and price of waste. At the same time, newly unemployed people entered the profession. For more, see Informal Economy/Links with Economic Crisis.

Within value chains, waste pickers are in a disadvantaged position. Most in the IEMS study reported difficulty negotiating better prices from buyers, and focus groups in almost every city ranked exploitative or dependent relations with buyers among the most significant negative drivers.

Harassment is a significant problem. Treated as nuisances by authorities and with disdain by the public, waste pickers are usually ignored within public policy processes and may even be arrested or physically assaulted. They may face exploitation and intimidation by middlemen, which can affect their earnings. Overall, 47 per cent of waste pickers surveyed in the IEMS indicated that harassment was a key issue affecting their work. In Bogota and Durban, the problem was reported by over 80 per cent of waste pickers.

Women engaged in this occupation typically earn less than men and often face other forms of inequality. In 2012, the Latin American Waste Pickers’ Network (Red Lacre), the National Movement of Waste Pickers in Brazil (MNCR), and WIEGO opened created a project about gender in the context of waste picking or informal recycling. Access resources and tools that resulted from the project.

Handling waste poses many health risks. Informal waste pickers are exposed to contaminants and hazardous materials, from fecal matter and medical waste to toxic fumes and chemicals. Those who work at open dumps face risks caused by trucks, fires and surface slides. Some must take collected waste home to sort or store, introducing dangers to the home. A lack of worker protection and poor access to health care aggravate these risks.

Waste pickers also endure ergonomic hazards such as heavy lifting and repetitive motion, and may experience back and lower extremity pain. Through its Social Protection Programme, WIEGO worked on occupational health and safety (OHS) for waste pickers. One facet of the project involved the design of more ergonomically appropriate equipment. In India, working with the waste pickers’ union KKPKP and the Self-Employed Women’s Association (SEWA), new pushcarts were designed and tested. Waste pickers using the new carts could carry an extra bag of refuse worth about 20-25 rupees in earnings. One woman reported saving 400 rupees in medical expenses after using the SEWA equipment. 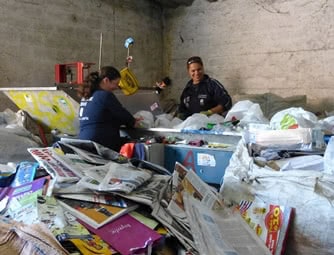 Whether and how informal waste pickers are included in municipal waste systems varies greatly. Worldwide, most waste pickers are not recognized for their contributions and do not have access to state-sponsored social protection.

An exclusionary policy environment harms livelihoods. In Bogotá and Durban, more than 89 per cent in the IEMS sample said regulations and by-laws regarding waste are a problem.

A supportive policy environment positively impacts waste pickers’ livelihoods. The Belo Horizonte municipality partners with waste pickers and their organizations, providing infrastructure, subsidies and worker education. Despite some concerns raised (such as deteriorating infrastructure) during the IEMS focus groups, 63 per cent said they get positive support from the city.
Replacement of repressive policies with inclusive policies focused on legal backing, redistributive measures, social recognition and the strengthening of waste picker organizations is crucial. For examples of regulatory initiatives with positive outcomes, see Waste Pickers and the Law. 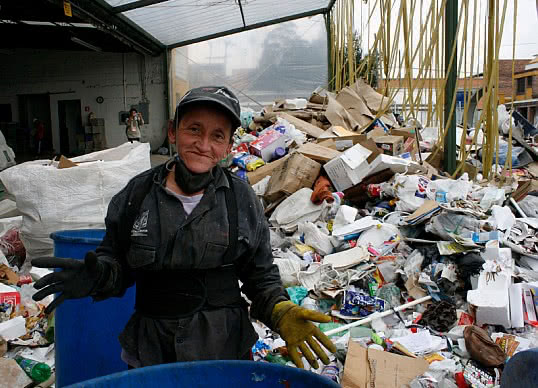 Waste pickers are increasingly motivated to organize and fight for recognition. In an increasing number of cities, waste pickers have formed collectives to advocate for their inclusion in municipal planning around solid waste management.

In some countries, such as Brazil, Colombia and India, waste pickers now have the right to sell to or bid on contracts with the municipality.

Through the Global Alliance of Waste Pickers, waste pickers have taken the world stage at international climate change conferences and events to highlight the need for global policies that help, not hinder, their work. Learn about Waste Pickers’ at UN Climate Change Negotiations.

In 2013, waste pickers’ organizations played an active role at the International Labour Conference (ILC) 2013, where “Sustainable Development, Green Jobs and Decent Work” was the theme. Read the delegation’s report.

A global database called Waste pickers Around the World has been established with the help of WIEGO and the Global Alliance of Waste Pickers.

Samson, Melanie. 2009. Refusing to be Cast Aside: Waste Pickers Organising Around the World.

WIEGO. 2013. Waste Pickers: The Right to Be Recognized as Workers.