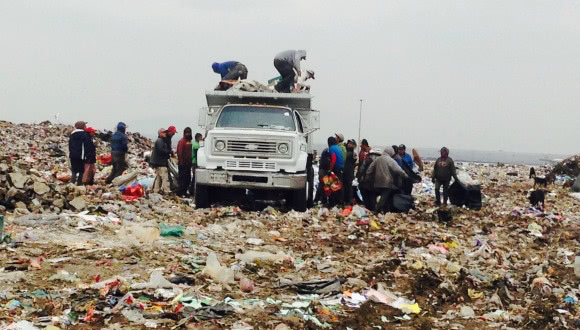 In August 2016, Mexico City's Commission on Human Rights (CDHDF) issued the first-ever recommendation on waste management service to address the labour conditions of the city’s waste pickers. It includes measures that the central government and the delegations (municipalities) should implement to guarantee the labour rights of waste pickers who provide the services of collecting, sorting and transporting recyclable materials at no cost to the city. The recommendation also calls attention to the need to design a social security scheme for waste pickers; to prevent work-related diseases; to provide adequate equipment and work facilities; and, given the particular vulnerability of these workers, grant special state protection.

The recommendation is an important move by the commission to shift the relationship between the city government and waste pickers towards recognition of their work. Tania Espinosa Sánchez, Latin America Coordinator of WIEGO’s new Law Programme and a board member of the commission since May 2016, discusses the recommendation and tells us why the restructuring of the government-waste pickers relationship has the potential to promote decent work, improve precarious working conditions and respect basic human rights.

What is the current situation of waste management in Mexico City and how do informal waste pickers fit in?

TES: The operation of Mexico City's public waste management falls, in some instances, under the central government, i.e. the Mexico City Government, and, in other instances, under the district governments (Mexico City is divided into 16 districts). Both levels of government contract people to carry out waste management services, and, at the same time, they rely on unpaid labour in order to cover all street sweeping and collection routes, as well as to run the waste selection and treatment plants.

In the sweeping and collection stages, there are approximately 10,000 workers, called “volunteers”, who live from the tips they receive from people to take their garbage away and the sale of recyclables selected from the garbage. That activity is known as pre–pepena.

In Mexico City, there are two operational waste selection and treatment plants, which are run by unions of pepenadores (waste pickers), who are responsible for separating the recyclable materials from the waste moving through conveyor belts. The pepenadores make a living from selling the recyclables. Their approximate numbers are unknown.

What are the working conditions and challenges faced by the city’s waste pickers?

TES: Informal waste pickers work under the government's plans and infrastructure without a contract, salary, or labour rights. Their informal status further leads to discrimination.

The main challenge they face is the lack of recognition as workers by the government, and this is caused by the absence of contracts. Consequently, they have no salary, employment security, social security, or any other work-related benefits. Many of these workers even have to buy their own uniforms.

The recommendation cited the following issues:

How did this recommendation by the Mexico City's Commission of Human Rights   come about?

TES: The Recommendation is the result of the compilation of 10 cases. The first was initiated in 2012 as a result of a CDHDF investigation after a landfill site closure resulted in piles of solid waste appearing in different public areas of the city. Other public complaints were related to bad service, infrastructure management, and working conditions.

A worker filed another complaint saying he didn't have hygienic and safe conditions because he wasn't provided with the right working tools, having therefore to work in an unhealthy and unsafe manner. A similar case referred to the poor conditions of the camps and warehouses, where people who perform the waste management work.

The informal waste pickers (trabajadores voluntarios) file complaints as well. One of them spoke of working as part of the waste management system without any salary or benefit—without ever being hired or being offered a contract. In another complaint submitted by street sweepers and waste collectors, these workers stated that they've been requesting a contract for more than 10 years without this being provided.

Also, in 2012, in my capacity as a citizen, I presented a discrimination complaint to the CDHDF for the lack of public waste management service that existed in poor neighbourhoods. Soon, more citizen complaints followed. I watched the situation closely, although once I was appointed as a board member of the CDHDF in May 2016, I had to withdraw my complaint and it was not part of the recommendation.

Are there any points in the recommendation that stand out for you as particularly innovative?

TES: Yes. The recommendation states that “authorities regard volunteer workers as part of an inferior and invisible category, since having an informal status results in the discrimination and undermining of their labour rights”. This is an innovative insight because it is the first document issued by a public institution that recognizes that it is the informal status that generates discrimination from public policies and highlights it as a human rights violation that has to be addressed.

It also recognizes that even though “waste pickers/sorters or volunteers are informal workers, it does not mean they have no rights. In this respect, their informal condition isn't an excuse for failing to provide adequate equipment, necessary training and, most of all, a salary”.

The recommendation also states the government’s complicity in allowing these undignified working conditions to persist by “breaking its obligations not just in the protection but also in the respect, safeguard, and promotion of their human rights”.

CDHDF is clear when it argues that besides violating the right to work, the existing system also undermines the right to enjoy equitable and favourable working conditions, the right to social security, and the right to remuneration.

Is there anything missing from the recommendation you feel should be included?

TES: Yes. Although the recommendation has a good section on the breach of human rights and a good section on reparations, in their totality, these are not reflected adequately because the commission doesn't mention any authority accountable for creating contracts or wage mechanisms.

The recommendation specifies how the labour/economic exploitation occurs between the leaders of sorting facilities and informal waste pickers, but there is not an explicit recommendation aiming to eradicate such dynamics or to formalize the work relations in these facilities, although the law mentions the Secretariat of Public Works and Services (SOBSE) should be managing them.

Furthermore, one of the recommendations refers to the responsibility of political delegations to take a census of informal waste collectors (trabajadores voluntarios) and train them to create cooperatives. It is unclear why there is not a similar recommendation for waste sorters (pepenadores) in the sorting facilities when different parts of the document point to the exploitation occurring at their facilities.

Why is this recommendation important?

TES: It is the first document submitted by a public institution that describes the logic of the subsistence economy to which informal waste pickers are subjected. And it is the first to recognize them as workers regardless of their informal condition and to establish in detail the continuous breach of rights they experience.

The recommendation establishes affirmative actions, referring to an important ruling of the Colombian Constitutional Court (T-742/03) and notes that its implementation “must aim to reduce the vulnerability of this population by generating mechanisms for various forms of protection, including legal, financial, social security, subsidies, grants, economic support, and work training, gradually regulating their participation in the integrated management of solid waste”.

How could the notion of an inclusive model become institutionalized despite the changes in local government administrations over time?

"Volunteer" waste collectors cling to the back of a truck on their collection route through the city. Photo: Tania Espinosa Sánchez.

What are the next steps with the recommendation and how can it be used?

TES: The first and most important step is towards the education of the workers because many of them do not know they have rights or how to demand them. Without a doubt, it is also essential to use it for the education of public service providers performing functions related to waste management and who also do not know that informal waste pickers are legal subjects that have to be integrated.

The recommendation is the perfect pretext to strengthen the informal waste pickers’ organizations and generate mechanisms to increase their visibility and voice. It is a text that workers can and must use for advocacy.

Finally, legally, it is a document issued by a public institution that can be used in strategic litigation. This means that the recommendation is just the start in the fight for the recognition of informal waste pickers' rights in Mexico City.

Read details of the recommendation here.