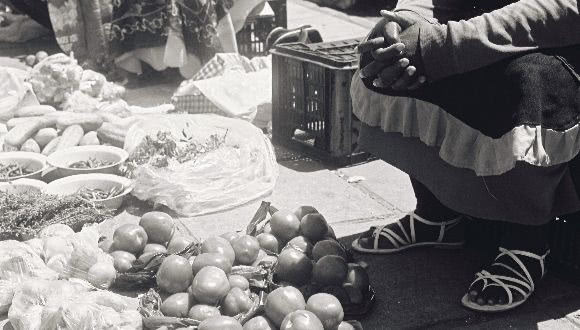 From street vending permits to permissions to collect waste from public spaces, regulating the vast and diverse informal workforce in cities in the Global South doesn’t have a simple solution. That became even more apparent earlier this year when the International Labour Organization (ILO) held its fifth conference on the topic of regulating for the future of decent work. The ILO’s concern with regulation is not surprising since firms and employers are increasingly relying on a flexible workforce through the use of temporary, short-term, and otherwise precarious employment practices. Terms such as the “gig” or “sharing” economy illustrate that employment has changed dramatically over the past twenty years, and there is now much more risk and far less certainty for many employees. Under such conditions, a focus on regulating the standard employment relationship – which typically includes a focus on working conditions, employment security, and the provision of social protection – makes sense.

But in the Global South, the standard employment relationship is not, and never has been, the norm. Consequently, a discussion of regulation requires a different focus. In many developing countries, most workers are informally self-employed and one of the conventional narratives is that these workers actively avoid regulation. Some even argue that the informal economy is comprised of small firms that remain informal by evading regulations. But our research contradicts these myths.

In 2015, we conducted research with the Informal Economy Monitoring Study (IEMS), which revealed a more nuanced relationship between regulation and informal employment. Based on data from street vendors and waste pickers in eight Global South cities, we examined the aspects of urban regulation that are related to public space as a place of work and considered how urban regulation can not only hinder, but also help these workers generate more stable incomes and operate within a more predictable environment. We found that, in contrast to the typical narrative, some self-employed workers would actually prefer more regulation to increase their work security. A one-size-fits-all approach to regulation, therefore, is not particularly helpful in understanding the needs of the self-employed in the Global South.

Local-level regulations play a major role in the lives of urban informal workers. We wanted to understand how workers – in this case, waste pickers and street vendors – perceive the regulations affecting their work (see Figure 1 below). Not surprisingly, we found that waste pickers are much more likely to report that regulations that determine when and where they work are not transparent. About 38 per cent of waste pickers in the sample strongly disagreed with the statement that local regulations are clear. Street vendors were more receptive to the statement on the whole, but about 45 per cent registered some level of disagreement with the claim that local regulations are transparent.

However, when we asked about the enforcement of these regulations, we found a different story. As suggested in Figure 2, the single largest group of both types of workers reported that the regulations directly affecting their work are not enforced fairly or equally. More than half of all of these workers reported a negative perception of the enforcement of regulations. Therefore, among waste pickers, the general perception is that regulations are neither transparent nor fairly enforced, while street vendors were evenly split on the issue of transparency but largely negative about the implementation and enforcement of local-level rules and regulations.

Therefore, even among the self-employed, the role of regulation varies for different types of workers. What is transparent and evenly enforced for one group may be perceived as unfair and harmful by another.

Figure 1: "Municipal rules and regulations which affect my work are clear and easy to understand"

Figure 2: “These municipal rules and regulations are enforced fairly and equally for all workers” 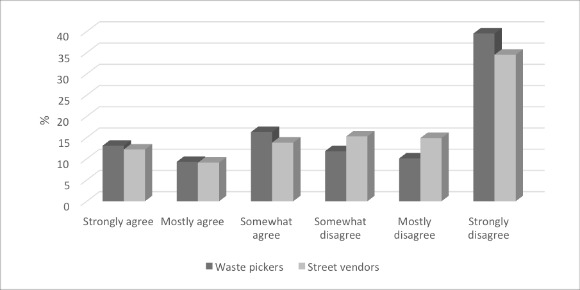 While regulations differ in terms of both transparency and enforcement, we also wanted see how informal workers actually understand how regulations impact their work. In a series of focus groups, we asked waste pickers and street vendors from Durban, South Africa, and Nakuru, Kenya, to describe the role of urban regulations in their working lives.

Permits and licensing can both help and hurt

Street vendors are some of the most visible informal workers, selling their food and wares in public places across the Global South. Not surprisingly, in both cities, spatial regulations were the most common types of regulations mentioned. In Durban, street trading permits are used to control which traders have access to space. Participants in three focus groups identified the positive role that permits play in increasing traders’ access to markets. In this context, via a permitted stall where there is steady pedestrian traffic, the permits contributed to stable earnings.

Importantly, one group recognized that this positive regulation had evolved over time with the city’s effort to better regulate street trade: “When we started street trading, police were harassing us, saying we were not authorized to operate our businesses,” said one participant. “The sector evolved; permits were introduced. We now have permits and are trading with ease, not fearing harassment from police.”

Four focus groups in Nakuru, which has a licensing system for street vendors, also identified the positive role that licenses can play in earnings stability: “The municipal license is good, because when you have it, they don’t harass you,” said one women trader, referring to the local authorities. Those in Nakuru who hold licenses also enjoy municipal cleaning services, which keep their workspaces clean and attract customers.

However, some groups also noted that the permit system was not enforced adequately, and that inadequate enforcement undermined the stability of their earnings. For example, seven focus groups with street vendors in Durban and one in Nakuru said the spatial permit or licensing regime is not communicated or enforced evenly. As a result, unpermitted or illegal traders sometimes steal their customers, undermining their earnings.

Another common theme in the street vendor focus groups – 13 of 15 groups in Durban and seven of 15 in Nakuru – was that even if they do hold a valid permit, it does not always provide an effective right to trade. Police still come to harass them, often impounding their goods for minor or imagined transgressions. And when they follow the procedures for recovering the goods, they are never recovered in the same condition or amount as they were when impounded.

Both street vendors and waste pickers also identified either workplace regulations or workplace conditions as a major contributor to unstable earnings. For Durban’s waste pickers, the lack of even informal permission to collect recyclables at the dumpsite dominated the discussion and featured in several of Nakuru’s focus groups, as well. Conversely, three groups in Durban that work at sites other than dumps said the municipality had established a workplace and provided secure storage to protect their materials while they accumulate enough volume to sell, shielding them from earnings losses incurred when materials are stolen.

For waste pickers, urban planning regulations also affected how they use public space in settings other than dump sites, and the Nakuru focus groups generated several mentions of regulation playing a positive role. Those groups in Nakuru who hold licenses for recycling activities said that the municipality allows its trucks to help them, provides security and other types of assistance, including allowing formal firms to donate recyclable materials directly to informal waste pickers. These examples are, of course, not only about the regulations themselves but also about the ways in which they – and the laws and policies from which they derive – are enforced. But it is important to note cases where informal workers are arguing that more regulation, not less, would or already does help stabilize their earnings.

The role of labour regulation in the standard employment relationship is important, but it does not have much relevance for the self-employed. In the Global South, urban regulations are far more important and play both positive and negative roles in creating a stable and predictable working environment. While most of the discussion on regulation is related to firms and small enterprises and focuses largely on registration, our research demonstrates the need to consider the different types of regulations that affect self-employed, own account workers in the informal economy. If the goal is to move some of these workers along a continuum of “formality”, a crucial starting point has to be the local-level regulations that affect urban workplaces and, in particular, the way in which these regulations are enforced.

In thinking through the implications for regulating for decent work in the informal economy, a starting point may be the way in which the social contract, or the balance of rights and responsibilities between workers and the state, is viewed at the local level for the majority of workers in the informal economy. One focus group thought it unfair that they pay rental fees for their street stalls, on the one hand, but don’t get a voice in policy affecting traders, on the other hand. Another said, “They make us pay a lot of money for conducting business on their premises, but they don’t attend to our queries.” Others said they are not against paying for permits but they feel the cost is too high relative to their earnings. And many study participants juxtaposed the amount they pay to city authorities for permits, stall rental, and other fees against what they get in return from the city.

For some, what they get in return is nothing. They feel they should get some benefit (toilets and shelter, for example). For others, they would prefer to get nothing to what they do get: a steady diet of police harassment that prevents them from earning. One participant in this category said: “The only time the police come fast is when they are coming to confiscate our goods, but if people have stolen your goods and you call them you will never see them coming to help you.” Another said simply: “The police should leave poor people alone.”