Habitat III was the United Nations Conference on Housing and Sustainable Urban Development. The Habitat III process lasted over a year, and involved a range of meetings, consultations and policy discussions geared towards generating input for a global urban development agenda. The WIEGO Network was active throughout this process, which culminated in the adoption of the New Urban Agenda (NUA).

WIEGO’s goals for the Habitat III process were to create spaces for informal workers and their representative organizations to have their voices heard, to make visible the positive contributions of informal livelihoods to cities, and to advocate for urban policy approaches that result in greater livelihood security for urban informal workers. The efforts of WIEGO Network delegates and team members are reflected in the NUA document - which establishes a commitment to improving outcomes and enhancing voice and representation for informal workers:

“We commit to recognize the contribution of the working poor in the informal economy, particularly women, including the unpaid, domestic, and migrant workers to the urban economies, taking into account national circumstances. Their livelihoods, working conditions and income security, legal and social protection, access to skills, assets and other support services, and voice and representation should be enhanced. A progressive transition of workers and economic units to the formal economy will be developed by adopting a balanced approach, combining incentives and compliance measures, while promoting preservation and improvement of existing livelihoods.” - Excerpt from the New Urban Agenda, 2016

At the Habitat III summit in Quito, Ecuador from 17 - 20 of October 2016, government officials, urban scholars, grassroots groups, and civil society representatives from around the world came together to discuss urban issues, and urban policy and planning strategies, with a particular focus on the implementation of the NUA.

A WIEGO Network delegation made up of informal worker representatives, researchers, organizers and technical support individuals participated in a range of events at Habitat III in Quito, with the goal of promoting participatory and inclusive implementation of the NUA. Prior to the Habitat summit, the WIEGO MBO Network developed a platform outlining how local and national governments should work towards implementation of the agenda in a way that supports urban informal workers.

Some of the main events that the WIEGO Network Delegation participated in and/or hosted include:

This event highlighted the outcomes of WIEGO’s collaborative 5-year Inclusive Cities Project in Asia, Africa and Latin America. The objective of this event was to provide a unique platform to bring together important project findings and recommendations for policymakers, urban activists and city planners on engaging with organizations of urban informal workers. During the event WIEGO Programme Strategy Advisor Rhonda Douglas presented on the project background and findings, explaining how the project work strengthened MBOs of informal workers in organizing, policy analysis, and advocacy so to equip them with the tools necessary to make themselves heard in urban planning processes.

WIEGO Delegation members Namrata Bali of SEWA Academy, Juliana Afari-Brown of the Informal Vendors and Hawkers Association of Ghana (IVHAG) and Nohra Padilla of the National Association of Recyclers of Colombia (Spanish acronym ANR) spoke about the impact of and learnings from project activities within their respective organizations. Highlights included: improved occupational health and safety within markets in Ghana, strengthened capacity for organizing and advocacy among informal workers in Ahmedabad, and the establishment of an inclusive solid waste management system in Bogota. 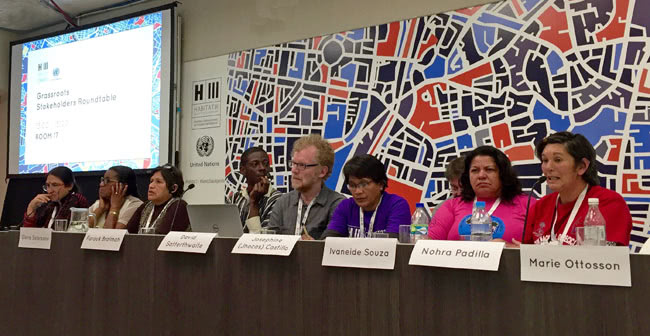 The Grassroots Roundtable brought together members of grassroots networks, including WIEGO, Shack/Slum Dwellers International (SDI) and the Huairou Commission, to discuss their achievements, concrete strategies and demands for more sustainable and inclusive urban development. WIEGO delegates Nohra Padilla of ARB and Ivaneide Souza of Redesol spoke about their experiences working with the municipalities of their respective cities (Bogota and Belo Horizonte) to create more inclusive waste management systems. WIEGO delegate Gloria Solorzano (of Muheres), spoke about her organisation’s experience negotiating with municipal agents in Lima, Peru for the right to vend for street vendors. The panel was moderated by Namrata Bali of SEWA Academy. 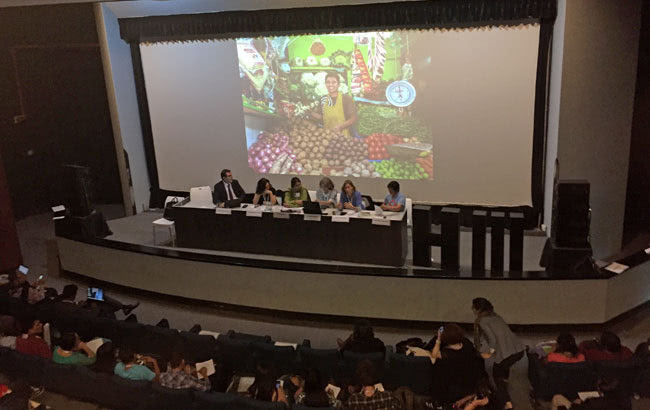 In this session, moderated by WIEGO Consultant Alison Brown, WIEGO Delegates Gabi Olguin of the Confederation of Workers from the Popular Economy in Argentina (Spanish acronym CTEP), Namrata Bali, Nohra Padilla and WIEGO UPP Director Sally Roever challenged participants to re-think traditional notions of productivity - especially by considering structural barriers faced by informal workers and what enhancing productivity means to them. Highlights included: Namrata’s account of the work of the Mahila Housing Trust in securing basic infrastructure services, Nohra Padilla’s discussion of formalization as not only imposing costs on informal workers but also extending benefits and recognition, and Gabi’s description of the power of organization in achieving lasting change for informal workers. Edmundo Werna from the ILO also spoke on the panel, calling attention to the need for decent work in cities.

“If our productivity is low, this owes to a deficiency on the part of the state, society, and the sectors that design “production” Why? For example, in the case of recyclers, in most places people do not separate their waste, so we have to separate it, we take 100 kilos of waste to recycle 10. Is that the fault of the recyclers? 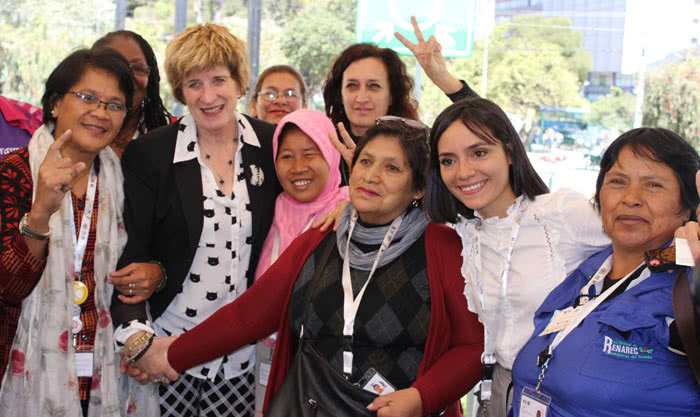 Between Habitat events, members of the WIEGO Delegation, SDI and Huairou Commission had the unique opportunity to meet with Kate Gilmore, the Deputy High Commissioner for Human Rights, to discuss the experiences and human rights concerns of their constituencies. WIEGO Delegation participants brought perspectives from India, Peru, Ecuador and Argentina, and from occupational groups including street vendors, home-based workers and recyclers. They called for labour rights, recognition and social protection, among other things.

“Our objective has always been full employment and self-reliance, and they are directly related to human rights because full employment means secure livelihoods, assets, shelter, security of health and child care” - Namrata Bali

“The phenomenon of informal work is not transitory or passing, it is one that the global economic system produced and it is here to stay. The labour rights that we don't enjoy should be seen as human rights that all of us have the right to enjoy.” - Gabi Olguin 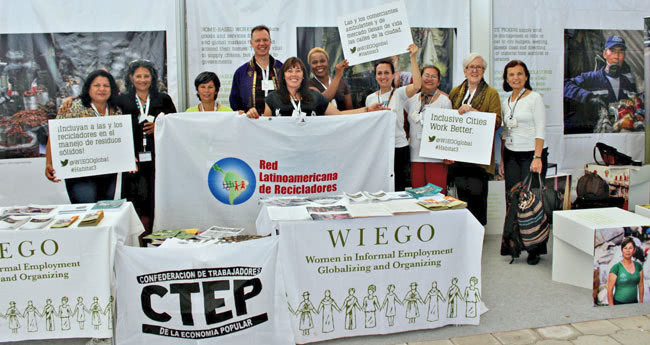 In addition to participation in the above events, the WIEGO Delegation disseminated information and engaged with Habitat III participants at the WIEGO booth in the Habitat III exposition area. The booth provided an opportunity for delegates to discuss both specific efforts within their respective MBOs and to share about WIEGO’s work more generally.

Next City: "Connecting Economic Opportunity to the New Urban Agenda"