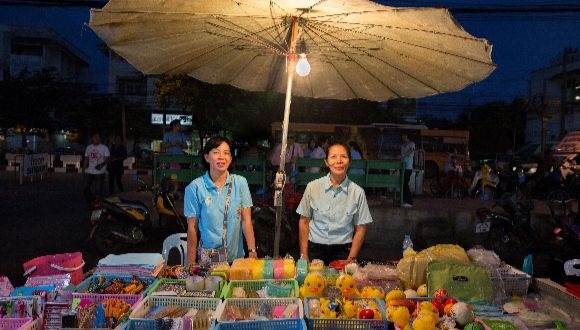 In Bangkok, a series of municipal crackdowns to “clean up” the city has put its world-renowned street vendors under threat. The fight to establish their place in the city — both as important economic contributors and as key players in creating vibrant neighbourhoods — is not unique, and it’s one New York’s street vendors know well.

That’s why in a move of solidarity, Sean Basinski, co-director of the New York Street Vendor Project (SVP) and Lei Bai, a member of SVP’s leadership board who sells works of art in the heart of Times Square, joined vendors in Bangkok to share how they got organized and continue to fight for their place on New York City’s streets.

Read about our Focal Cities work in Bangkok. 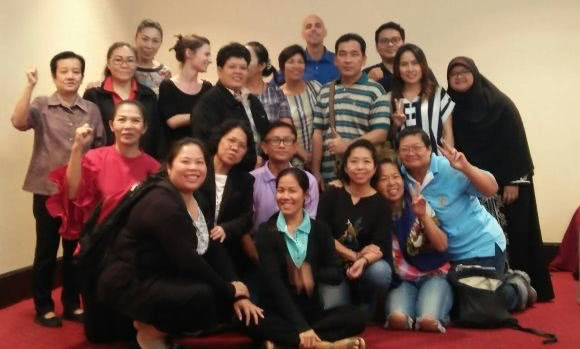 Street vendors are increasingly being recognized as key players in developing dynamic cities, yet their presence in public spaces — on sidewalks and in parks — continues to provoke constant harassment and ire from authorities. During WIEGO’s Informal Economy Monitoring Study, street vendors in five cities — Accra, Ghana; Ahmedabad, India; Durban, South Africa; Lima, Peru; and Nakuru, Kenya — cited “abuse of authority” as one of the three top hindrances to earning their living in all cities. Another key issue identified was the licensing and regulatory restrictions.

He explained that licensing in New York, like in many cities, is a very big issue.

“The problem of where to sell is the same everywhere,” says Basinski.

He explained that licensing in New York, like in many cities, is a very big issue. “If you have a license and you follow the rules,” he says, “you have the right to work.” However, he adds that there is always an issue of too few licenses, and if vendors do have a license, there are many rules to follow — keeping a certain distance from subway station or crosswalk, conspicuously displaying vending licenses, keeping all items on or within the pushcart, to name a few. Breaking any of these many rules is expensive: tickets range from $50-$1,000 USD. Like in Bangkok and many other cities, New York police may also confiscate the goods of vendors, and, at times, arrest them.

These experiences resonated in Bangkok. Raywad, one of the founders of the Bangkok Street Vendor Network and a Bangkok vendor who was at the meeting and also at the World Urban Forum the previous week in Kuala Lumpur, Malaysia, recalled the solidarity. “I found out that people all over the world are facing these kind of problems,” he says. “Some panellists cried during the presentation [at the World Urban Forum]. We have learned a lot from Lei and Sean. Even though they are from a developed country, they still have problems of eviction.”

Read about WIEGO’s participation in the World Urban Forum 9.

How New York Vendors Got Organized, and Why This Matters

New York street vendors have a long history of organizing in their respective neighbourhoods. However, it wasn’t until Basinski, who sold burritos on 52nd Street and Park Avenue to earn money before law school, formed the Street Vendor Project (SVP) that vendors from across the city came together to fight for their rights. The SVP, a membership-based organization, was established in 2001 and has grown to over 2,000 members from all five boroughs of New York.

The organization has worked to address exclusion from key existing vending spots and to combat future plans for neighbourhood bans on vending.

Bai describes how they recruit members through vendor-to-vendor outreach: “We talk to people in the street, invite them to come to the office and build power together.”  The SVP’s members are diverse, coming from countries across the world and speaking a myriad of languages, sometimes making the organizing task challenging.

The organization has worked to address exclusion from key existing vending spots and to combat future plans for neighbourhood bans on vending. To do that, SVP trains vendors on their legal rights and responsibilities, plans demonstrations, publishes reports and files lawsuits to raise public awareness about vendors and the contributions they make to New York.

The NYC vendors are connected internationally as well — SVP is an affiliate of StreetNet International.

Basinski and Bai shared some of their tactics — from outreach to building alliances to conducting effective advocacy drives — and offered the Bangkok vendors these three strategies for moving ahead:

Thai vendor leaders were energized by the discussion and the exchange. Poonsap Tulaphan, director of HomeNet Thailand, which has supported organized home-based workers and domestic workers in Bangkok and is now focusing its energy on street vendors, said the meeting gave them important ideas for moving ahead.

Basinski felt the palpable energy to get serious about becoming organized, noting that it is a step-by-step process.

“It’s very difficult to get things started — lots of details. You need to think of a mix of talk and action,” he says. “I am impressed with how serious this group is. I know that when we come back next time, this group is going to be so much stronger.”

Feature photo: BANGKOK, THAILAND: Surunya Jindawiwat (left) and Suree Wongtrakul (right) are street vendors in Bangkok's Economy Square. Like many street vendors around the world, they have struggled to secure their right to vend. To tackle this issue, they have formed a savings group and a cooperative to strengthen their organization and recently joined HomeNet Thailand to connect with other informal worker groups. Photo: Paula Bronstein/Getty Images Reportage