‘It’s a Win-Win:’ How a Street Vendor Leader Used Recommendation 204 to Change Policy in Costa Rica 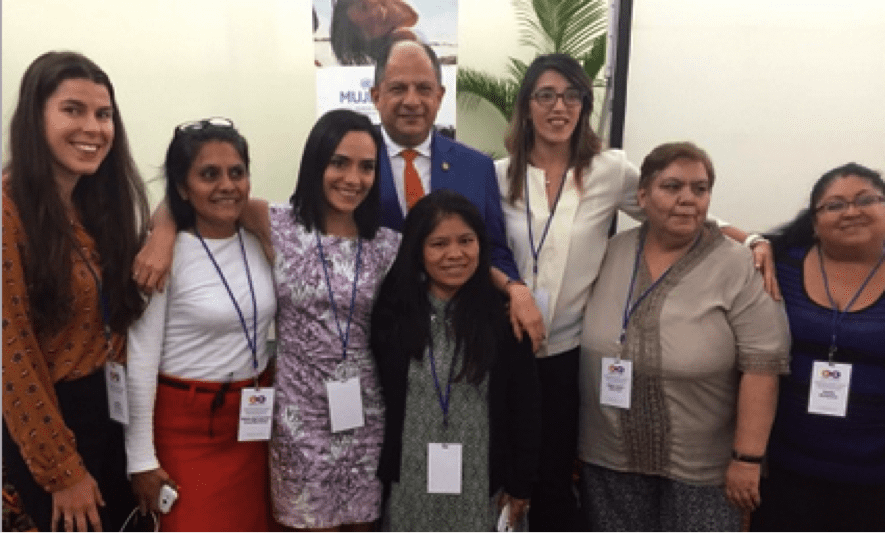 In July 2016, Kattia Barquero Rojas, a street vendor leader from San Jose, Costa Rica, stood in front of the president of her country and a panel of dignitaries to tell them about the challenges she and other street vendors face – and, importantly, what these policymakers could do to better support them.

Kattia was part of the WIEGO delegation at an event for the United Nations High-Level Panel (UN HLP) for Women’s Economic Empowerment being held in her city. WIEGO has served on the UN HLP – an initiative created by the UN Secretary General to define an agenda for improving economic outcomes for women – with the objective of bringing the voices of women informal workers into the process. The President of Costa Rica, Luis Guillermo Solis, serves as Co-Chair of the UN HLP with the National Minister for the Status of Women, Alejandra Mora, as his deputy. Both were present at the July event in San Jose.

As the Gender Secretary for SINTRACOPEA, a membership-based organization of street vendors in San Jose, and Secretary of the Confederación Unitaria de Trabajadores (CUT), a national trade union confederation, Kattia aimed to give voice to the needs of her fellow workers at the event. During her intervention, she urged the president to take note of the precarious situation of street vendors in Costa Rica and asked him to review ILO Recommendation 204 on the Transition from the Informal to the Formal Economy, which provides guidance to governments on facilitating the transition of informal workers and firms, preventing the informalization of formal jobs, and increasing the offer of formal employment.

After the event, she approached President Solis to hand over a copy of the WIEGO Network Platform on the Recommendation, encouraging him again to read it and consider how Costa Rica might use the Recommendation as a guide towards improving conditions and prospects for informal workers. She subsequently followed up, this time with Minister Mora, in a meeting to discuss the unique challenges facing informal workers, especially women, in Costa Rica.

Just three months later, in October 2016, the government of Costa Rica signed a tripartite agreement with representatives from business and labour (including the CUT, to which several organizations of informal workers, including Kattia’s, are affiliated) to develop and implement a national strategic plan on the transition to the formal economy. Under the agreement, representatives from all three groups have six months to collaboratively develop the plan in line with Recommendation 204.

We recently caught up with both Kattia and Minister Mora to learn more about how the agreement came about, what their hopes are for its implementation, and what advice they might offer other governments and worker groups on how to collectively work for the economic advancement of women in the informal economy.

After the ILO issued Recommendation 204 at the 2015 International Labour Conference (ILC), Kattia’s organization immediately began to study it, hold trainings on it, and think about how they could take advantage of the increased international attention on informal work. Of the Recommendation, Kattia says it “is basically a tool, a tool that speaks of public spaces, growth, entrepreneurship, economic impulse, and that highlights the weaknesses and opens certain doors for promoting formality and for reducing informality in this country.”

Kattia approached President Solis and Minister Mora about the Recommendation at a time when they were particularly open to discussing solutions for informal workers, both because of their involvement in the UN HLP, and their increasing commitment to promoting decent work as a pathway to development in Costa Rica. As Minister Mora explains, “Our country requires a better public policy aligned with a vision of equitable development, and this vision of equitable development must take a path to improve the inclusion of the most vulnerable. We have chosen the path to promote work – decent work, quality work – and that means that for some groups that do not have decent work and that require affirmative action to obtain it, we have to do specific work for them.”

Minister Mora recognizes that the transition to the formal economy must not only involve an increase in the offer of formal jobs, but must also increase protections and opportunities for informal workers. She explains that the plan resulting from the agreement must address several challenges, including how to reduce structural barriers for informal enterprises to formalize, and how to increase incentives, especially in the area of social security.

Minister Mora feels that it is critical for the government to show its commitment to this process through immediate concrete actions. As she explains, “With human rights you are always working with ‘utopias’, but if, in the process, you are not taking concrete actions, then it can seem to be only talk and not real possibility of change.”

To this end, the government is already making progress on two fronts for domestic workers: to provide a subsidy that would allow part-time domestic workers to register with the national social security system, and to assure that they are paid at least the national minimum wage.

Although the plan for implementation of Recommendation 204 has yet to fully take shape, Kattia sees the agreement itself – the first tripartite commitment focused on informal work in Costa Rica – as a major step towards increased visibility of informal workers and recognition of their economic contributions and needs. As she puts it, “We intend for all of this to make more visible the needs of a sector that is so broad and so important and that has been made invisible.”

When asked what they would recommend to other governments and worker groups to replicate their experience with the agreement, Kattia and Minister Mora both stress the importance of strategic alliances. For example, Kattia says her ability to advocate successfully for informal workers has much to do with the alliance that her organization of street vendors and organizations of domestic workers have made with organized labour in Costa Rica. Specifically, through affiliation to the trade union confederation CUT, they have been able to formally engage and make their voices heard in the process of adopting the agreement. She explains, “You have to achieve unity of organized labour so that this force will allow you to get there.”

Minister Mora echoes Kattia’s sentiment about alliances, saying, “We have to understand the need for collective work. Virtuous alliances are those where you are able to really make the advances possible. No institution or government alone – not the United Nations system alone, not entrepreneurship alone – will move things if there is no strategic alliance.”

For Kattia, informal workers and their representative organizations must also learn to take advantage of strategic moments – like the one created by the adoption of Recommendation 204 by the ILO. Recognizing that Recommendation 204 placed a spotlight on informal workers, Kattia’s organization successfully used it as a tool for contextualizing and legitimizing their demands locally. As she explains, “You must focus very much on where you are going and take advantage that the eyes of the world are on informality; you have to know how to take advantage of this moment.”

Both Kattia and Minister Mora hope that their actions can serve as an example of how through dialogue and cooperation, informal workers’ representative organizations and governments can work together for mutually beneficial outcomes. Kattia emphasizes that recognizing and including informal workers in economic planning has the potential to benefit the economy as a whole, fostering “a sustainable economy that is of the people.”

Minister Mora adds, “It is crucial to understand that the inclusion of the workers in the formal economy is a ‘win, win’ – the system wins, the fiscal system wins, social security wins, but, above all, the people win.”