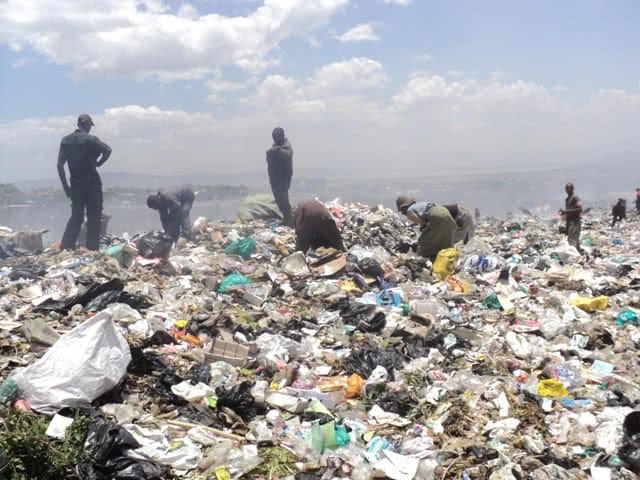 Things are not easy for those protecting the Earth.

Two recent landfill disasters have exposed the dangerous realities for those who make a living off of the world's waste. Just a few days ago, a garbage dump on the outskirts of Colombo, Sri Lanka, gave way, burying nearly 30 people who lived at its base. Last month, waste pickers on a dumpsite in Addis Ababa, Ethiopia, were buried alive by tons of trash. The huge landfill where they were working suddenly collapsed, and entire families lost their lives.

The scale of the tragedy was enormous, but it was not the first time these workers have faced such on-the-job hazards. In addition to spending their days touching and breathing toxins, fecal waste and hazardous material, waste pickers have lost lives and limbs in landfill machines and have faced collapses at dumpsites around the world. But the Addis Ababa catastrophe is certainly one of the deadliest tragedies to occur as a result of waste management: more than a hundred people disappeared below Ethiopia’s garbage, just a month before we celebrate Earth Day.

Academics and activists working and studying waste picking and informality tend to argue that these 20 million people worldwide recycling our waste are environmental agents. While some consciously are, most waste pickers are just urban dwellers, surviving off our wasteful civilization. By inventing ways of producing income to maintain their families, these workers do contribute to preserving our Earth. For example, they reduce the amount of waste being dumped. They also contribute enormously to the recycling industry, and, by doing so, help to reduce the consumption of virgin materials, which are often difficult to find in our resource-exhausted Earth.

Although waste pickers make many environmental contributions, they face many challenges in their work. They are dispossessed from waste by capital-intensive technologies and by special private services competing with the informal and historical recycling services. This tendency is increasing rapidly as the new driver around waste.  Given that the world population consumes the equivalent of 1.6 planets a year, then why are those saving our resources so threatened and forced to work in conditions so undignified?

If we really care about our Earth, we should be caring for and protecting those vulnerable communities who are contributing (consciously or not) to maintaining our planet.

Decades of trashing our planet

We have been polluting the Earth with our waste for decades, even centuries. In the early 19th century, rivers and oceans were the main dumping ground. New York City used to dump its trash into the Hudson River. These short-sighted practices were not only being committed by the biggest cities on Earth; small ones, like my hometown of Montevideo, Uruguay, used to throw their waste into local rivers, as well. However, back then, the amount and the type of waste produced was far less complex in quantity and quality than it is now. Still, it is hard to imagine that it became practice to dump a society’s discards into one of its most precious resources: its local water sources.

Over time, we started changing our habits, as well as public policies associated with waste management. The solution evolved into another form of polluting our planet – and this time it was the air. Municipal governments started the “incineration era”, where they burned literally all the waste that they produced, generating air contamination due to the lack of filters and proper technology.

Again, a mix of government will and citizen pressure changed the process. This time, the solution was to dump our waste far from the cities. And, thus, the “dumpsite era” began. Health and sanitation were the primary driving forces for waste removal as a public responsibility. This lasted from 1850 to 1970 in some places, and in some others, particularly developing countries, dumpsites continue to reign.

Concern about our planet only began to appear in the 1960s. Rachel Carson’s landmark book, Silent Spring, is recognized as the turning point in awakening our environmental consciousness. Shortly thereafter, in the 1970s, waste management began to be seen as a new environmental driver – one that started focusing on recycling as a “resource concern” and, more recently, as a means to climate change mitigation.

Today, tragically, the most predominant driver around waste management is free-market profit and business interest. This change has been detailed in “What a Waste”, a report by the World Bank. According to the report, in 2012 there were three billion people living in urban areas, each producing approximately 1.2kg of waste per day. By 2025, the World Bank estimates that 4.36 billion people will each be producing 1.42 kg per day.

What do these figures mean in terms of costs for solid waste management? The estimated 2012 costs of $US205 billion per year for handling waste in our cities will increase to $US375 billion in 2025, which will be a nightmare for those worried about Earth, and a huge opportunity for those looking for new business. Seventy percent of that global cost increase will happen in developing countries, which means a big conflict for those informal recyclers already in charge of handling recyclables in their cities.

In early 2017, the International Solid Waste Association (ISWA) launched a global campaign to close the biggest dumpsites around the world. They presented a video showing the terrible conditions of waste pickers living and working at dumpsites in the Global South. At the end of the short film, they say, “It is about people, not waste”. A question immediately came to my mind: “Seriously? Is the coalition involving the biggest waste management companies really concerned about people?”

Months later, the tragedy at the Addis Ababa dumpsite gave me the clearest answer to my question. At the same time that over a hundred people were buried under a pile of waste in the most terrifying and undignified conditions, a multi-million dollar project for turning waste into energy was being built in the same city. The company involved in the building of the waste-to-energy facility has extended “their deepest, and sincere condolences to the many families who have lost loved ones in the recent landslide.” What’s more important is that instead of these technologies, the city could have invested in education, recycling and composting with the inclusion of those recyclers who today no longer exist.

If waste management is a public responsibility and, thereby, a political act, we need to ask ourselves what world we envision for our children from a solid waste management perspective. How we can think differently? Which interests do we really want to stand for? We are at a turning point, facing a conflict of two paradigms: the neo-liberal agenda versus the inclusive model. It is becoming hard to reconcile the two sides while at the same time caring about the future of our Earth.