The Truth about How Dakar’s Clothes Get Cleaned 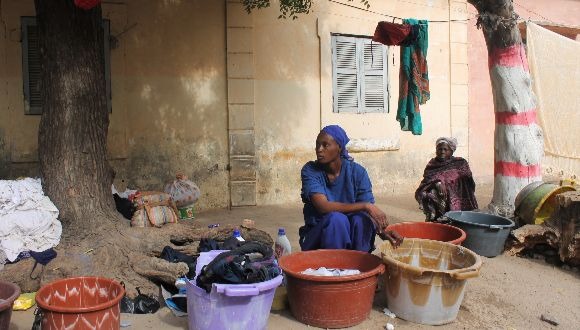 In Dakar, Senegal, the city’s dirty laundry doesn’t get cleaned on a spin cycle.

Each day, women across the city spend back-breaking hours hand-washing the lot: thousands of pounds of dirty clothes, sheets, towels, and blankets. Often strapping a young child to their backs, the laundresses wait for prospective clients to approach them from their informal posts along the city streets.

Laundresses often work side-by-side out in the open, and together they muscle their way through a repetitive, physically demanding routine: scrub, rinse, twist, dry. The washing often takes place in public spaces, adding to the vulnerability of already unsteady and precarious work.

As part of WIEGO’s new Focal Cities initiative in Dakar (FC Dakar), Coordinator Adama Soumaré has been conducting exploratory visits with laundresses in various areas of the city to learn more about their experiences and the challenges they face. In the process, he has found the laundresses to be “one of the most vulnerable groups of informal workers” in Dakar.

They are hired on a daily basis, and may spend days without working. During the rainy season, their earnings drop even further, as drying clothes becomes challenging. Also, working in public spaces presents a host of challenges: they are at risk of evictions and harassment and they have to keep constant watch over their children, who often accompany them, on the busy city streets. Also, the non-stop squatting, bending, and lifting presents occupational health and safety risks and takes a physical toll.

Historically, laundresses in Dakar have been largely ignored by public officials, despite their contributions to the local economy. “Laundresses are ignored by public officials. As a matter of fact, they are categorised as ‘domestic workers’ (travailleurs domestiques et gens de maison) by Senegalese law, whereas most of them do not interact in private domestic spaces,” says Soumaré. “That means that the relationship they have with their client and, a fortiori, public authorities is different from that of domestic workers, who have one direct employer.”

The initial exploratory meetings between FC Dakar and the laundresses built on the organizing work started by a local women’s rights organization, AFEME (Association des Femmes de la Médina) and a local NGO, REDA (Réseau Droit au Développement pour d'autres Alternatives). The meetings culminated in a decision by the laundresses to form a union, which will take place during their first general assembly on April 8, 2018.

This photo essay takes us through the daily lives and challenges of Dakar’s laundresses.

Laundresses are among the poorest and most vulnerable of informal workers in the city. Many are rural migrants who travel to Dakar to seek work as domestic workers or laundresses. Many work to send money home to their families in the villages they left behind.

Laundresses discuss some of the challenges they face in their work. When laundresses lack regular clients, they are forced to go door-to-door to meet daily needs. Some go days without any clients, especially in the rainy season. The instability of earnings puts a strain on their households, and some, especially those traveling back and forth between rural villages and the city, end up homeless.

Laundresses need to work in public spaces, setting up their buckets, washing powder, and water jugs on the sidewalks. They find creative solutions for drying, often hanging clothes from fences, lines, and wires. However, these solutions can also be dangerous; earlier this year, a laundress was seriously injured after falling while attempting to hang some of her wares from a high wire.

Having to conduct their work in public spaces puts the laundresses under constant threat. They sometimes face evictions and harassment from authorities. Their children, who often accompany them for lack of another option, either stay strapped to the women’s backs or play on busy sidewalks and streets, which creates additional stress for the laundresses as they are faced with juggling work and supervising their children.

Laundresses expressed an urgent need for childcare solutions. Having to carry their children impedes their earning power and also exposes the youngsters to health and safety hazards at their various workspaces across the city, including dangerous cleaning agents.

Public laundry work requires many clunky tools, including large plastic buckets and water jugs. The women leave these tools at their workplaces overnight. Theft is a major issue, further cutting into their earnings.

Dakar is a fast-changing city, and the women are concerned about a space and place for their work. Voicing their concerns is a first step. After they are formally organized, AFEME and FC Dakar aim to continue to support the laundresses in strengthening their collective voice in dialogue with authorities around the problems they face and some possible solutions they have discussed. Some of these solutions include public provision of child care, public washing stations, and health-oriented projects. Stay tuned for more news!