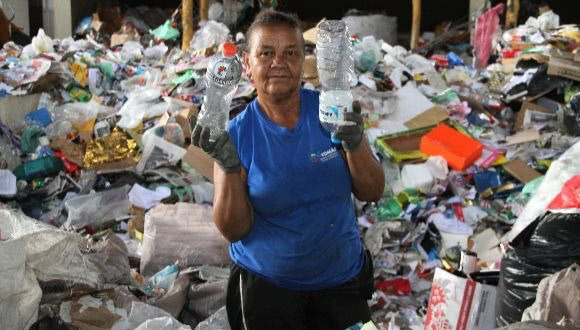 Brazil has been a global trailblazer when it comes to integrating waste pickers in solid waste management systems. But its progressive policies didn’t happen overnight. In fact, a highly coordinated communications effort in the small, southeastern city of Belo Horizonte supported the awakening of a national movement. From song and dance in the streets to widespread signage to talks in schools, the Belo Horizonte Sanitation Agency turned their public awareness campaign into a priority – and an art form in itself.

“We took communications and social mobilization seriously,” says Sonia Dias, WIEGO’s Waste Picker Specialist, who is based in Belo Horizonte and was previously part of the city’s Sanitation Agency during this 10-year communications effort. “It was actually written into our solid waste management policy, and we created a Social Mobilization Department.”

A communications effort that’s both playful and targeted

The new department housed the city’s recycling efforts, as well as a motley crew of experts – architects, engineers, educators, sociologists, psychologists, and artists – and was charged with shifting the old habits and mindsets that existed around waste and what to do with it. The strategy was both an internal and external one: it focused on changing the public’s perception of the city’s waste pickers, (known as catadores), as well as the Sanitation Agency’s staff.

For many, waste pickers were seen as criminals or vagrants rather than environmental agents and workers with rights. The department also needed to get people to separate and segregate waste at home and bring it to recycling containers that were set up around the city (Belo Horizonte has since implemented door-to-door collection).

Waste picker organizations were engaged along the way, providing inputs into the city’s policy and learning about the power of a coordinated communications and social mobilization plan. Waste pickers were being humanized in the effort, and their voices were being heard. Many catadores spoke in front of students and community groups to talk more about what they do and how and performed in skits after training with theater experts.

Watch this video on the role waste pickers play environmentally.

A waste picker performs in the slums of Belo Horizonte to educate the public on recycling. Photo: S. Dias

In addition to engaging the waste pickers, the communications effort also focused on using Brazil’s lively culture to catch people’s attention. The department held a recycling carnival and parade and developed a choir with songs focused on segregating waste. The group performed in churches and across the city. Members of the department gave talks on local busses and went to after-work watering holes in an initiative called “Bar to Bar,” engaging with residents as they enjoyed drinks. Once a month, at stoplights, performers would stage “quick skits” on issues ranging from discouraging throwing waste out car windows to enticing people to be collaborators in keeping the city clean. It was hard to miss the buzz around recycling.

The department developed specific materials and programmes for the various segments of society: schools, community associations, religious institutions, community health agents, and even the formal city-employed waste workers who often viewed the catadores as competition or a threat. The department held special programmes to bridge this divide, developing training and providing literacy programmes for both.

Despite the noise they were making, Dias says the department’s budget was minimal, so they had to be creative. They targeted mobilizers in waves, letting these leveled targets be multipliers in spreading the message. Initial efforts focused on a core network of partners, rippling out to schools and other institutions and then on to mass action: the city and the citizen.

The message reaches across Brazil

Soon, officials from across the country were traveling to Belo Horizonte to see what all the hype was about. Eventually, in a major step forward, this experience was one of the main inspirations for the establishment of a national waste and citizenship forum; recycling and the informal recyclers were being taken more seriously as important actors in solid waste management.

“Today, catadores are being talked about more positively,” says Dias. “They are seen as environmental contributors.”

In 2010, Brazil enacted a forward-looking National Solid Waste Management Policy (PNRS) that stands as a model for Global South countries. It recognizes waste pickers’ cooperatives as service providers and, as a result, institutes a number of mechanisms to support cooperatives and municipalities that integrate informal workers into solid waste systems.

The policy came about on a diversity of fronts, but Belo Horizonte’s creative and consistent messaging certainly played a part. Changing mindsets requires thoughtful planning and time, but as Brazil’s waste pickers can attest to, the efforts have elevated their image and given them a more respected role in tackling the country’s waste.