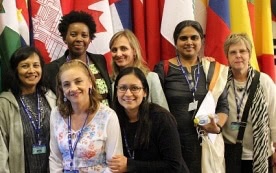 FRIDAY, JUNE 21 - An instrument on Ending Violence and Harassment in the World of Work has been adopted at the 108th session of the International Labour Conference (ILC) in Geneva. This is a significant victory for informal workers—especially women—whose organizations advocated tirelessly to ensure ILO Convention 190 can protect some of the world’s most vulnerable workers.

In 2019, WIEGO joined efforts with our Network partners from IDWF, StreetNet International, HomeNet South Asia, SEWA and IUF in sending delegations to bring the voices and experiences of the most marginalized workers, and hence the most at risk of violence and harassment in the world of work.

It was expected that the ILC would vote on whether to adopt a Convention on the Elimination of Violence and Harassment in the World of Work. View a diagram on the ILO Standard Setting Procedure (pdf).

This ILC marked the 100th anniversary of the International Labour Organization (ILO). Discussions on the Future of Work, “green” work, and other relevant topics were held.

In this position paper, WIEGO congratulated the ILO and made the case for the including the majority of today's workers as crucial to the future of work.

WIEGO’s ally, the International Domestic Workers Federation (IDWF), brought a strong delegation to highlight the persistent violence and harassment that domestic workers face on the job.