Extending Social Protection to Women and Men in the Informal Economy 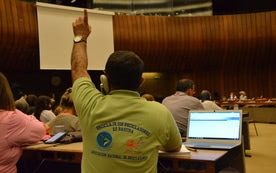 ‣ Interventions of our delegates

For the first time in its history, the 109th International Labour Conference (ILC) was held virtually due to restrictions and changes imposed by the COVID-19 pandemic. The items of the ILC agenda this year were divided in two parts. The items on the 3-19 June segment included a special outcome document on the ILO response to COVID-19 and a recurrent discussion on social protection. After the meetings in June, the ILC resumed its work in November.

WIEGO and its Network Partners worked since the onset of the pandemic, across sectors and with a range of people and organizations, to organize affiliates at national and regional levels to call on governments to accelerate investments in worker protections as a central component of economic recovery plans. Yet throughout the year, workers in the informal economy faced limited relief, ongoing exclusion, and continued violence and harassment in many contexts. In response to the gaps in national social protection systems, organizations of workers in the informal economy played a central role in providing relief. Some organizations were involved in social dialogue, implementation and last mile delivery of government social protection programs.

During the ILC two-week sessions, a delegation of workers representing the Global Alliance of Waste Pickers, the International Domestic Workers Federation (IDWF), HomeNet International, SEWA, StreetNet International, and WIEGO participated during the virtual meetings to bring the voices and experiences of the most marginalized workers. Together with IDWF leaders representing national delegations from the Dominican Republic, Namibia, Nicaragua, Philippines and South Africa, the workers representing the informal economy shared with ILO participants the need for recognition and national protection systems based on solidarity in financing and mutual support.

The COVID-19 pandemic underscores, now more than ever, that social justice and economic recovery cannot be achieved until every worker has decent working conditions and the contributions they make to society are understood and recognized. Workers in the informal economy are on the frontlines as domestic workers providing care, home-based workers manufacturing personal protective equipment, street vendors and market traders selling food and basic necessities, and waste pickers keeping cities clean.

Discussion with the Network representatives on COVID-19 and its impact on women workers in the informal economy and how to ensure a recovery that takes into account the need to transition from the informal to the formal economy.

10 Years of Resilience: A Celebration of the Domestic Workers Convention 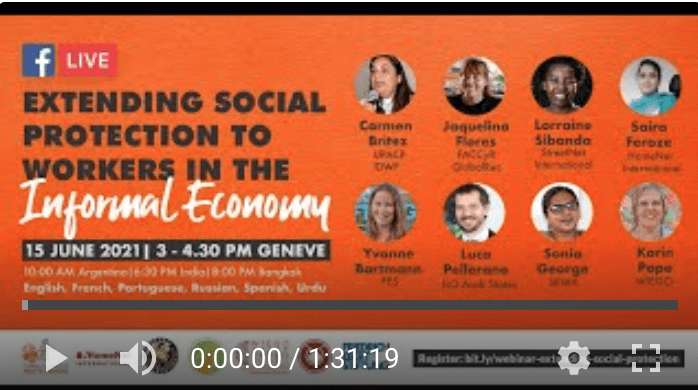 Global Network of Workers in the Informal Economy

In this webinar, leaders representing the informal economy shared experiences and reflections with ILO officials on the need to increase recognition and national protection systems based on solidarity in financing and mutual support. 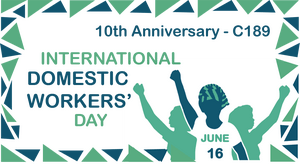 Making decent work a reality for domestic workers. Progress and prospects ten years after the adoption of the Domestic Workers Convention, 2011 (No. 189). ILO.

Human Rights Watch, International Domestic Workers Federation, International Trade Union Confederation, and Women in the Informal Employment: Globalizing and Organizing created the video, which recounts how domestic workers, trade unions, and nongovernmental organizations mobilized to win a treaty that guarantees domestic workers equal protections as other workers, while addressing the rights of children and migrants in domestic work.

Interventions of our delegates