Facilitating Transitions from the Informal to the Formal Economy 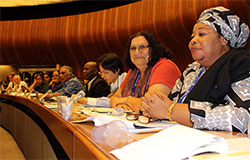 In 2013, WIEGO and SEWA participated in the tri-partite Experts Meeting at the ILO. In 2014, WIEGO organized three regional workshops — in Africa, Asia and Latin America — where informal workers gave their input into a WIEGO Network Platform on transitioning from the informal to the formal economy. The Network platform is available in English, French, Spanish and Russian.

Learn more about preparing the Platform and view videos of home-based workers, street vendors and domestic workers voicing their demands at the ILC 103rd session.

In 2015, coordinated by Chris Bonner, Karin Pape and Pat Horn under WIEGO’s Organizational and Representation Programme, a delegation of 32 informal workers’ representatives, supported by WIEGO, returned to the second part of the negotiations at the ILC 104rd Session in Geneva. Informal workers participated during discussions to ensure their voices were directly heard (see videos below).

The Recommendation contains many provisions that are supportive of informal workers and their rights, including:

It provides that livelihoods are preserved and improved during the process of transition. The task now is to ensure its implementation.

The Recommendation can be downloaded in English, Spanish, French and other languages on the ILO’s site. View a summary prepared by WIEGO: English | español