The WIEGO Network, Partners and informal workers representatives from around the world attended the International Labour Conference (ILC) in June 2014. They voiced their demands as the ILC discussed a recommendation to guide countries in transitioning from the informal to the formal economy.

View videos of home-based workers, street vendors and domestic workers voicing their needs at the Convention.

Participants in action at the ILC 2014 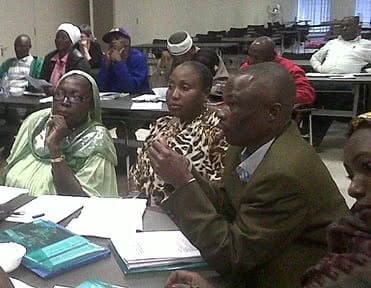 WIEGO and partners shared a platform on formalizing the informal at ILC 2014 in June. The platform sets out common core needs and demands for informal workers.

After months of preparation, WIEGO hosted a series of workshops to gather feedback from representatives of domestic workers, home-based workers, street vendors, waste pickers and other informal workers as well as trade union and ILO representatives. During the workshops, participants were engaged in a participatory process to ensure their voices were integrated into the platform.

Taking the Platform to the International Labour Conference

Coordinated by Karin Pape under the Organizational and Representation Programme of WIEGO, a delegation of informal workers’ representatives and organizers attended the 103rd session of the International Labour Conference (ILC) in June 2014 in Geneva. They shared the Platform and participated in discussions on transitioning from the informal to the formal economy to ensure the voice of informal workers is directly heard.

The full platform can be viewed and downloaded in English, French, Spanish and Russian.