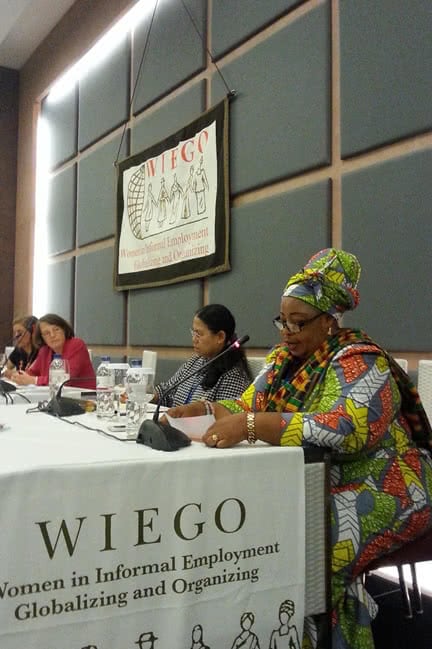 At the end of its General Assembly, WIEGO hosted a public policy dialogue called Formalizing the Informal Economy: Perspectives of Informal Workers in Yogyakarta. The event was attended by WIEGO members and guests from the government, Indonesian trade unions, journalists and others.

And she explained, “Formalizing means something different to different sectors.” For this reason, WIEGO invited representatives from each of the four sectors that it focuses on to provide their perspectives on formalization.

Progress at the International Labour Conference

First, however, WIEGO’s Regional Adviser for Europe, Karin Pape, shared details from the International Labour Conference (ILC), where a standard setting discussion on “Transitioning from the Informal to Formal Economy” is on the agenda for 2014 and 2015. Karin led a delegation of informal workers and technical support from the WIEGO Network at the 2014 discussion.

In advance, WIEGO had hosted three regional workshops to ensure informal workers’ voices and demands were articulated and heard. From these, a platform was developed that puts forward both common demands and demands per sector. Read more.

“This provided a strong set of arguments for us to put forward at the ILC,” Karin said. “But was it really a successful discussion? We did not do so badly. We got about 50 per cent of our points across” (see sidebar).

Pape noted there is much work to be done to improve the recommendation in 2015. For example, the WIEGO Network delegation will be fighting for an explicit reference to local governments, and to ensure supply chains, subcontracting, and subsistence farming are included in the scope of the document. Access to natural resources – very important to sectors such as fisher people and forest people – will need to be addressed. And work must be done to make sure that in excluding criminal activities, (e.g. selling drugs/weapons, human trafficking, etc.), the definition used allows the legitimate activities of informal workers.

Karin noted that certain participants at the ILC did not warmly welcome the informal workers. “There is still a sense within the ILO that these delegates represent NGOs who are challenging the place of trade unions,” she explained. “There was a lack of understanding that these are really workers representing their sector, and that they are elected leaders of trade unions and worker organizations, not NGOs. We have a lot of education left to do with the trade unions.”

Karin Pape concluded by asking the trade union representatives in the room to talk about this with informal workers’ leaders and to include them in their union’s 2015 delegation to the ILC. “They are the experts,” she said.

The WIEGO Network delegation succeeded in having these points integrated into the draft ILC recommendation:

The policy dialogue was moderated by Chris Bonner, Director of WIEGO’s Organization and Representation Programme. She reiterated a point Karin had made: that the transition to formalization will be a long process—that it will not be done overnight.

Then she introduced the informal worker delegates and asked each to speak about what formalization means to their sector, and what the challenges will be. As Chris noted, “The consequences of formalization, depending on the approach, may not all be positive.” 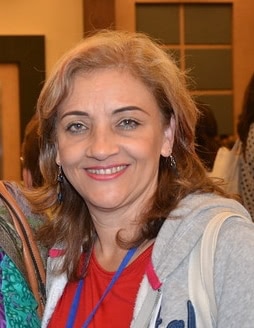 The waste pickers’ movement in Colombia staged a successful demonstration just hours before Martha spoke in Yogyakarta. She reported on this, thanking the assembled for their support, and went on to speak about the importance of networking among waste pickers. She also emphasized resiliency, a characteristic common to waste pickers everywhere. “They are determined to fight and to protect their livelihoods."

The fight has several key features across all regions. “We want to be free from harassment,” she said. “We want to stop the bribes and evictions that municipal authorities subject us to. We are giving a service. Why should we have to pay to serve the municipality and to serve the citizens?”

Rather, Martha said, waste pickers want to be recognized as workers and included as participants in value chains and as part of the municipal waste system. They want to eliminate the middlemen and gain full value for the material they collect and sell.

And she emphasized: waste pickers must be paid for the services they provide.
That, for waste pickers, would be the most positive aspect of formalization. Another positive outcome might be improved infrastructure. “We want equipment to be able to do our work in the right way. We want to change our horse buggies for motorized vehicles in order to be more efficient.”

Another trend she has noted in her own country, where waste pickers were awarded the legal right to collect waste by the court, is a move by municipalities to hire a few as employees. “We do not want to be employees of the municipality; we want to continue to be entrepreneurs.”

To combat the possible negative consequences of formalization, Martha said, it is crucial to build strong organizations at the local, national and regional level. 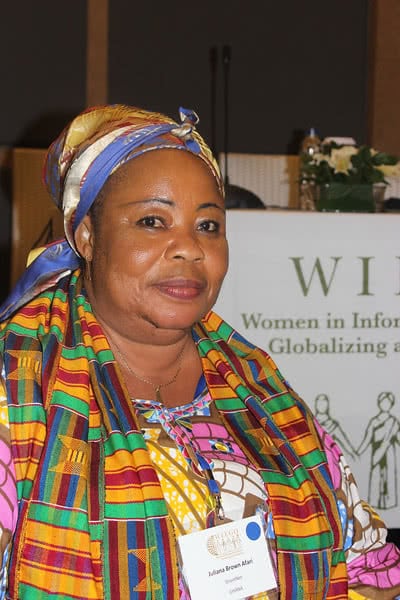 Juliana brought greetings from StreetNet, which she noted currently has 588,709 paid up members across 46 countries.

“Because of the lack of appropriate local, national and international regulation in this sector, street vendors are often perceived as being illegal while engaging in completely lawful economic activities,” she said.

Juliana provided a clear list of what street vendors want and need if they are to be formalized. These ranged from the freedom to sell goods and services in public places under fair and reasonable conditions and in places near customer traffic, to the freedom from harassment, confiscation of goods, evictions, arrests, bribes, mafia elements and exploitive intermediaries.

Other important considerations include the fair and transparent allocation of permits and licenses, provision of appropriate infrastructure, simplified taxation systems and simplified regulations for informal cross-border traders.

She noted that StreetNet and its affiliates are fighting for a vision of formalization that includes recognition in law of workers in the informal economy, the integration of indirect tax and other revenues already paid by informal workers into official tax systems, and access to social security for all.

“Most importantly, she stressed, “we want to participate directly in new forms of collective bargaining with local government authorities. That means proper negotiations—not merely consultation where we have no influence in the final outcome.”

Juliana closed with the rallying cry “Nothing for us without us!”

Poonsap began by sharing the challenges that the world’s millions of home-based workers face: low wages for often very long days, low education and skill levels, and susceptibility to economic downturns. She explained that the homes which double as workplaces often have poor lighting, poor ventilation, and are often located in slums. But most importantly, she noted, home-based workers are invisible to policymakers.

We dream a simple thing. We dream for a better income and better access  to government services.

She explained that in 1997, homeworkers won an ILO Convention that promised fundamental labour rights. “That was a long time ago. But change is very very very slow. What happened? Because we work at home, the government didn't hear our voice.”

Then she shared the experience of Thailand, where after a decade-long fight, a Homeworkers Act is providing access to occupational health and better pay for home-based workers, and ensures they have representation at the decision-making table nationally. Significantly, Thailand’s homeworkers now have social security to which the government contributes 30 per cent.

However, there are negative consequences to this formalization, she said. Although home- based workers have the right to organize and want to form legal entities such as cooperatives, the registration process is complex and the regulations are many. “There is concern that if we register, the government will control us.” Poonsap and her colleagues plan to go back to the government and fight to have the cooperative laws improved.

Poonsap concluded by saying that from a home-based worker perspective, the positive of formalization outweighs the negative.

“We dream a simple thing. We dream for a better income and better access to government services. To get this, we need to have decent work—not just employment, but decent work.” For home-based workers, she noted, that includes recognition of the fundamental labour right to social protection. “And it means we can negotiate with governments and employers.” 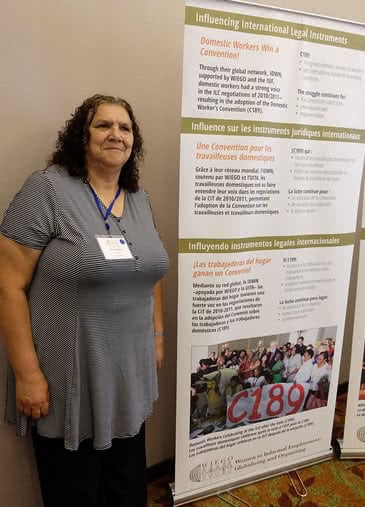 After leading the assembled workers in song—“My mother was a kitchen girl, my father was a garden boy, that is why I’m a Unionist”—Myrtle shared the story of the struggle for domestic workers’ rights in South Africa. “None of us had a voice. We had no labour laws. We had nothing. I could not even answer the master. But today we have labour laws. Today I can answer the master.”

But, she said, it was clear that this was not enough, because other domestic workers in other places did not enjoy any recognition. Somehow, they had to be brought together, to share that knowledge and talk.

She went on to recount the unease the informal worker delegation felt at the ILC in 2014. “They did not talk about us as if we were there…. All they wanted to talk about, the employers and the governments, was ‘Oh you informal workers, you must pay taxes – you are stealing from the state’,” she recounted. “They never recognized us as women, as men, as people there. It makes me angry and it makes me determined that next year, we will make our voices heard.” 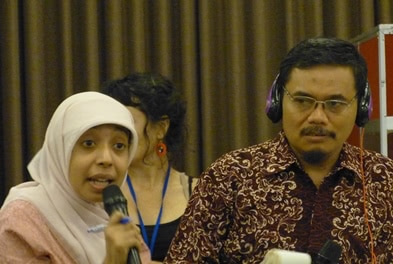 Discussion following the presentation allowed others to add their perspectives. Mrs. Nora Kartika Setyaningrum, an invited guest from the Labour Ministry of Indonesia, spoke of her newly-elected government’s push to formalize the informal economy and find appropriate, tripartite mechanisms that involve government, the private sector, and workers (including informal workers).

Carmen Vildoso, a municipal counsellor in Lima, Peru and a WIEGO Board member, spoke to the many challenges that local governments must address in regulating the transition. In Lima, for example, she noted that careful consideration is given to the areas of the city where it is safest for street vendors to work, after a devastating fire in an accessible and crowded area killed many. 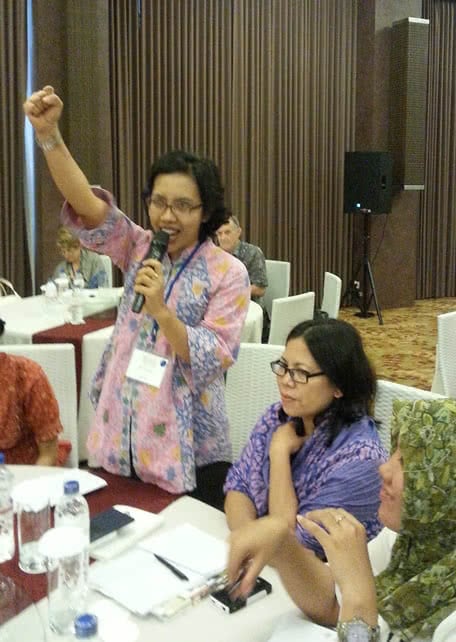 Several street vendor representatives from African countries expressed similar concerns that formalization will cost them more than it deliver if they do not fight determinedly for their rights. Representatives from the Self-Employed Women’s Association in India (SEWA) shared some of their successes in negotiating better conditions for informal workers, pointing out that organizing is key.

“Formalization is not just about regulation, it is about treating informal workers as human beings and allowing them their basic human rights,” said Rita Tambunan of Indonesia. She invoked the rallying call of the International Union of Food and Allied Workers: Organize, Fight and Win!

In her closing remarks, Marty Chen came back to that rallying cry and suggested modifying it to include building solidarity and alliances across organizations and sectors of informal workers: “I hope we will all leave this public event and the sixth General Assembly of WIEGO with a call to organize, build solidarity, fight─and win!”