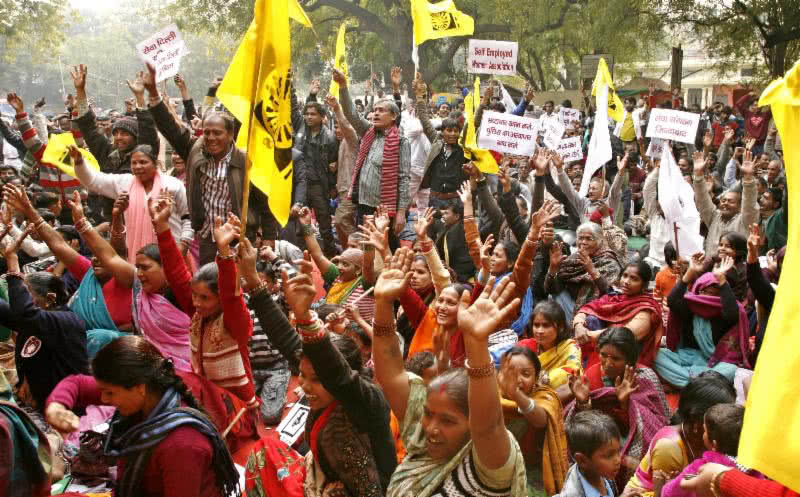 Workers in the informal economy, including own account workers, also engage in forms of collective bargaining through their membership-based organizations (MBOS). However, their counterparts across the table are often not employers. Street vendors most often negotiate with local authorities, for example, and with different municipal departments on issues such as with police regarding harassment and confiscation of goods. Waste pickers negotiate with local authorities for storage and sorting facilities or, more ambitiously, for the right to provide collection and recycling services for which they are paid. Many need to negotiate with buyers for better prices for recyclables.

Read WIEGO Working Paper #38:Collective Bargaining by Informal Workers in the Global South: Where and How It Takes Place (2018) by Françoise Carré, Pat Horn and Chris Bonner

Unlike workers in the formal economy whose rights are usually laid down in labour statutes, most informal workers do not have statutory collective bargaining rights. While the right has been acknowledged by the ILO (see Resolution and Conclusions Concerning Decent Work in the Informal Economy, ILC, 90th Session, 2002), including for own account workers, it has not generally been extended to these workers.

Most often, negotiations take place in ad hoc meetings – often arising out of a crisis – or in consultative forums without statutory obligation on the part of the authorities, and without enforceable agreements or continuity. While dialogues, consultations, or meetings to resolve immediate disputes play a role in enabling informal workers to raise their voices and make gains, agreements reached can be easily ignored or undermined.

However, as the case studies listed below outline, increasingly informal workers are finding a place at the table: with national and local governments – or, in the case of domestic workers, in forums involving employers.

Informal workers are also finding a voice in international negotiating forums, especially at the annual International Labour Conference of the ILO.

See Yes, We Did It! to learn how domestic workers secured an international Convention on decent work.

WIEGO and the AFL-CIO’s Solidarity Center in the USA collaborated on research that looked at collective bargaining in the informal economy. Debbie Budlender in South Africa led the project. A team of researchers analyzed five cases and produced case studies:

An overview report has been published as a WIEGO Organizing Brief: Informal Workers and Collective Bargaining: Five Case Studies by Debbie Budlender.