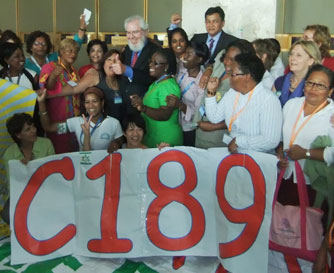 Domestic workers have made great strides in organizing globally in recent years. A growing movement led to the formation of the International Domestic Workers’ Network (IDWN) in 2009, which campaigned for an international instrument that would recognize domestic workers and their rights. In 2011,workers, employers and governments adopted the Convention (C189) and accompanying Recommendation (R201) on Decent Work for Domestic Workers at the International Labour Conference (ILC).

This triumph was the result of a coordinated effort by domestic worker organizations – regional, national and international – and their allies. Those allies included, especially, the IUF, WIEGO, ITUC and ILO-ACTRAV. (See The Campaign for a Domestic Workers' Convention).

The number of ratifications of C189 has been growing constantly after adoption. See which countries have ratified C189.

Domestic workers are isolated from other workers. Employers are individual households. The special nature of the worker-employer relationship in the employers’ home, and the fact that there are virtually no domestic worker employer associations, makes it difficult to negotiate collective bargaining agreements with their employers.

In some countries, domestic workers are not allowed to join trade unions, such as in Malaysia,  Thailand, and the USA (Human Rights Watch, ITUC, IDWN 2013).  Even where they are, established unions generally have not prioritized organizing domestic workers because they are invisible and most are women in “low status” jobs. They lack collective power and are difficult to organize using traditional approaches.

One exception is in Uruguay, where the SUD negotiates in a Tri-partite Wage Council with government and with the Housewives League, acting as the employer party. The first Collective Agreement was signed in 2008. Read Collective Bargaining and Domestic Workers in Uruguay | en español.

Building leadership skills is crucial to the sustainability of domestic workers’ organizations at all levels. A current WIEGO project, supporting the IDWF, focuses on Advancing Domestic Workers' Leadership.

Increasingly, domestic workers are organizing themselves. In some countries, in particular in Latin America, they have  long organized. However, their unions have struggled to achieve scale, to have an impact, and to survive. The recent global movement toward adoption and then ratification of C189 has provided impetus at the local level for organizing.

Some trade unions of domestic workers have only domestic workers among their members. The Jamaican Household Workers Union and the South African Domestic, Service, and Allied Workers’ Union (SADSAWU) are examples.

Newer forms of organizations include co-operatives such as the UNITY Housecleaners Cooperative in New York, USA.

Some associations operate like unions but are not legally registered as unions. One example is SUMAPI (meaning ‘join’), an Association of domestic workers in the Philippines (Bonner 2010).

In Latin America, there is a long-established regional organization, Confederación Latinoamericana y del Caribe de Trabajadoras del Hogar (CONLACTRAHO or the Latin American and Caribbean Confederation of Household Workers) founded in 1988 with member organizations in 13 countries and allies in Canada and Europe.

In the USA, the National Domestic Workers Alliance was founded in 2007.

In Hong Kong, unions formed by migrant domestic workers according to their nationalities have formed the Federation of Asian Domestic Workers Unions in Hong Kong (FADWU).

The Africa Domestic Workers Network (AfDWN) was launched in Cape Town, South Africa on 16 June 2013. Domestic workers representatives from 17 organizations, representing a total membership of 95,572 workers across 17 African countries, came together to endorse the new network.

Mobilizing around the campaign for a Convention proved to be a powerful tool not only for forging alliances but also for organizing locally – all under the leadership of domestic workers themselves. This energy will carry domestic workers forward as they continue organizing to advocate for ratification of the Convention and its implementation in their own countries.