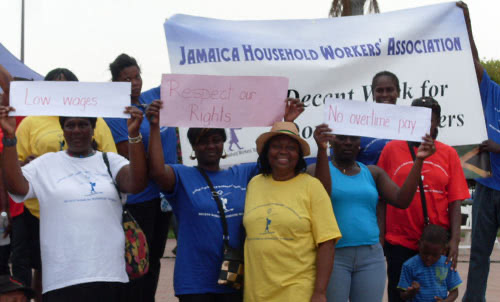 Under the first Women’s Economic Empowerment project (2009-12), WIEGO supported the formation of the International Domestic Workers Network (IDWN). The IDWN led an international campaign for the recognition of domestic workers -- and won the historic adoption of Convention 189 and its accompanying Recommendation on Decent Work for Domestic Workers at the International Labour Conference (ILC) in 2011.Learn more about this victory and WIEGO's role in it.

C189 is an exciting beginning that provides strong guidance for how laws and policies should protect domestic workers. But a substantial gap exists between the Convention’s stipulations and the realities in most countries. This project sought to instill leadership skills and organizational strength in domestic workers' organizations across 15 countries.

In 2013, the IDWN held a Founding Congress, supported by this project, and became the International Domestic Workers' Federation (IDWF).

The project was managed and supported jointly by the IDWF team of regional and international coordinators and WIEGO’s major partner and sub-grantee in the project, the International Union of Food, Agricultural, Hotel, Restaurant, Catering, Tobacco and Allied Workers’ Associations (IUF), which worked closely with WIEGO in the creation of the IDWN (now the IDWF).