The Campaign for a Domestic Workers' Convention

History was made on June 16, 2011 when governments, employers and workers from around the world adopted the Convention (C189) and accompanying Recommendation on Decent Work for Domestic Workers at the International Labour Conference (ILC).

This was a leap forward for an estimated 50–100 million people worldwide who work in the homes of their employers. The Convention recognizes the “significant contribution of domestic workers to the global economy”. Support was overwhelming, with more than 83 per cent of votes cast in favour of adoption.

The momentous event was the result of years-long, coordinated effort by domestic worker organizations – regional, national and international – and their allies.

Read: "Yes, We Did It!", Celia Mathers' account of how the Convention was achieved.

Domestic workers are now continuing their organizing efforts at the national level to advocate for ratification of the Convention and its implementation in each country.

This International Domestic Workers' Network (IDWN) video describes the campaign and features footage from the ILCs of 2010 and 2011.

A Brief History of the Campaign 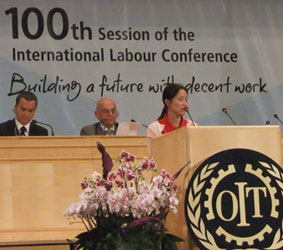 For decades, domestic workers and their allies, especially trade unions, had called for an international instrument that would recognize these workers and their rights. In November 2006, the FNV (the Federation of Dutch Labour) and the NGO IRENE, together with an international steering group consisting of WIEGO, among others, co-organized an international conference, “Respect and Rights. Protection for Domestic/Household Workers” in Amsterdam. Participants recommended that a working group explore the formation of an international network. In 2007, the global union federation IUF began to play a lead role in establishing a network to promote domestic workers’ rights and to lead a campaign for an ILO Convention on domestic work. The International Domestic Workers Network (IDWN) was subsequently established through a collaborative partnership between IUF and WIEGO. See more on the International Domestic Workers’ Network.

In March 2008, the Governing Body of the International Labour Organization (ILO) began a standard-setting discussion on “Decent Work for Domestic Workers” at the 2010 International Labour Conference (ILC). The IDWN mounted a campaign, in consultation and collaboration with the ILO and International Trade Union Confederation (ITUC). Regional workshops were held in Africa, Asia, and Latin America where the concerns and demands of domestic workers were collected (see the IDWN Platform of Demands).

The historic first discussion on “Decent Work for Domestic Workers” took place at the International Labour Conference in Geneva, Switzerland in June 2010. The IDWN was represented at the Conference by members of its Steering Committee and other domestic workers, some of whom were on the official national trade union delegations from their respective countries. In addition, a number of allies were there to provide technical support to the IDWN delegation. Karin Pape, the Interim International Coordination of IDWN and WIEGO Regional Advisor for Europe, coordinated the work of the delegation, together with Barbro Budin, the Gender and Equality Officer of the IUF and a member of the WIEGO Board.

Participation in the ILC process provided the opportunity for domestic workers to speak for themselves, and to have their voices heard loud and clear.

The most important outcome of ILC 2010 was the decision by the tri-partite Committee on Domestic Workers on the form of the instrument, which was taken by a vote. It was agreed that this should be a Convention supplemented by a Recommendation – the proposal made by the Workers’  delegates. The vast majority of the Committee members rejected the amendment by the Employers’ Group that the instrument should only take the form of a Recommendation.

Throughout the second half of 2010 and first half of 2011, the IDWN waged a campaign to ensure success, internationally, in different countries and across regions. They mobilized and organized domestic workers; worked with the trade union movement; lobbied governments and employers; and built alliances with NGOs, researchers and supportive groups to help ensure victory. Researchers prepared statistical and other research that provided data and background for the domestic workers.

Again in 2011, a strong delegation of domestic worker representatives participated at ILC. Some were in their official country trade union delegations or in the International Trade Union Confederation delegation, while others were there as IDWN under the auspices of the IUF or WIEGO. They had the support of researchers and NGOs. WIEGO provided political, logistical, media and translation support.

IDWN representatives arrived in Geneva on May 30 for the 100th ILC, which opened on June 1. By June 7, the tri-partite Committee on Domestic Work had reached an agreement on the draft text of a proposed Convention for Domestic Workers, and on June 9 agreed the draft text of the accompanying Resolution. The drafting committee then took over to finalize the texts.

On June 14, members of IDWN joined the Swiss national trade union and gender rights advocates in a public demonstration and march in honour of the struggle to attain labour rights and political representation for Swiss women. Domestic workers used the march to highlight their demands for an ILO Convention. A tapestry with 3,000 domestic workers’ handprints travelled from Hong Kong to Geneva for this event.

On June 15, the executive body of the International Labour Conference formally accepted the Report of the Committee on Domestic Workers. Myrtle Witbooi, President of IDWN, delivered an address to the entire ILC in the United Nations Assembly Hall.

For detail on the process leading up to the vote on the convention in 2011, see Towards a Domestic Work Convention: ILO Process and Timetable.

Following adoption of the Convention, Juan Somavia, Director-General of the ILO, said, “We are moving the standards system of the ILO into the informal economy for the first time, and this is a breakthrough of great significance. History is being made."

This victory is just the beginning of the work for domestic workers’ rights. Convention 189 places a duty on governments to ensure domestic workers enjoy fundamental rights and effective protection against all forms of abuse, harassment and violence, but nations must ratify it, and incorporate it in the laws of the country. Domestic workers continue their organizing efforts at the national level to advocate for this ratification, national laws and implementation of the laws.

In 2013, the IDWN transformed itself and the International Domestic Workers' Federation (IDWF) was born.