Delhi Diary highlights reflections, insights and notes from the field from the Focal City Delhi (FCD) team in their ongoing work with informal workers. We capture these on a regular basis in order to provide a dynamic picture of the ways in which informal workers in Delhi are consistently struggling, resisting and innovating against great odds. The views expressed here represent those of the FCD team.

Maternity Benefits: Seek to Bring Together, Not Divide

The Maternity Benefit (Amendment) Act, 2017 seeks to give women enough maternal benefit (paid leave for 26 weeks) for competent child care, making India one of the more progressive countries in this aspect. However, this law covers only formal sector workers. The overwhelming majority of informal women workers – 97% of the total women workers in India – remain outside the ambit of this
law.

Maternity benefits and child care services are an important part of social protection systems. They allow workers to earn an income when their children are young and give them time to care for infants at home. This is particularly important for women, who are more responsible for child care and domestic work than men.

While there haven’t always been enough provisions for maternal care in the informal economy, the government has provided periodic schemes that attempt to cover this deficit. From the Janani Suraksha Yojana to the Indira Gandhi Matritva Sahyog Yojana (IGSMY), the government has worked with cash transfers to provide maternity benefits to the unorganised sector.

The Government has also attempted to bring some security to the informal sector by providing these benefits under the mandate of a formal law. To this end, two laws have attempted to cover this. One is the Unorganised Workers Social Security Act (2008), which mandates the central government to formulate health and maternity benefit schemes for women workers in the unorganised sector. The second is the National Food Security Act (2013) which subsumed the IGSMY scheme under it, with regards to maternity benefits.

However, as with most laws pertaining to the informal (unorganised) sector, implementation has been a problem. The government currently provides an entitlement of INR 6,000 to pregnant women working in the unorganised sector in only 53 districts across the country.

We have to work towards securing maternal rights and a better future for the women who need it the most. There needs to be progress towards including informal economy workers under the ambit of this law.

One way is to work towards including informal women workers in every policy initiative made for working women in the country. To this end, the new Labour code on social security is worth a look. Unfortunately, the code, through its language, excludes women in the informal sector by relying on the traditional employer-employee relationship to define eligibility. For instance, it leaves out the household as a workplace and hence the entire workforce of domestic workers. Also, there is lack of clarity in pinning down the responsibilities of the employer, especially for own account and home workers.

There is a need to recognize maternity benefits as a universal right that is applicable regardless of duration, consistency and status of employment. It is time to finally bring informal women workers into the fold and give them the same rights afforded to other working women in the country.

Street Vendors Movement in India: The Need to Build Capacity—Now 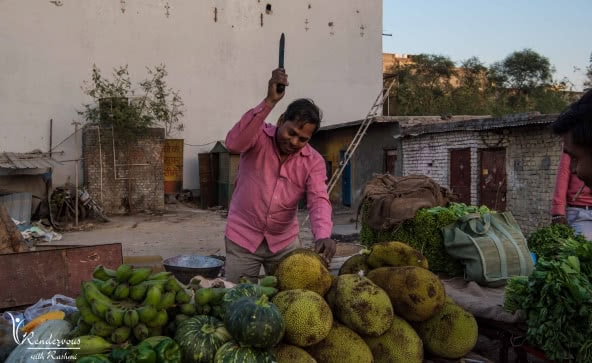 As a young girl in a small town in the Himalayas, I used all my weekly pocket money to eat a snack I loved – bun chole. It was messy eating, in a public place, and as an adolescent, I disliked it. But I went back, week after week, because no one sold it anywhere except the street vendor outside my school. He was not the only vendor there – there was the ubiquitous churna wala with mouth freshener and various other indigenous appetizers; and also, others who sold many unique sweets. This was a ‘natural’ market, where street vendors congregated because of the high footfall of consumers.

Street vendors are an integral part of the informal economy in India. Street vendors in India are estimated to account for 14 per cent of all informal urban employment, and 4 per cent of the urban workforce across India. Some estimates suggest that around 2 per cent of the urban population of a city is engaged in this occupation. The life of street vendors is plagued by harassment and the constant threat of eviction. They constantly face assault and exploitation by the police and municipal functionaries and are denigrated as the bane of city
life by the urban elite. They are accused of depriving pedestrians of their rightful space, causing traffic jams and having links with anti-social activities, while their right to livelihood remains largely unrecognized.

In the face of this, The Street Vendors (Protection of Livelihood and Regulation of Street Vending) Act 2014 regulating street vending and hawking, is a landmark legislation in India. Perhaps the first of its kind globally, it accords unprecedented power to the cause of street vendors. The law prioritizes inclusive urban planning processes with a focus on giving a voice to street vending associations and is aimed to make the street vendors participation in urban planning (via Town Vending Committees) an institutional feature of local governance.

The Act is a key achievement of the vendors' movement in India.

The passing of a law for the protection of the street vendors’ livelihoods is by no means the end of the road. Implementation remains a challenge. Unfortunately, the enabling policy environment has thrown up new challenges – those of capacity building and supporting the Town Vending Committees (TVCs).

The elected vendor members of the TVCs are entering a new era of citizen participation where they are directly interacting with city bureaucrats, urban planners and city administration in the TVCs. In order for them to effectively participate in this arena, and fight for the rights of the vendors, they need to be equipped with information and knowledge about their roles and responsibilities, as well as be open and responsive to the contextual needs of the vendor communities that they may be
representing.

Representation of street vendors in TVCs is a unique opportunity, achieved after many years of struggle. It should not be lost due to the vendors’ inability to defend their rights – pitched as they are against formidable adversaries in the cities of India. 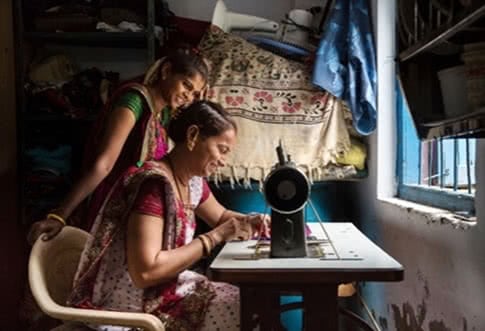 Home-based work is an important source of employment in India, especially for women, and yet, a majority of home-based workers are neither seen nor heard.

Speaking on the radio program ‘Kal ki Subah Humari Hai’, Sabina ben, a home-based embroidery worker in Delhi, stated how her lack of voice impacts the transience and value of her work. With no bargaining power, and dependent on whatever work she can get, she is unable to negotiate for more work, or better pay. As she explained, “If I don’t take what I get, the sub-contractor will just give it to someone else.”

While documenting home-based work in Sunder Nagari slum in Delhi, we found women doing everything from embroidery and embellishment to repairing shoes, stitching garments and weaving textiles. They did all this, hidden away in by-lanes, isolated and invisible- unacknowledged for the work they do.

We also found that home-based work provides a key source of employment, primarily for women. By bringing work into their communities, these women are a source of economic resilience in their neighbourhoods. Despite this, they remain largely isolated and unrecognized as workers in the city.

See part 1 and part 2 of a photo essay on home-based work in Sunder Nagari.

Women home-based workers, in particular, are widely assumed to be doing subsistence production or earning ‘supplementary incomes’ (i.e., supplemental to their husband’s or other male earner’s income) even if they are the sole breadwinner in the family. Even as co-breadwinners, their earnings are often crucial to the survival of the family, a fact that is rarely recognized.

Giving Voice to the Voiceless: How a Radio Programme Empowered Women Informal Workers 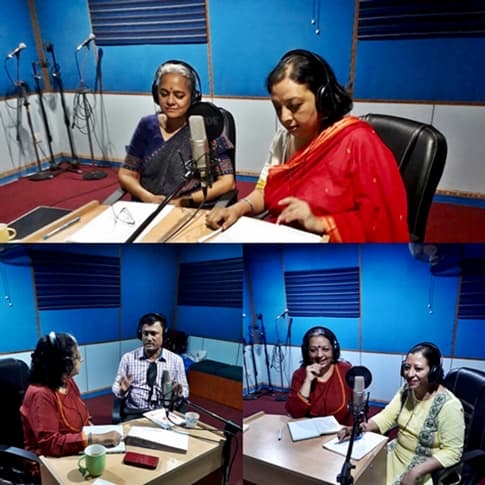 The radio programme "Tomorrow is Ours" was conceived as part of a larger effort to bring visibility to informal workers and highlight their contributions to the city of Delhi. It also became a tool of empowerment to build capacity and strengthen the voice of women workers.

There are many misconceptions about informal workers, the biggest being that they are not real ‘workers’, eligible to be covered by labour standards and social protection. Additionally, their activities are not seen as legitimate economic pursuits requiring supportive policies and services. Rather, there is a common mindset that stigmatizes the informal economy and those who work in it. As a result, these workers  face an unfavourable and – in many instances punitive – policy and regulatory environment.

In order to change mindsets and to highlight the role and contribution of the informal economy in the city, WIEGO Focal City Delhi (FCD) hosted a radio programme on All India Radio (AIR FM Rainbow) called ‘Kal ki Subah Humari Hai’(Tomorrow is Ours).

A unique platform to talk about change

Every week over three months in 2017, informal workers such as home-based workers, waste pickers, street vendors and domestic workers – many of them women – shared their dreams and the challenges they faced in the city. The radio programme offered a platform for workers to use their own voices and present their issues. The workers, together with experts and movement builders, discussed misconceptions about the informal economy and presented new and innovative ideas and suggestions for change.

The goal of the radio programme was to bring greater visibility to the lives and struggles of urban informal workers in Delhi – something rarely addressed in the mainstream media. It also outlined ways to not only improve their situation but work towards recognizing them as legitimate citizens and economic contributors with certain rights and entitlements.

Listen to the full radio programme (in Hindi).

A second life as an educational tool

Though the radio program was aimed at changing mindsets, in an unforeseen development, it was subsequently used by a WIEGO partner organization, SEWA, for member education and leadership training. 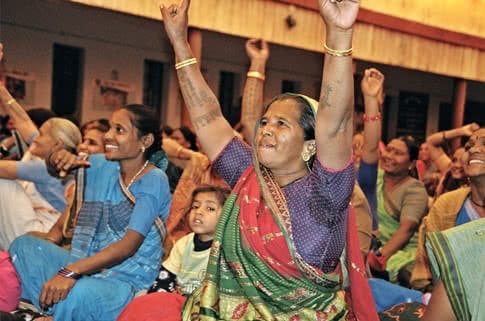 SEWA is a trade union of poor, self-employed women workers. As building capacity is central to their philosophy, member education and basic leadership training is the cornerstone of its work. The organization uses innovative methods to help illiterate and barely literate women manage their own activities and be autonomous and self-reliant, both economically and in terms of their decision-making abilities.

In recent efforts, SEWA Delhi used clippings of the radio programme in a short video for its member education program. The goal was to build capacity, increase awareness and motivate SEWA members to negotiate for their rights. The video and the radio programme also served to help members understand avenues of support available to them, and begin to work towards finding answers for the challenges they face.

This is SEWA's video (in Hindi):