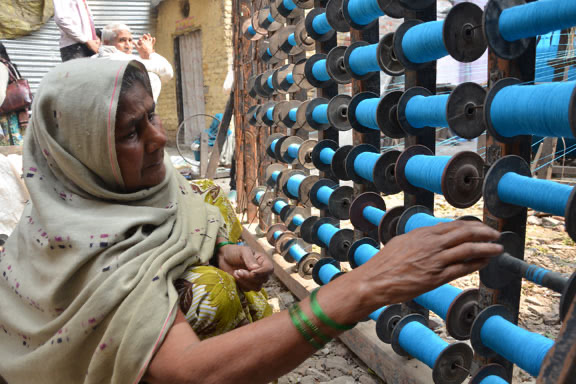 This is the second of a two-part essay on women home-based workers in Sunder Nagari slum in Delhi. Read part one here.

When we visited Sunder Nagari, a slum in Delhi, in the middle of the day, it was a buzz of activity. Nearly every tiny home was a site of economic production, with many women and men working to produce a variety of goods – from embroidered and/or embellished garments and jewellery, to repairing shoes to stitching garments, weaving textiles and even manufacturing small mechanized parts.

Curiously, nearly all the home-based workers close to the main road were men. It wasn’t until we went deeper inside the narrow bylanes that we found more and more women working from the confines of their small and cramped homes. Their varied work for remuneration was much more hidden than it was for men, which has many repercussions for their ability to be recognized as valid contributors and workers, connect more directly with markets, improve their skills and working conditions, and negotiate for a better payment system to avoid delayed transactions.

While their products may be sold by local street vendors or in retail malls, home-based producers remain isolated in their work with very little visibility and voice. Isolation is not the only challenge; women are often not even recognized as workers. When we spoke to family members of the women home-based workers, they often called the women’s livelihoods “wives’ work,” part-time work, or a hobby; occasionally, they did not even acknowledge it as work at all. The women, in contrast, spoke about the long hours of work (along with their other care responsibilities), and shared candidly how they used their income for better education for their children, a daughter’s marriage, a family health crisis, or special treats for the family during festival time.

Men are seen as the breadwinners and their work is associated with the family’s income and stability. This difference can be seen in the location and up-gradation of the men’s workspaces compared to women’s, even when both worked from their own home. In Sunder Nagari, men had separate rooms/spaces for stitching and weaving, with cupboards for storage and better lighting and space. Women mainly worked within the confines of their small and cramped homes, or just outside, recycling living spaces into work areas several times a day. They almost always worked alone, only occasionally being joined by a neighbour doing similar work.

Men also used tools that were bigger and better and relatively more modern: looms, electric sewing machines, and large thread weavers, whereas women worked on traditional rustic spinning wheels, used needles for hand embroidery, and their bare hands for shoe repair and bindi-making. It looked like men had large orders and could store raw material and produce in bulk. Women often worked from small trays of raw material and without any kind of protective gear.

The women home-based workers also told us how their isolated work contributed to their inability to deal with changing markets and exploitative middleman. Shamma was doing embellishments for the export market – jewellery and clothing – but over time found it more difficult to find work because her skillset did not match the changing fashion trends and there was no opportunity to upgrade her skills. Today, she embellishes glass bangles and acknowledges that her finished bangles are sold at much higher costs, but also laments her lack of bargaining power and inability to seek more and better work.

In response to these needs of the women home-based workers in Sunder Nagari, SEWA opened an Embroidery Centre. Situated close to members’ homes, the centre seeks to bring women home-based workers into direct contact with markets – national and global – eliminating middlemen and contractors and thus giving them and their work visibility and recognition. The centre builds the skills of home-based workers to give them more regular, and better paying, work orders, and also seeks to build a transparent and fair payment system and production process. The Embroidery Centre also has several other services, including microfinance, health programmes, information dissemination, and supplementary education classes for workers and their families.

At the core of this initiative is a strong worker representation in leadership and an organization which is responsive to its members’ needs and challenges, which in turn translates into a stronger collective voice for invisible women home-based workers. Improvement in the economic status of these women is already evident, showing that empowerment of women through work does not happen with a single-scoped intervention. The SEWA Embroidery Centre exemplifies a holistic approach to addressing the varied needs of working women in Sunder Nagari – an important approach that is more likely to bring sustainable change to their lives.

All photos provided by Sofia Trevino.