Photo Essay Part I: Home as a Place of Work | WIEGO Skip to main content

Photo Essay Part I: Home as a Place of Work 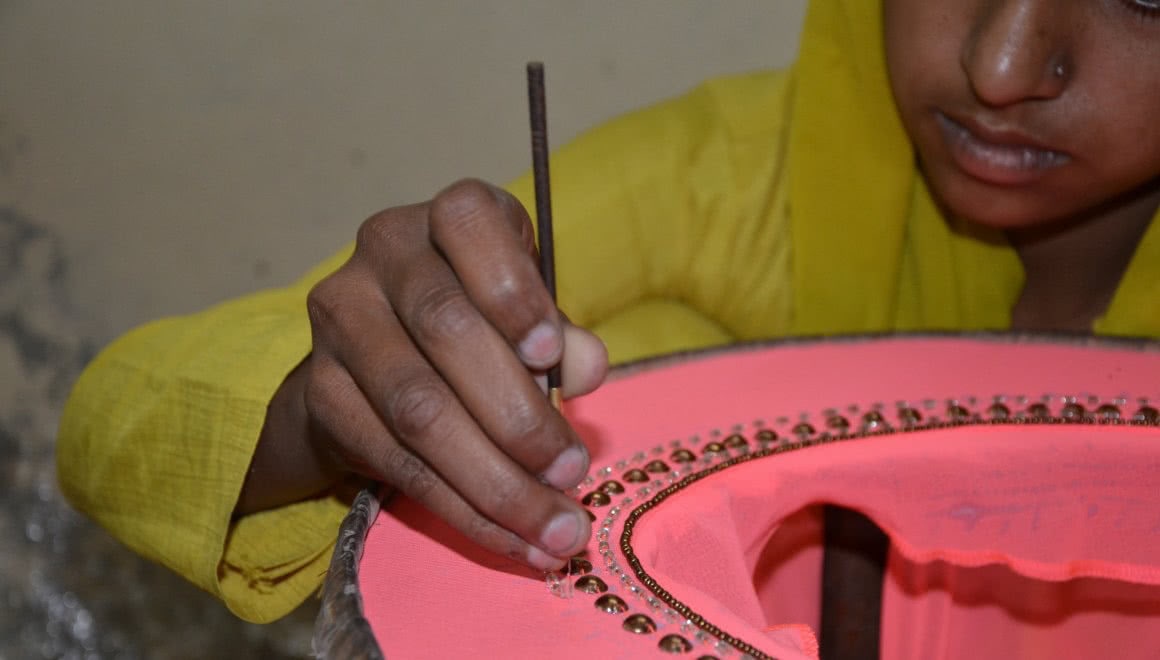 This is the first of a two-part essay on women home-based workers in Sunder Nagari slum in Delhi. Read part two here.

In the narrow bylanes of Delhi’s Sunder Nagari slum, Shama and Phoolbano conduct their livelihood activities outside their tiny homes. Sunder Nagari is one of the largest resettlement colonies in Delhi and has all the challenges of informal settlements across India: small, dark dwellings, cramped spaces with little ventilation, irregular electricity, and poor drainage and sanitation. We visited Sunder Nagari in February 2015 for a field visit with our partner organization, SEWA.

It was midday when we arrived in the slum, and in every other house we peeped into, a woman sat working – making bangles, doing embroidery, running the spinning wheel, repairing shoes, and making toys. The daily chores of cooking and cleaning were done, and the women home-based workers had already transformed their small living spaces into production units.

Homes and neighbourhoods as places of work is a reality for a large number of women workers in urban India. Home-based workers represent 32 per cent of all women urban workers in India; and constitute 40% of the women’s urban informal employment.

The situation of home-based workers differs from that of many other poor informal workers in cities because their home is their workplace, and they often live and work throughout the day and night in slum environments, as opposed to those who work outside and come home primarily at night. For this reason, slum-related health and environmental problems pose particular hazards for home-based workers, both of which have implications for their livelihoods and incomes.

Sunita showed us how the drain outside her room almost always overflows into her room during the rainy season. The drainage poses not just serious health hazards but also increases her cleaning and care responsibilities, making it impossible to work or store goods. Poonam continued to do fine embroidery in a dimly lit room to save the cost of electricity. Roshni sat among her cooking utensils and a sleeping child, diligently finishing her work. And Shama pointed out how the narrow bylanes and small, single-room houses did not allow her to store and transport finished goods or raw material. All women workers we met talked about the time spent in collecting water, managing waste, fighting dust and insects, and managing with very small spaces that doubled up as living and working spaces. 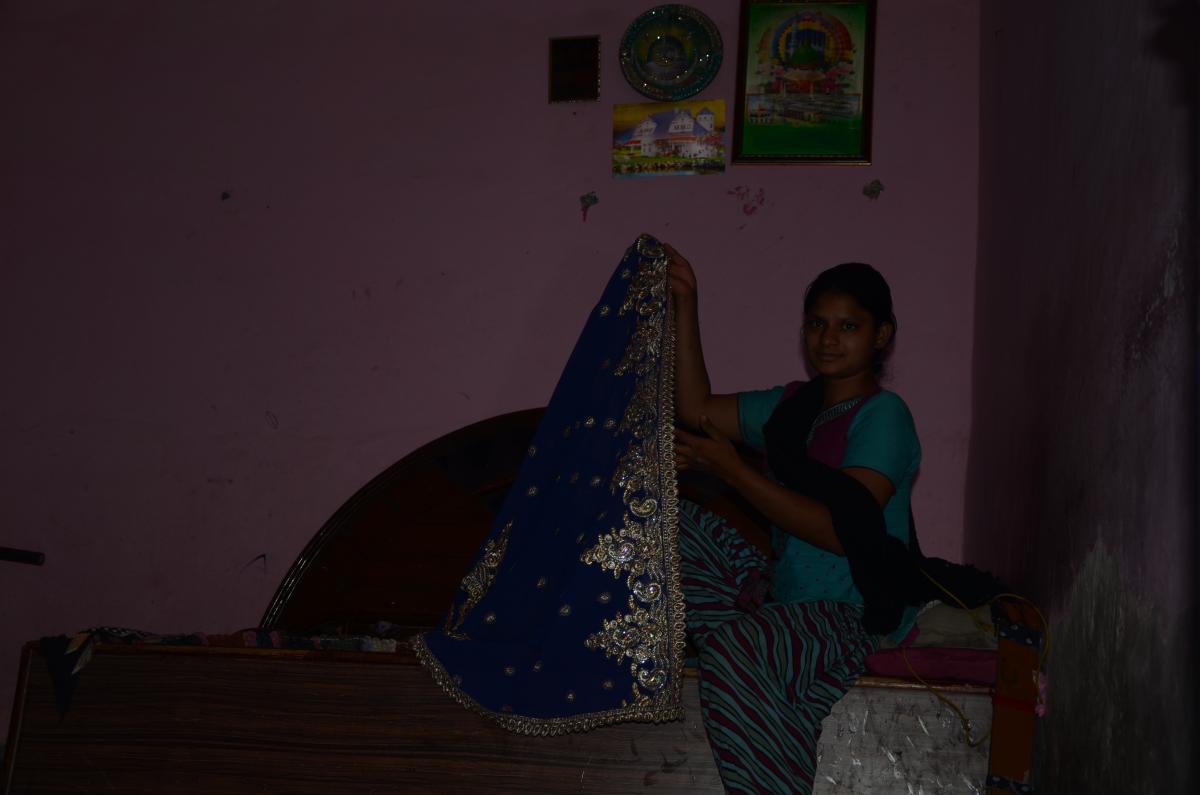 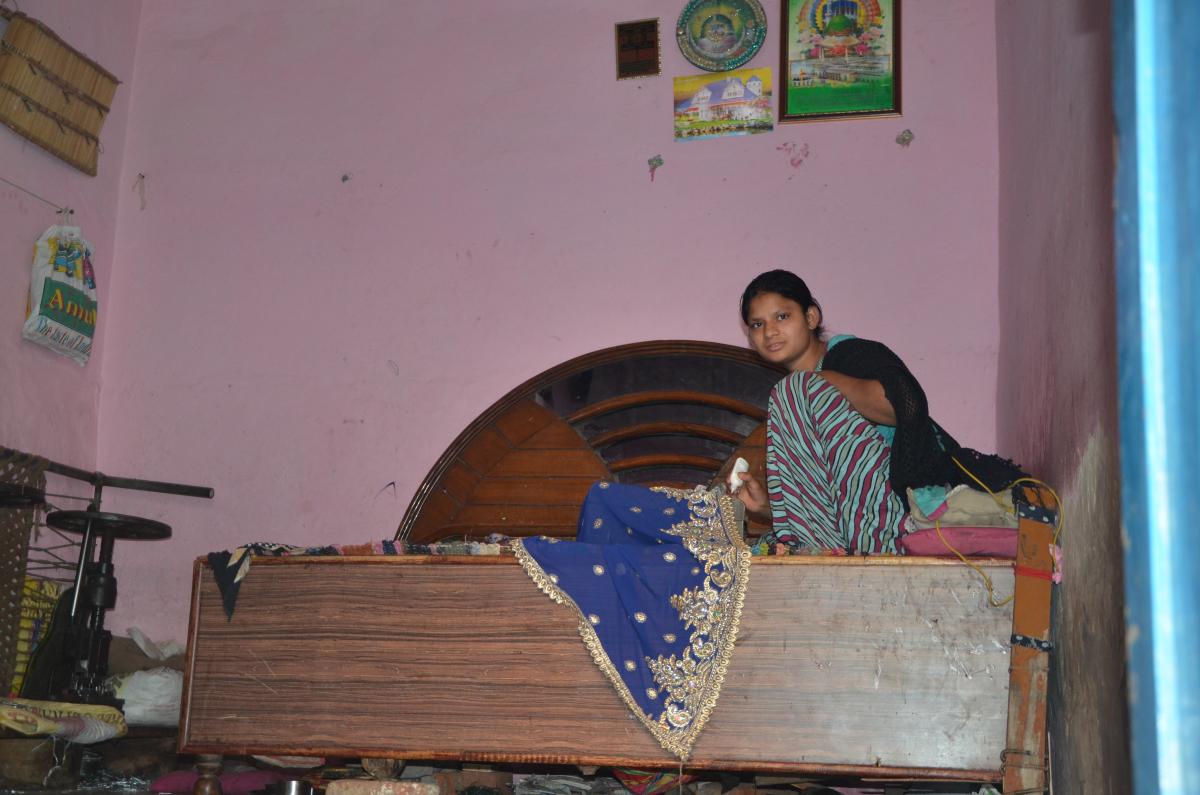 Electricity and lighting issues cause severe eye strain for home-based workers in Sundernagari. The photo on the left shows the reality of the situation. The right shows the same workspace with the camera’s flash.

Most of them sat on a hard floor, bent from the waist in a crouched position, working for long hours. Deteriorating eyesight and aching backs and knee joints were common problems. The bangle workers had sore thumbs and hands, as the glass of the bangle often pierced their skin. The shoemaker complained about the glue and other chemicals.

We asked many women, why did they do this hard work for such long hours? The answers were almost always the same – to add to the family income. Most husbands worked as informal workers – as rickshaw drivers, street vendors, or even as construction workers – and had insecure livelihoods and low income. Irregular work and incomes were supplemented by women’s home-based work in all instances; a few used their earnings to generate a small fund for themselves in their old age. Dulari, an older woman, said she assembled small toy parts sitting on the verandah of her house because it gave her some financial independence. She did not have to depend on her sons for medicine or to treat her grandchildren to some sweets.

What was very evident was the fact that the cost of poor infrastructure – expensive electricity, time spent in managing waste or collecting water, repeated mopping and cleaning, folding and refolding sleeping spaces and cooking areas to create workspaces, and the inability to buy raw material at bulk prices due to lack of storage spaces – was eating into their meagre incomes. The lack of adequate housing and urban services threatens not only their living environment but also their livelihoods.

To improve the situation, more dialogues are needed between home-based worker groups and policymakers and planners to develop a clearer understanding of how to integrate these hidden workers into city planning, policies, and practices. During a recent conference in Delhi, at UNHabitat’s Urban Thinkers Campus, WIEGO hosted a panel entitled, “Informal Livelihoods and Inclusive Planning," where fellow panelists emphasized the need for greater recognition of the valuable role informal workers play in cities and how much they contribute on a household, local, and national level.

This recognition is an essential first step in integrating informal workers. It is one we have been working on through the Global Home-based Workers Conference WIEGO hosted in Delhi in February 2015 and the historic Delhi Declaration, in which home-based workers call for their rights and recognition as workers. The Declaration urges policymakers to see home-based workers, count them, and bring them into the debate. Once they are seen and recognized, there is a greater likelihood that their needs as economic agents based at home will be factored into the cities of the future, and the new urban agenda will truly be an inclusive one.

All photos provided by Sofia Trevino