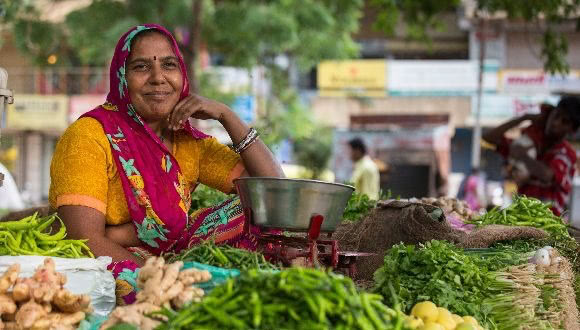 Bhubaneshwar, India, provides a unique model for integrating street vendors into cities’ future plans. Through a highly collaborative and inclusive design and development process, Bhubaneshwar became among India’s first cities to designate official vending zones and build fixed kiosks for vendors in targeted areas. A phased process allowed for testing and experimentation, ensuring the end result worked for all. This week, we take a look at this collaborative process and the four key components that can guide other cities. (The following piece is excerpted from the WIEGO Publication Series: The Regularization of Street Vending in Bhubaneshwar, India: A Policy Model by Randhir Kumar.)

Before 2007, street vending in Bhubaneshwar, the capital city of Odisha (a state in India), exemplified an over-regulated informal economy. Police and municipal inspectors would persistently harass the vendors by threatening them and confiscating their merchandise. The authorities treated street vendors as illegal entities, encroachers on public space, and a source of unsightly nuisance.

The authorities treated street vendors as illegal entities, encroachers on public space, and a source of unsightly nuisance.

In Bhubaneshwar, the basic issue of devising a policy framework for street vending remained unaddressed for a long time. However, the need for a feasible policy was felt by both the town authorities and vendors alike. Both the parties realized that their tug of war benefited no one, and coming up with an enduring solution would require peaceful negotiations through social dialogue.

After multiple rounds of participatory discussions between the vendors’ organization and town authorities, a conceptual model involving dedicated vending zones was collectively agreed to in December 2006. Under this model, legally sanctioned, aesthetically pleasing fixed kiosks were to be constructed in the vending zones and handed over to the vendors working in the area.

The key ideas behind designing the policy framework were to bring all the relevant stakeholders together for joint planning and then to implement it through collaborative partnership among them.

Between 2007 and 2009, 52 vending zones were created; as of December 2011, there were 54 vending zones with approximately 2,600 kiosks (Mohapatra 2011). The key ideas behind designing the policy framework were to bring all the relevant stakeholders together for joint planning and then to implement it through collaborative partnership among them.

Bhubaneshwar thus became among the first cities in India to acknowledge street vendors as an integral part of the city and to manage and support them through a complex public, private, and community partnership model.

The action plan devised was to be implemented in roughly three phases.

The first phase required town authorities and vendors’ associations to map the vendors’ spatial distribution throughout the city and propose the potential sites for creating the vending zones. It also involved a photo survey of the beneficiaries who would occupy the kiosks in the zones.

Once this exercise of identification of land plots and vendors was complete, the second phase involved putting the site in consideration under a probation period of six months. During this probation period, only the construction of temporary bamboo structures was allowed.

Once the probation period was over, and both the authorities and vendors’ organizations were convinced of its smooth functioning, the third and final phase required issuing vending licenses. The construction of iron structures having an aesthetic appearance was permitted. In this third phase, private partners were brought in primarily to finance the construction of the vending zones.

Learn more about how cities can benefit from working with street vendors. 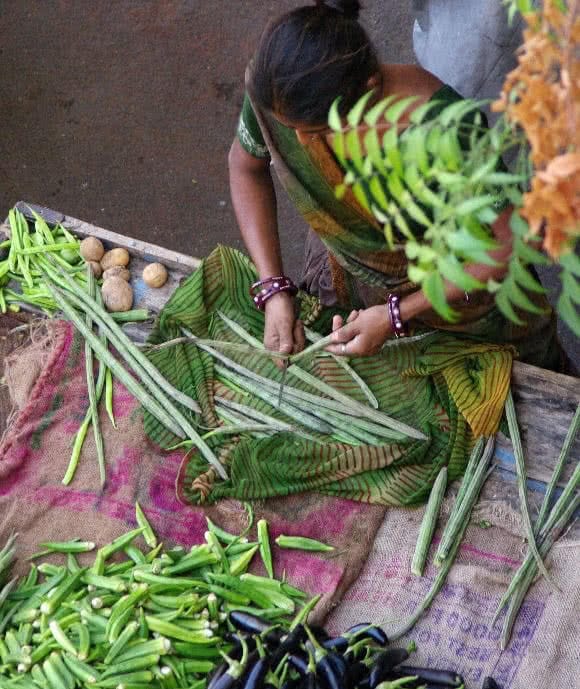 A woman vendor prepares her produce for sale on the streets of a city in India. Photo: WIEGO

One might argue that, due to the planned nature of Bhubaneshwar, there was scope for establishing dedicated vending zones, but it might not be feasible to replicate this in other space-constrained cities of India. However, there were several factors beyond the narrow consideration of urban space that led to the successful creation of vending zones.

#1 Political Will: The acknowledgement of vending as a legitimate profession and the political will among authorities to genuinely address the concerns of vendors played a critical role in the successful design and implementation of the model. The innovative stance adopted by the town authorities was a willingness to partner with vendor organizations to understand their reality and specific needs. The impetus for creating vending zones was further enhanced by the positive image they created for Bhubaneshwar in the media and on other political fronts soon after the first few vending zones were established.

#2 Leadership: The second, and perhaps most critical, element for the success of the model was the able leadership from the vendors’ side. Before the intervention of the National Association of Street Vendors in India (NASVI), the vendors’ association in Bhubaneshwar had several fragmented streetwise associations. NASVI motivated the unions to join together under one federation.

Bhubaneshwar thus became among the first cities in India to acknowledge street vendors as an integral part of the city and to manage and support them through a complex public, private, and community partnership model.

#3 Social Dialogue: Another important element of the success of the Bhubaneshwar model was the participative nature of consensus building and allowing multiple voices in debates. During the city management group meetings, the officials (e.g. municipal, traffic, and police) and vendors would voice their concerns and then each concern would be individually discussed in a way that allowed some positive concrete consensus to be reached.

#4 Partnership: Regulating and supporting interactions between numerous local officials and literally thousands of vendors is a process with enormous potential for misunderstandings, avoidance, and deception (Bromley 2000). This potential hindrance was substantially overcome through partnering with the vendors’ organization. This not only helped the Bhubaneshwar Municipal Corporation gain wholehearted support from city vendors, but also minimized the chances of potential deceit in terms of kiosk allocation. Furthermore, the partnership model overcame the “mutual sense of distrust” between authorities and vendors. The involvement of private partners was also crucial in the final implementation of the vending zones as it partly solved the problem of financing the construction.

A Model for Global Cities

All cities can learn from the success of the Bhubaneshwar model. To achieve a positive outcome equivalent to that in Bhubaneshwar requires strong vendor unity and a will among town authorities to address the issues pertaining to street vending. This can begin to address urban poverty by creating a more conducive environment in which street vendors can trade and earn a reasonable living.