New Podcast Unpacks How Informal Workers are Fighting for Healthcare, Child Care and Safety at Work 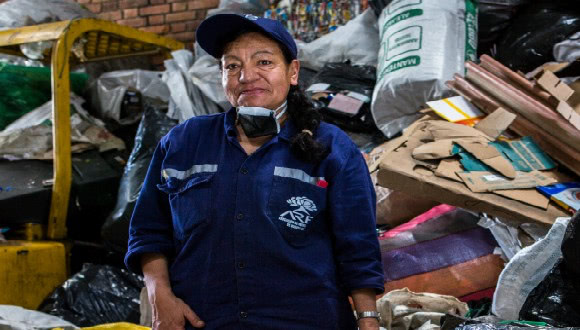 Globally, 2-billion people work in the informal economy. They are some of the most vulnerable workers in the world, and they are the new majority. This means that 61% of workers globally rely on work that offers little pay and few protections, and women are particularly at risk.

Public policies and social protection schemes often do not consider these workers, leaving them vulnerable to income losses and struggling to cope after an event or shock.

In this new podcast, Informal Economy: Social Protection, Cyrus Afshar hosts WIEGO social-protection experts, as well as external guests, in wide-ranging discussions on some of the most-pressing issues related to social protection from the perspective of informal workers. These include debates around the future of work, demographic changes and the informal economy, as well as social services, like child care and health that can protect informal workers’ incomes.

Check out these first five episodes to deep dive on topics ranging from the need for municipalities and national governments to better collaborate on systems that work; the unique occupational health and safety challenges faced by informal workers, particularly waste pickers; the need for child care; violence faced by domestic workers at their workplaces; and how co-production of social services are filling immediate gaps in public systems.

The series starts with a primer on social protection for informal workers with WIEGO’s senior advisor in the Social Protection Programme, Francie Lund.

Francie Lund discusses how WIEGO’s Social Protection Programme got started nearly 20 years ago after hearing how members of India’s pioneering Self-Employed Women’s Association (SEWA) had prioritized access to health insurance as one of their most fundamental needs. They said their income-earning potential was being impacted by lack of affordable, quality health and child care services.

She says that the “obscene difference” in levels of wealth today only further exacerbates the need to make healthcare and other social protections more universal to protect informal workers’ incomes.

In the interview, Francie also discusses WIEGO’s efforts to get informal work recognized as real work by improving statistics. She highlights progress with the International Labour Organization as essential in increasing the visibility and recognition of informal work.

Looking back, Francie says that what has shifted is a better understand of what social protection for informal workers means. She also takes us through important model programs in Brazil, Thailand and Zambia. She closes by looking ahead at what to watch: the global social floor and making sure informal workers’ needs are included by powerful actors, such as International Labour Organization and United Nations agencies.

She cites an example from Latin America where cash transfers have helped more people access social services, such as health care and education, but explains that outcomes have not improved because of the inadequate quality of these municipal-level services.

She also emphasizes the particular disadvantages faced by women informal workers, and calls for solutions that see the intersections. “There’s not just one solution. It’s not just social protection. It’s social protect ‘and’,” she says.

In this episode, Sonia Dias, WIEGO’s Waste Specialist, and Ana Carolina, WIEGO’s Research Associate, discuss the health and safety risks faced by waste pickers on the job and how to create more awareness of these risks among waste pickers.

Occupational health and safety is a key issue for workers everywhere. Health and safety measures at work play an important role on workers quality of life, and their capacity to have a steady and sustainable livelihood. For informal workers, this is even more crucial, especially since they are often left out of regulations that assure them a safe work environment.

Sonia Dias and Ana Carolina discuss how they launched an initiative to explore these questions and issues with waste pickers in Brazil. The initiative, called the Cuidar Project, was a two-year research-action project that mapped health risks faced by waste pickers. It has as its goal to share health knowledge and enhance waste pickers’ connections to local partners in the health arena to hopefully lead to interventions to diminish health risks.

Listen to the full episode to learn more about the health risks faced by waste pickers and the Cuidar Project.

In this episode, Rachel Moussié, Deputy Director of WIEGO’s Social Protection Programme, explores the challenges of child care and how essential it is to women informal workers.

Rachel Moussié takes us through a hotly debated topic globally – the need for better access to child care for working women. She takes us through the particular needs of informal workers and shows how the provision of child care has a close relation to social protection and women’s economic empowerment.

Informal women workers' low earnings mean they work long hours to bring income security to their families, often leaving little time for them to care for their own children.

As Rachel explains, without the provision of quality child care services, women either take on more flexible but insecure informal work, work fewer hours in these jobs than they need or want, or are less productive because they have to look after their children while trying to work.

The lack of quality child-care options contributes to gender inequalities in labour force participation rates and earnings and to high levels of poverty among women informal workers. She says that informal workers are often in the “missing middle”: they are without state support or employer support, since many informal workers, such as home-based workers or street vendors, are self-employed. Domestic workers, as she highlights, spend long hours caring for other people’s children.

Rachel calls for high quality, publicly financed child-care provision to secure women’s incomes. State-sponsored child care centers could even provide new work opportunities for women and help them transition to formal work. In the absence of these programs, she shows promising examples from membership-based organizations, who are leading the charge for this important provision – from SEWA in India to waste picker cooperatives in Brazil.

Listen to the full episode to learn more about WIEGO’s global campaign around child care.

Episode #5: Domestic Violence and Violence at the Workplace

In this episode, Adriana Paz, the Latin American regional coordinator of the International Domestic Workers Federation, discusses the very real struggles against violence in the workplace faced by domestic workers globally. Adriana is originally from Bolivia and has worked as community organizer, women’s rights and migrant rights for community based and non-profit organizations in Bolivia, Mexico and Canada.

Workers across the world are affected by violence and harassment at the workplace, especially women. It is such a pervasive phenomenon that it was included in the agenda of the next International Labour Conference, which took place in June 2019 in Geneva, Switzerland, where an historic, new Convention was adopted on Ending Violence and Harassment in the World of Work.

In this interview, Adriana Paz helps us understand the implications of this issue for domestic workers and the role of social protection in addressing this problem.

She says the issue is so pervasive that it’s a “daily reality” for every 8 out of 10 domestic workers in Latin America. She says there are many dynamics at play, including the intersection of gender, race and economic status – not to mention the increased danger and vulnerability that comes with working in such isolation and behind closed doors.

Adriana highlights how being part of a union would help to protect them, but only 1.5 percent of domestic workers belong to one.

She also discusses how domestic workers lack protection on global and national levels and how the “fight for legal recognition is a fight to reclaim dignity.”

Listen to Adriana Paz discuss this important issue and read about the important, new ILO Convention on violence in the workplace.

In this episode, Laura Alfers, WIEGO’s Social Protection Programme Director, takes on the important topic of who should bear the main burden of social service: is it the state, the private sector, NGOs, communities or individuals? This is a very complex discussion central to questions of rising inequality.

In this interview, Laura Alfers explains the concept of “co-production” of services, providing examples of how informal workers’ organizations have become involved in health-service provision – something that is often termed “co-production.” She tells us about two case studies, one from India and another one from Thailand, to explain how grassroots organizations have taken important roles in the provision of social services.

She also takes on the question of whether co-production releases the state of being the public service provider. She acknowledges that this could be a dangerous shifting of the responsibility of the state onto poor communities, but says it is not always the case, and, in fact, could be quite progressive.

Laura ends by stating the ultimate dream and goal: quality, public health for informal workers. “It’s the dream, and we need to keep striving for it,” she says. “But we also need to work with reality, and the real situation people are dealing with on the ground.”

Listen to the full episode on co-production of services with Laura Alfers, and download her paper, “Overcoming Inequalities in a Fractured World: Between Elite Power and Social Mobilization”, presented at the UNRISD Conference in Geneva in November 2018.

Subscribe to the “Informal Economy Podcast: Social Protection” to learn more about WIEGO’s cutting-edge research and hear from informal workers organizations about the debates, policies, successes and challenges they face in accessing and reforming social protection systems.

Feature photo: Esperanza Foretu is a recylcer and waste picker in Bogota and member of the ARB (Asociacion de Recicladores de Bogota) Waste Picker's Association of Bogota. She is seen here at a warehouse operated by ARB in Bogota. Credit: Juan Arredondo/Getty Images Reportage