Thousands of reclaimers are at work in South Africa. These workers are responsible for the country's high rates of recycling. Yet they continue to struggle for recognition and to end harassment. Through the WISA project, they have organized and made remarkable gains -- but ensuring progress is sustainable is still a challenge.

COVID-19 Update: Reclaimers in South Africa had been organizing and negotiating with governments to be officially integrated into solid waste management systems. But in the COVID-19 lockdown, their essential services were not being recognized, Melanie Samson writes in The Maverick. Meanwhile, aid was been hard to come by, while harassment increased.

The concerted advocacy of reclaimers' organizations--including the South African Waste Pickers' Association and the African Reclaimers Organisation (ARO) in Johannesburg--began to change that. Reclaimers demanded they be deemed essential services during the lockdown and as soon as they could, became a driving force in delivering food packages and other support to their colleagues. In Johannesburg, ARO has stepped up its service provision to neighbourhoods after corporate contractors and municipal services were interrupted by the pandemic.

Informal waste pickers play an integral role in South Africa’s waste industry. For generations, these men and women—known locally as reclaimers, waste pickers or bagerezi—have earned income from collecting, sorting and selling recyclable discards. They remove tonnes of waste from city streets and keep it out of municipal landfills.

Their work is key to South Africa’s impressive overall recycling rate of 57 per cent. Recently the Pretoria-based Council for Scientific and Industrial Research estimated that reclaimers recycle as much as 90 per cent of South Africa's plastic and packaging, and save the public coffers 750 million Rand -- all without government support or compensation for their service.

Yet these workers remain vulnerable and poorly compensated actors in a highly profitable industry.

The South African government has estimated that as many as 90,000 people rely on waste picking to earn a living. These informal workers provide a valuable service to municipalities and must be recognized and compensated for this work.

Between 2016-20, the project operated in Johannesburg, Tshwane and Sasolburg municipalities. The three cities were chosen based on WIEGO’s research into the organizing potential of waste pickers and the size of the waste economy.

Vanessa Pillay, Programme Officer with WIEGO’s Organization & Representation Programme, was part of the WISA team. “Without structured forums for negotiation, the city has developed projects and programmes that endanger waste pickers’ livelihoods. City officials claim that they cannot consult them because they are not organised,” Pillay wrote in “Amplifying voice, visibility and validity: Waste pickers in Joburg city” in the South African Labour Bulletin. 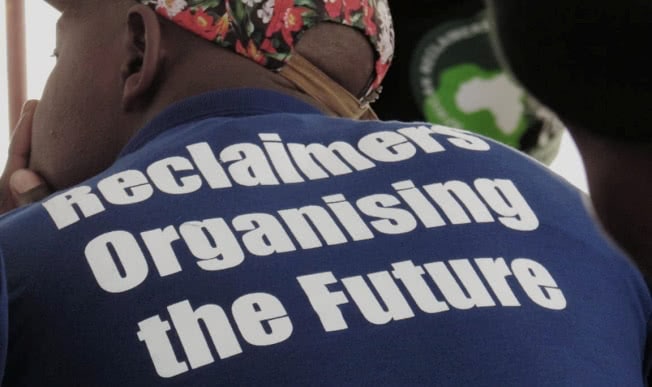 In 2017,  livelihoods were threatened by new private recycling contracts in Johannesburg. Waste pickers came together, making their demands public through media and public demonstrations. They scored a victory: Joburg’s Reclaimers Win Important First Victory in Fight Against Privatization.

In May 2019, Johannesburg’s informal reclaimers marched in a large-scale protest, organized by the Association of African Reclaimers (ARO), against the city’s refusal to recognize them, answer their demands and offer fair treatment and compensation. While these informal reclaimers are responsible for diverting massive amounts of recyclables out of the city’s waste stream, their livelihoods are threatened by privatization and a lack of engagement from the city. Read the letter ARO sent to a municipal authority.

Despite the valuable service reclaimers provide, they are stigmatized on the street and at home. Thomson Reuters Foundation interviewed more than 10 reclaimers across Johannesburg: Living off trash: South Africa's waste pickers reclaim the streets

The city began discussions with the Interim Joburg Reclaimers Committee to develop a framework for the integration of waste pickers. Waste pickers have made their demands clear: These include:

South Africa’s Department of Environmental Affairs’ is developing national guidelines for municipalities and industry on the integration of waste pickers. One goal is to improve working conditions. Three representatives from the WISA project have been chosen by the Interim Johannesburg Reclaimers Committee to represent their interests on the working group, giving waste pickers a voice in the national policymaking process.