The sign at the entrance to the Vaal Park Recycling Centre in South Africa bears 23 logos, each representing a public or private partner that has come on board to help make this initiative a success. And at the heart of this centre is a team of determined workers—all formerly waste pickers on the Sasolburg waste dump—who are turning a green idea into a sustainable enterprise. 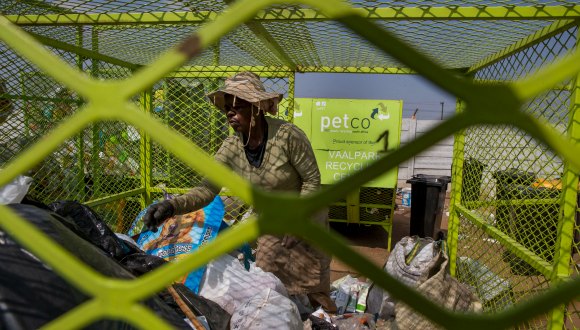 The Ikageng Ditamatieng Cooperative, a registered association formed by waste pickers on that dump, runs the new Recycling Centre, which opened in November 2014. The cooperative works with all levels of government—the municipality, the Free State Department of Economic Development, Tourism and Environmental Affairs (DETEA), and the national Department of Environmental Affairs.  A wide range of industry partners are also involved, including the Packaging Council of South Africa (PACSA) and PET Recycling Company (PETCO), among many others.

Simon Mbata (pictured at top), one of the workers and a long-time leader with the South African Waste Pickers Association (SAWPA), was instrumental in bringing the Recycling Centre to fruition. He explained that Vaal Park, located in Free State about an hour’s drive south of Johannesburg, was chosen as the first community slated to begin a segregation-at-source waste programme. Initially, 3,000 households were invited to pick up two wheelie bins: one for paper, cardboard, glass, metal, and all plastics, the other for non-recyclable waste. Every Wednesday, garbage trucks take the waste to the landfill. On Thursday, the Recycling Centre’s truck makes the rounds, collecting the recyclables and bringing them to the Centre for sorting.

But many people don’t use the bins and don’t wait for Thursday pick-up. Instead, they drive their materials to the Centre.

The Centre accepts everything—even what it can’t recycle. That’s good community relations, Simon says, and a good long-term strategy. He points to a stack of tyres and then to a heap of Tetrapak containers. “We don’t have a market for these things, but we keep them and wait for a market.”

He’s less optimistic that there will ever be a market for the spent fluorescent lighting tubes propped safely behind the office—but he knows if people are sent away with their materials, they might never return.

Community buy-in, Simon notes, is crucial, so the team has made a great effort to rehabilitate the site, which was previously an informal dumping ground. Eight months after the centre opened, the site is orderly, with materials neatly segregated, some into bins provided by partners like the Institute of Waste Management of Southern Africa, and others neatly corralled. There is plenty of room for vehicles to maneuver and a bit of landscaping dotting the grounds.

In addition to being the chief negotiator for the centre, Simon says his official role is to act as gardener and groundskeeper. When he finds garden plants that have been thrown away, he nurses them back to health and places them near the small office by the entrance. Other castoffs have been reclaimed to decorate a rest area for the workers.

The recycling project is currently being expanded, with hundreds more household bins being distributed in surrounding communities. This is backed by an awareness campaign so people understand the environmental and community benefit of recycling. To this end, the Centre has secured a weekly 30-minute spot on the community radio. Awareness events are also held in public areas (such as parking lots), where the workers hand out brochures and explain the value of their work. 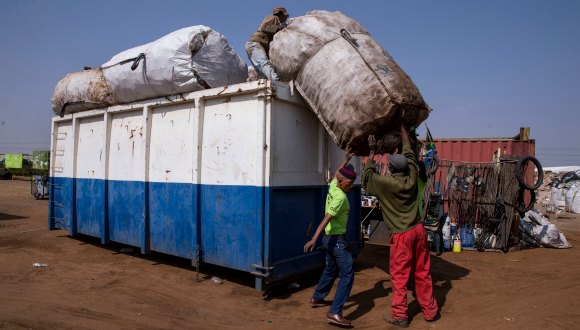 The 13 cooperative members at the Vaal Park Recycling Centre team all earn the same monthly wage. While it is less than they could make waste picking at the landfill, they believe they are building a better future. Photo: Jonathan Torgovnik/Getty Images Reportage.

The business objective is to attract a higher volume of material to the Recycling Centre. Currently, it sells to the same middleman who buys from the waste pickers on the dump. The middleman sets the price and takes a healthy profit when he sells to big industrial players. Simon says the Recycling Centre hopes eventually to cut out the middleman by meeting the minimum monthly volume requirements of those industrial buyers.

To this end, the Centre also engages the waste pickers who work the streets, filling carts with recyclables. “We pay them the same price that we get for selling,” Simon says, noting this, too, is a long-term strategy.

The centre’s operation will improve in the next few weeks. An electric baling machine was recently donated to help compress and package recyclables for resale.  It’s under wraps right now—but the power company has promised to hook up the electricity on the site next week.

The Vaal Park Recycling Centre is a testament to how determined waste pickers can bring the community together, create more secure livelihoods, and improve the environment. But it hasn’t come without struggle and sacrifice. Despite the years spent negotiating and strategizing—neither of which bring immediate earnings—the 13 workers at the Centre currently earn less than they could working on the dumpsite.

Simon began his waste picking career in 1998, and quickly realized that there was money and potential in waste. “When I was working [at a former job], I couldn’t afford a car. When I started waste picking, I could—and I could afford to send my wife to secretarial school,” says the father of two school-aged daughters.

He notes that many waste pickers on the landfill can make 300 rand every day. However, the Recycling Centre’s payout hasn’t reached anywhere near that level. Last month [July 2015], individual earnings for each worker (they are all paid the same amount) rose to 2,300 rand. And in fact, in prior months, some of the original 21 workers have gone back to the dumpsite because of economic hardship.

“We make less here, but we are building something,” says Gladys Mofokeng, one of six women who work here. She fulfills a secretarial role, for which she received some training from partner PETCO.  The Centre’s financial committee has also received guidance on good financial practices. But in general, Simon says of building the business, “We did it organically.”

He hopes that organic progress will continue—quite literally. Simon has his eye on the grounds adjacent to the recycling centre, a mostly empty field where the municipality accepts yard and garden waste. There, he wants to explore what can be done with organic or “wet” waste, such as creating commercial compost and generating biogas. He saw these kinds of projects while attending the Waste Pickers Global Strategy Workshop in Pune, India in 2012 and thinks they have potential here.