“I, Too, am Delhi”: People’s Campaign Calls for Inclusion in Indian Capital’s Master Plan | WIEGO Skip to main content

“I, Too, am Delhi”: People’s Campaign Calls for Inclusion in Indian Capital’s Master Plan

India’s capital city is preparing its roadmap for the future – a new master planning document that sets out the vision for Delhi for two decades, until 2041. The major planning exercise not only maps what the city will look like but also, in theory, takes stock of the current reality.

This reality, like in many cities across the Global South, is that the majority of people are earning a living as best they can – vending on the streets, cleaning people’s homes or driving rickshaws. This vast informal workforce – upwards of 85% in Delhi and 90% in India – often lives in self-built housing, which is typically inadequate and poorly serviced.

Despite this reality, India’s Master Plan is ploughing ahead with visions of skyscrapers and high-end housing – essentially ignoring the vast majority of the city.

To address this history of exclusionary planning in Delhi, Focal Cities Delhi (FCD) – alongside a diverse coalition of allies representing informal workers’ rights, housing rights, environmental defenders and others – has launched Main Bhi Dilli (“I, too, am Delhi”) Campaign, which calls for the master plan to adequately address the issues of livelihood and habitat for the urban poor.

Follow updates from Focal Cities Delhi through the Delhi Diary. 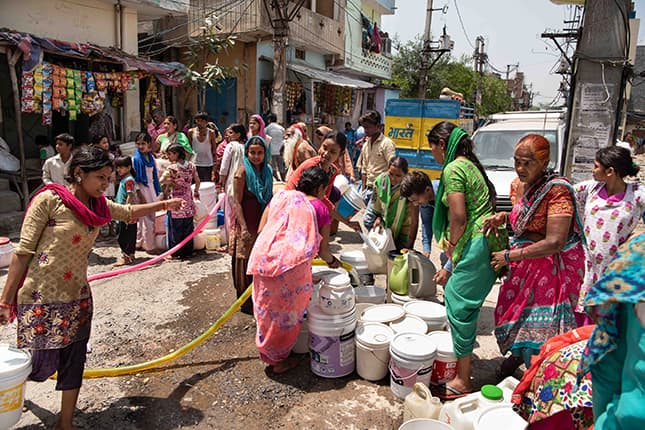 Photo: Women in Delhi collect water and continue to struggle to receive basic services -- a struggle they hope to change with greater visibility in the Master Plan. Credit: Rashmi Choudhary

Planning documents all too often only paint a picture of cities filled with office-going professionals, living in formal housing. City-level plans are often used as tools of exclusion, further marginalizing the poor and the vulnerable. Many planners aspire to build high-technology-oriented, world-class cities, without acknowledging the ground realities, where most people are unable to meet their basic needs and are structurally denied the opportunity to partake in an equal and just urban future.

The campaign hopes to intervene in the formal planning process to envision a more equitable, just and sustainable city.

The campaign hopes to intervene in the formal planning process to envision a more equitable, just and sustainable city. It is doing this by building awareness of Delhi as a city where most people are informally employed. It is also initiating widespread public discussions on what the workers of Delhi need and demand for the future.

Read about why the Master Plan matters to informal workers – in their voices.

Why Focus on the Master Plan?

The key focus of the campaign is on the Master Plan, since it is the key macro-level spatial document that lays down the guidelines for future development in the city, determines how much land will be available for different socio-economic purposes and creates a framework for the infrastructure that will support this growth.

Simply put, the Master Plan decides where in the city particular activities happen and how much area and supporting elements are required. It lays out a vision about how the city should expand and what it should look like  in the future.

This important document will have a major impact on how work and life happen in the city. The vision set out by the Master Plan is quoted in various other government documents and fundamentally guides other policies and programmes planned by different levels of the central, state and local governments.

The Master Plan decides where in the city particular activities happen and how much area and supporting elements are required. It lays out a vision about how the city should expand and what it should look like  in the future.

A statutory document that is legally enforceable, the Plan has the force to declare all “violations” to it as illegal and thereby render them insecure. The judiciary in India has often been the champion of the Plan and has often intervened to mandate the government to implement it.

Unfortunately, up until now, this intervening has manifested largely in brutal evictions of people from self-built housing in what are classified by the plan as “unauthorized colonies” or “slums” and of street vendors from areas declared “no-vending zones.” These mandates also penalize work at home, as the housing areas are zoned residential, and in the shutting down of small commercial establishments operating in such neighbourhoods.

Major agenda points proposed for inclusion in the Master Plan by the Campaign:

1. Housing as a Productive Resource

This Master Plan is particularly important for the informal workforce, as their concentration in “informal settlements” and involvement in work that happens in spaces outside of what are formally termed as “workplaces” makes them particularly vulnerable to exclusion under the plan. However, progress made with this plan for inclusion could have positive ripple effects: formal space allocations in the Master Plan can go a long way in facilitating implementation of other policies that acknowledge their work and can lead to better integration.

One of the key principles of the campaign is for the Master Plan to re-orient its view of housing as merely for shelter to that of being a productive resource that is often also used as a workplace.

For instance, one of the key principles of the campaign is for the Master Plan to re-orient its view of housing as merely for shelter to that of being a productive resource that is often also used as a workplace. This is true not only for home-based workers who engage in remunerative employment from within their homes, but is also true for waste pickers, who do much of the sorting and segregation work in and around their homes, and for street vendors, who use their homes for preparation and storage of goods.

Recognizing homes to be workplaces would necessitate maintaining flexibility in use norms, enhancing size and density norms for low-income housing and envisioning supportive infrastructure and services.

2: Inclusive Use of Public Space

Another major focus of the Campaign is public space. Since a lot of informal work happens in what are termed as “public spaces” in the plan, workers in these spaces, such as vendors, can be deemed as encroachers, occupying the space meant for pedestrians or for parking.This situation is so despite the Street Vendors (Protection of Livelihood and Regulation of Street Vending) Act of 2014, which recognizes the rights of vendors to their places of work and mandates that adequate space be allocated to them.

The campaign is demanding that the next plan provide for enough space for all vendors.

The present Master Plan of Delhi notes this mandate, but does not provide concrete norms. The campaign is demanding that the next plan provide for enough space for all vendors. The space needs should be determined through surveys conducted by the elected Town Vending Committees, which should be based on mapping of natural markets so vendors are not evicted.

Several other norms relating to street and pavement design, heritage markets, neighbourhood-level women’s markets and vending spaces in new transit corridors have been developed through consultations with street vendor groups.

Waste management is another key issue facing Delhi. The Solid Waste Management Rules of 2016 call for decentralization of the system and integration of waste pickers. A huge part of waste collection from households and segregation for recyclingis done by informal waste pickers in Delhi.

Currently, waste pickers in the city have to sort their recyclables in their push carts, on street corners or in open dumps, which are now increasingly being closed. Space allocation for sorting and segregation at the neighbourhood level can ensure the management of wet waste in a decentralized manner so that maximum materials are recovered for recycling. This would not only help waste pickers’ livelihoods but also contribute toward better and sustainable practices in waste management.

A City for All Has Benefits for All

Intervening in the plan through the lens of livelihood could be a game-changer for Delhi’s future. Including the excluded will make the city more liveable for everyone.

Asserting vendors’ access to public space not only positively impacts the livelihood of the street vendor but has a direct correlation to public safety. More eyes on the streets makes it safer for all but especially for women. Giving waste pickers space for their work will make the city cleaner for everyone. Pushing the transport plan to favour pedestrians and public transport users makes mobility easier for all.

Focal Cities Delhi hopes that the integration of livelihood, housing and gender into the planning discourse will help envision a more equitable future for all citizens of Delhi.

The Delhi Master Plan is often looked to as a path-setter for city development plans all over India. The efforts towards making the planning process more participatory and inclusive of different voices is likely to have a rippling effect - bringing to life many innovative models and practices that can be carried over to other cities as well.

But most importantly, Focal Cities Delhi hopes that the integration of livelihood, housing and gender into the planning discourse will help envision a more equitable future for all citizens of Delhi, especially the most vulnerable and marginalized.

Follow Focal Cities Delhi and updates on the Main Bhi Dilli (“I, too, am Delhi”) Campaign here and sign up for the WIEGO newsletter.

Feature photo: Members of the Main Bhi Dilli ("I, too, am Delhi") Campaign strategize how to intervene and raise key issues. Credit: Mahila Housing Trust Delhi.