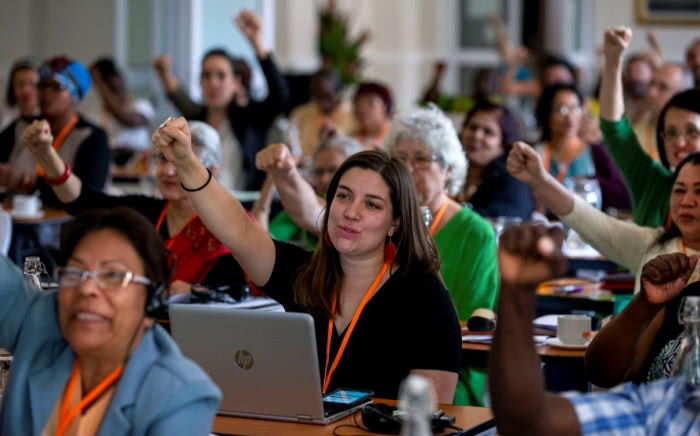 Held in Johannesburg, South Africa from Nov. 12-14, the event gathered leaders, activists, researchers and policymakers in the informal economy to celebrate past achievements and chart the course ahead.

Every four years, WIEGO's General Assembly convenes our individual and institutional members. These global experts on the informal economy - including researchers, statisticians, and informal worker leaders representing over 25 associations, cooperatives and unions - shared knowledge and generated new ideas. Because this is a key pillar of WIEGO’s governance structure, the membership also reviewed WIEGO’s progress, plans, and budget; approved candidates for the new Board; and endorsed the election of representatives to a Nominations Committee. And they suggested ways that we could better support their efforts on the ground with new research and focused action.

WIEGO Senior Advisor Marty Chen, who led WIEGO for its first two decades, gave the keynote address. In this audio excerpt, Marty talks about the progress made by informal workers in creating a more just world over the past 20 years, about the significant challenges that remain, and about her optimism for the future.

During her speech, Marty also recognized the incredible achievements of international, regional, national and local organizations of informal workers around the globe in securing livelihoods and improving conditions for workers. Read the full speech.

On November 14, the WIEGO Network held a Public Dialogue on Forging a Path towards Recognition and Inclusion of Informal Workers to discuss the implementation of Recommendation 204 on the Transition from the Informal to the Formal Economy, adopted at the International Labour Conferences in June 2015.

Watch a live feed of the event on Facebook.