Sonia Dias, WIEGO’s Waste Picking Sector Specialist, talked about the Rethinking Gender in Waste Recycling project that has been piloted with women waste pickers in Brazil.

Madalena Duarte of MNCR, the National Movement of Brazilian Waste Pickers, spoke about the positive impacts of the Rethinking Gender in Waste Recycling project.

After summarizing key points that emerged from the presentations, Melanie opened the floor for questions and contributions. 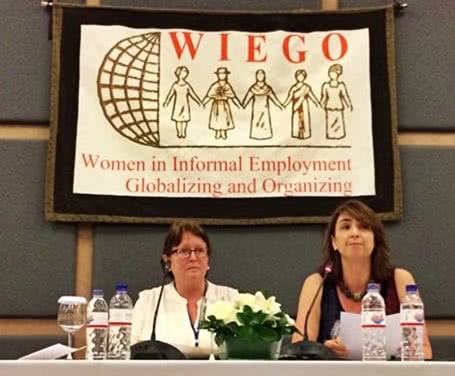 She went on to emphasize that in order to achieve this, special attention must be paid to identifying and addressing the needs and interests of women workers specifically, noting “if we don’t, then we will unintentionally end up reproducing gender inequality that pervades the economy and society.”

After introducing the panellists, Melanie noted that two projects would be highlighted that exemplify WIEGO’s theory of change, which recognizes that real changes can only be made when people organize, identify their needs and interests, and struggle collectively.

Poverty, inequality, the marginalization of the informal economy and gender inequity are all huge, structural problems that at times can seem insurmountable …. Structural conditions are created by people and they can be changed by people. …Central to all of WIEGO’s work is the belief that if the systems that oppress and marginalize informal workers can be transformed, informal workers must organize collectively to increase their voice. ...

Elaine also shared what women’s economic empowerment means to WIEGO:
Empowerment refers to the process of change that gives working poor women – as individual workers and as members of worker organizations – the ability to gain access to the resources they need while also gaining the ability to influence the wider policy, regulatory and institutional environment that shapes their livelihoods and lives. 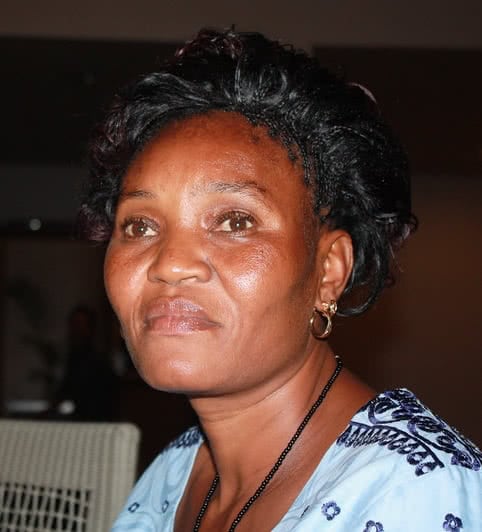 Lucy, a Kenyan mother of four children, is a home-based worker and a member of Bena Kwa Bena, an organization founded in 1992. Bena Kwa Bena, which means “Shoulder to Shoulder”, has 16 women members and is an affiliate of KEFAT, the Kenya Fair Trade network. Lucy said that through the WIEGO project promoting women’s leadership and business skills, she and her colleagues have received training in leadership, women’s constitutional rights, and product development and marketing.

“This has brought about impact and change. We are better leaders,” asserted Lucy, who is now the Treasurer in the local merry-go-round group (savings and credit group). “We have better work supervision and good quality control. Sales have improved by 30 per cent in 2013 due to better communication with our customers. There is more respect with regard to women in society leading to engagement with local leaders on issues like waste disposal and provision of toilets.” 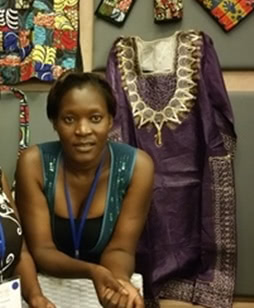 Sarah is a Ugandan home-based worker who makes patchwork products. She belongs to Ngalo Women’s Group, formed in 2009 in Kampala and linked to UGAFAT (the Uganda Fair Trade Network).
“I earn a living by selling my products and am able to pay school fees for my two children and take care of my family,” she said, adding Ngalo means “fingers”. “We called the group that because we use our fingers to make the products.”

In addition to the capacity-building training in leadership, women’s legal rights, and product development and marketing, Sarah noted that her group has received training on the benefits of registration.

“Our sales have improved by 20 per cent over 6 months. This is because we have been able to produce new products that have attracted customers,” she explained. “I know how to make new designs and understand about the need for good quality. I am happy to tell you that my products no longer get rejected! I can now save money with my group bank account and also as an individual. I want to thank everybody for their support!”

Madalena Duarte shared her thoughts about the project: 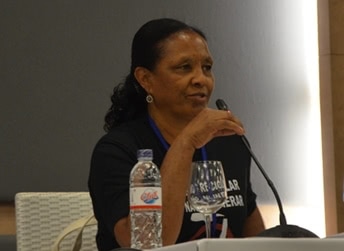 Madalena represents MNCR, the National Movement of Brazilian Waste Pickers, and the Latin American Network of Waste Pickers. She is also a member of a cooperative.
“I want to talk about what this project meant for me. Personally it contributed to my empowerment in the movement and to a greater sense of autonomy,” she said. She also noted that the project enabled women to place gender on the agenda of the national movement and to increase their self-esteem as women and workers.

“It had many positive effects,” she added. “This year, the women demanded of the (MNCR) president that women should be included in the national committee of waste pickers. And this encouraged women in other states of Brazil to take up empowerment. In San Paolo, a women’s chapter of the national chapter was created.”

Madalena voiced her hope that the project will continue and expand so that other women may benefit from it.

Melanie Samson noted five key points that emerged for her from the presentations: 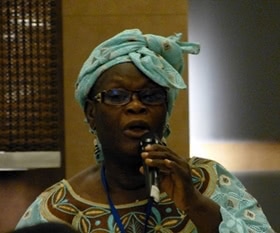 Audience members joined in the discussion.

Repon Chowdhury, LIE, Bangladesh: My question is open to all. What are the key three development challenges in fostering the development of women’s leadership? I am looking for success stories on addressing gender balance at work and dealing with sexual violence.

Second: in some of our programmes, we have to think about family members. If males are on the panel, females are scared and vice versa. So we think we need to bring members of family in to give them feedback through sharing so it can help the development of women in leadership.

Mariko Salamatou, UGSEIN, Niger: Today I am the only woman Secretary General in Niger, so I am interested in understanding why that should be the case and how to push for more women leaders. Leadership always passes down the same way. I am interested in telling you how leadership of men is perpetuated in Africa. One thing is literacy and a first step is for more women to become more literate. The second thing is overcoming poverty. Women are poorer than men and until that is overcome, there won’t be more women leaders. So it’s only when you acquire certain means that it is possible to push for more leadership. Now we have a new national law requiring that at least 30 per cent of everything should be women.

Veronika Yunia Meliana, HNSA, Indonesia: Schools for women are an initiative … to foster female leadership, community organizing and advocacy. We face a serious challenge owing to certain cultural and religious barriers. … These two factors are key factors preventing women from participating more in our community.

Blanca Llerena Gonzalez, FUTRAND, Venezuela: …All the women here are proud and strong…. The main thing here is to get empowered and fight for our rights—don’t ask for them but fight for them.

Edith Kuteesa, NAWOU, Uganda: Sexual violence is a challenge. I work with NAWOU (National Association of Women’s Organizations of Uganda). We found out that even if we trained women to deal with it, we failed because of corruption and other factors. So we engaged the police and brought them into our training. After all, they are also fathers with children. We trained them. We brought out cases where the women or children have been violated and testified in front of them: “I came to the police station and you did not help me.” This kind of action has helped us, and there is a reduction.

Sonia Dias, WIEGO: I want to stress that to overcome all the challenges of gender and to be able to have improvements in terms of gender equality, this doesn’t happen by magic. We need polices, we need programmes that really tackle the problem. We cannot wait for the revolution to tackle gender issues.
Elaine Jones: These are processes. What we are talking about is overcoming deep-seated systemic issues, which can’t be achieved in the time period of three or four projects. We need longer to bring about real change.

Edwin Bett, KEFAT, Kenya: These challenges need a proactive approach where we need to make some serious affirmative action. Low literacy levels for home-based workers is an impediment and we need to deal with this to give women a chance.

Madalena Duarte, MNCR: One of the biggest challenges in this movement towards equality is creating respect between men and women—and it is already a major step being here together and sharing our experiences.