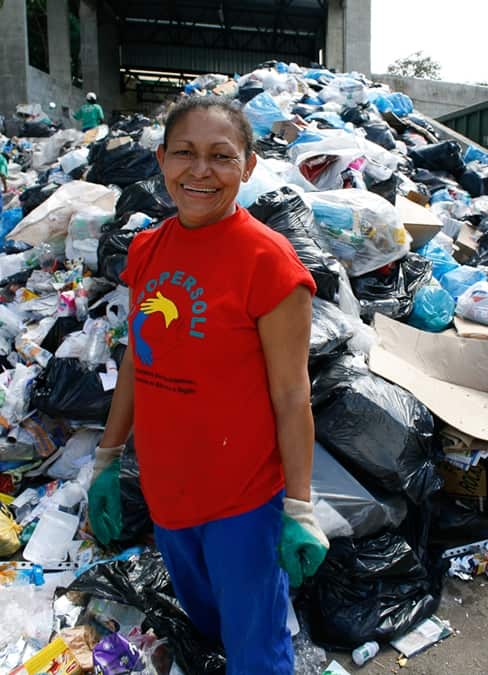 Little research exists about gender relations and divisions among waste pickers. A collaborative project involving waste pickers in Latin America has shed light on the multiple levels of discrimination that women waste pickers face and their needs.

In 2012, the Latin American Waste Pickers’ Network (Red Lacre), the National Movement of Waste Pickers in Brazil (MNCR), and WIEGO opened a dialogue about gender in the context of waste picking or informal recycling. Latin American women had asked for help in bringing gender issues to light within their organizations. An existing relationship with the Center for Study and Research on Women (NEPEM) of the Federal University of Minas Gerais (UFMG) allowed these groups to pilot a project in the state of Minas Gerais, Brazil. Later INSEA, an NGO, joined the project.

This PowerPoint presentation explains why and how the project was undertaken and what findings emerged.

Throughout 2012, meetings were held with women waste pickers from various cooperatives across the state of Minas Gerais. The purpose was to identify the women’s needs, and develop the pilot project and the workshops based on those needs. Participants stated these priorities:

In the lead up to the pilot project, members continued to explore and identify the needs of women waste pickers. Sonia Dias, a Brazil-based waste specialist with WIEGO, raised the gender discussion during waste pickers’ meetings held throughout Brazil. 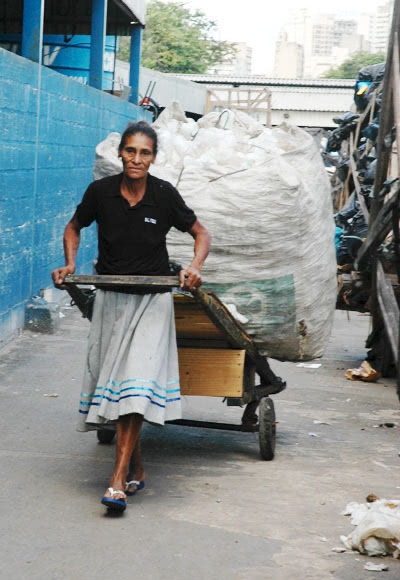 At the Third National Women Waste Pickers’ Congress, held in the state of Paraná, participants identified their needs, such as occupying positions in the MNCR and becoming politically qualified through trainings.

“We don’t want to get stuck in our associations,” one leader said. “When we look at the national leaders [of the MNCR], we only see men.”

Participants also identified practical necessities: literacy classes and the need for training on how to run worker-owned cooperatives. They mentioned the effect of drugs, violence and alcoholism on their self-esteem, which in turns effects their ability to serve as leaders.

In October of 2012, Dias presented the budding gender project to participants of the Waste and Citizenship Festival in Belo Horizonte. She lectured about the importance of discussing gender in the context of informal recycling, which was followed by a lively debate among the 70 participants, both men and women. They showed enthusiasm about the project, emphasizing the importance for men to get involved.

The Gender and Waste Project Comes to Life

VIDEO: In this message for the Urban Thinkers Campus WIEGO´s waste specialist Sonia Dias and the MNCR waste picker leader Madalena Duarte explain the relevance of the gender and waste project for the empowerment of both women and men waste pickers.

In 2013, as a result of this participatory process, the Rethinking Gender in Waste Recycling project launched. It seeks to understand the multiple levels of discrimination that women waste pickers face in the home, in the workplace, and as leaders in their networks and movements. The project also aims to map the needs – such as professional and educational qualifications – of women waste pickers so that they can be economically and politically empowered.

The idea was to implement gender workshops in four regions in the state of Minas Gerais: Belo Horizonte, Estrada Real, Catavales, and Itaúna and to invite two women from each municipality. The first workshop was held in May 2013 in Belo Horizonte; 17 enthusiastic women waste pickers took part.

“In most of the world – even in countries that prohibit gender discrimination in the workplace – women are denied equal participation and opportunities to participate in public life in a just and dignified way,” said Marlise Matos, professor and coordinator of NEPEM. “A significant part of this negation involves many forms of violence as well as frequent rights violations. Black, low-income, and illiterate women – and/or women who work informally – experience these violations even more severely.”

Matos said the project, using a critical feminist perspective, aims to explore “invisible” themes with the waste pickers – themes often ignored even by the women. These include gender relations, violence, prejudice and women’s autonomy. She said a critical analysis of these issues is essential for strengthening women’s roles as active citizens, and for building a gender-sensitive system that will strengthen democratic processes from the ground up.

Applying a gender perspective to waste pickers’ activities means understanding the many levels of submission and discrimination women face. It’s about problematizing the normalized social relations and questioning the ways in which gender divisions manifest themselves as social divisions at work. It means exploring how the marginalization of waste pickers impedes their access to economic independence. Finally, a gender perspective illustrates how stereotypes are used to discourage women’s participation, especially in formal situations. 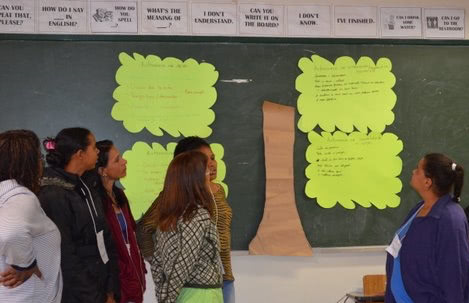 During the workshops, women were asked to describe what autonomy for women is—at home, at work, within the cooperative and within the waste movement. Their answers were used to form an “autonomy tree”—a visual reference that allowed them to see how interlinked women’s private and public experiences of power and powerlessness are.

In some workshops, the theme of violence was overwhelmingly present. But in every phase of the project, they displayed a strong desire to be recognized, and to learn more. Some specified their goals, such as that of reading and writing, computer literacy, public speaking, and training in policy. While many of the women are leaders in their associations – and feel safe and empowered in their workplaces – there is a growing need for recognition within the National Movement. These women would like to grow as leaders.

Dias emphasizes that the empowerment of women does not mean the exclusion of men – it means the emancipation of all people. Discussion on how gender relations impact women’s and men’s lives – at home and in the workplace – are imperative for awareness and change.

The project will create resources for the empowerment of women waste pickers across Latin America. So far, it has led to a methodological guide for gender and waste workshops (in Portuguese), an annotated bibliography of existing literature on waste and gender (in English), individual reports based on each of the four workshops, and a list of teaching resources (videos, manuals, etc.) with summaries of each resource, key points and links.

This year, project members will draft a popular publication with key lessons learned and will discuss the importance of mainstreaming gender. They will also host a one-day event at which the women participants will share their experiences at last year’s workshops and provide a space for collective reflection.

Ana Carolina Ogando, a researcher with NEPEM, said the project reinforces the importance of economic autonomy in tackling the various dimensions of gender oppression. Through the project, two particularly valuable lessons stood out for her. “Raising consciousness on gender issues is a tool for fostering solidarity among the women. Second, recognizing these women’s voices and experiences was not only essential for the participants to value their own strength and agency, but also to enhance our understanding of their situation and what strategies would better work in their life context.”

In the various discussions between women waste pickers through the phases of this project, they pointed out the practical as well as strategic necessities. While the women carry many stories of discrimination and violence, they emphasize they are no longer the “poor victims” that they were in the past. Today, women’s voices are growing stronger, and they tell their stories of overcoming adversity proudly.

“It was enriching to work with other women to build our understanding of autonomy and empowerment,” said Clarisse Paradis, a graduate student who received a fellowship to participate in the project. “We left the project strong enough to face the challenges in our lives. I will always treasure the solidarity we felt throughout the project.”

"This project is very important for us women waste pickers because it has trained us to exercise our autonomy," said Madalena Duarte, a waste picker leader with the National Brazilian Movement (MNCR) based in Minas Gerais. "As women waste pickers, we play a very important role in society. Together we can go much further. With organization, dialogue, and understanding, we can multiply our impact, exercise what we've learned in our associations, and train new women leaders."

What’s Next for the Rethinking Gender in Waste Recycling Project

At a national meeting, a woman waste picker said, “Many women have come to this Congress three times and nothing has changed at home.” Her words reflect both the challenge of confronting gender relations in the home, and the understanding that big events are not enough to change gender dynamics and oppression.

This highlights the need for a long-term, participatory process of education and training on gender relations. The project, one of the first of its kind in Latin America, is approaching this challenge so that women waste pickers continue to move forward.