An action research project examined the experiences of women producers in collective enterprises in seven countries between 2009–2011. The study highlighted the economic and social benefits of engaging in groups with links to Fair Trade.

Findings and case studies are detailed in the publication Trading Our Way Up: Women Organizing for Fair Trade.

The group has enabled me to face the challenges as I feel more self-confident ... when you are in the team you learn from others and are inspired to do better. I appeal to women to come out of the shell and become bold ... Joining the group will consolidate their efforts to fight poverty.

The women who produce goods for Fair Trade markets face multiple threats. The global economic recession had a massive impact on poor producers. Downturns in global markets reduced the demand from Fair Trade buyers, some of whom went out of business. At the same time, climate change has brought devastating natural disasters like droughts and floods, which impact the poor more severely.

The Women Organizing for Fair Trade action-research project involved women producers and their organizations in India, Nepal, Nicaragua, Mexico, Kenya, Uganda and Tanzania. Led by WIEGO's Global Trade Programme, the project demonstrated that when women organize in groups for market access, they are more effective in achieving positive change in their economic and social situation. It also revealed a need to help women develop the skills to assume leadership positions. Women producers were involved in all stages of the project.

Case studies examined different organizational forms of producer groups and fair trade associations. They highlight key success factors in the strategies adopted to engage with fair trade markets, and consider what support producer organizations receive from their affiliation with associations and country networks. Case studies were collected through a process in which informal workers told their stories through photo journals, murals, film, songs, embroidery and words. This is particularly important due to low literacy levels.

Many of the local facilitators were given digital cameras to capture the reality of the women at work and as they participated in their organizations and in project activities.

In some countries, groups commissioned professional documentaries. Others developed songs, murals and basketry to tell the women’s stories.

Watch videos from the project

The case studies show that informal workers have organized themselves for production and trade, learned new skills, understood quality requirements, developed new products, and exported to international markets. Through involvement in their associations and cooperatives, women have been successful in accessing markets and having opportunities to solve problems, learn from each other and provide mutual support and protection during difficult times. They grow in confidence, earn incomes to help meet their families’ needs, win the respect of husbands and men in their communities, and begin to participate in community decision-making.

Documentation and dissemination are helping to share good practice examples of fair trade across regions. Lessons learned were documented for future sharing with other women collectives, as well as with donors and partners.

At the project’s initiation workshop, participating groups determined that sharing their case studies more widely and demonstrating the positive impact for women of working collectively may prove to be an added incentive to Fair Trade buyers.

Sharing of information was particularly important in helping women see similarities across countries and share fair trade strategies. Learning and dissemination workshops were held in Mexico and Nicaragua, and in Kenya in May 2011 with representatives from partners in India, Kenya, Nepal, Tanzania and Uganda.

The Mombasa workshop was held on the eve of the biennial global conference of the World Fair Trade Organization (WFTO). At the conference, WIEGO organizers presented on the project and ran two workshops. Documentaries made as part of the project in India were played (these had previously been screened in India and Central America). The films stimulated discussion about the project and questions about the lives of poor women workers and the role of fair trade. Significantly, the involvement of the partners in Women Organizing for Fair Trade led, for the first time, to the WFTO's inclusion of gender on its agenda.

This created the impetus to develop a gender strategy for WFTO. Elaine Jones, Director of WIEGO's Global Trade Programme, was asked to chair a working group to craft this strategy and redraft Fair Trade Principle 6 (on gender discrimination). She worked with partners from Women Organizing for Fair Trade project, many of whom partnered with WIEGO in the Securing Economic Rights Fair Trade project.

The gender strategy was approved as a new principle at the WFTO biennial conference in May 2013.

Countries of Activity and Partner Organizations 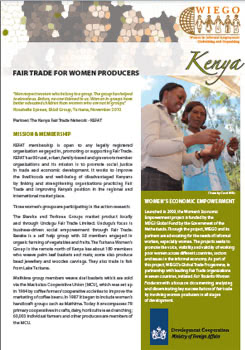 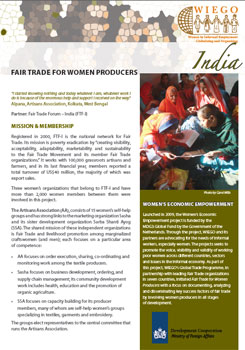 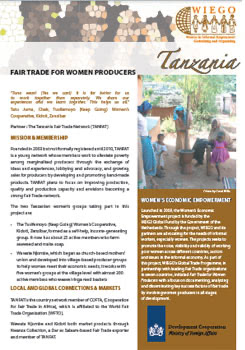 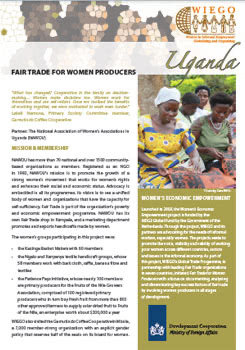 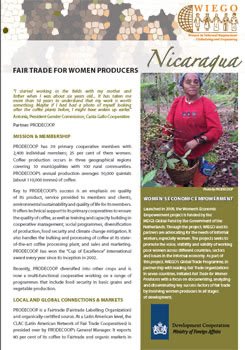 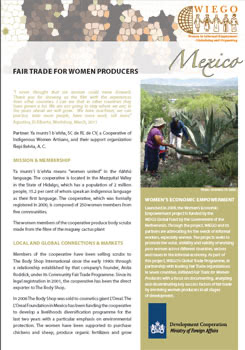 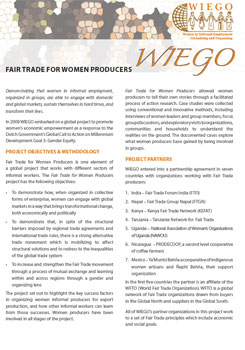 WIEGO worked with lead organizations to identify the appropriate grassroots self-organizing women's groups, and select and train local facilitators. An initiation workshop was held in Kathmandu, Nepal in 2009 with participants from Nepal, India, Kenya, Tanzania, Uganda and Cambodia. Selected women’s groups worked with the local facilitators through the development of case studies and a photographic journal. All groups held workshops to agree on their in-country methodologies and introduce the project to producers at the village level. An estimated 4,000 women were involved in the project through the country partners. Training workshops, based on needs assessments in each country, aimed to improve the skills of the groups and strengthening the organizations.

Across all countries, similar challenges emerged. Many of the women producers are subsistence farmers, but the income from their crafts sales are an essential or even the primary source of income. Yet handicraft production is often not recognized as work and goes undocumented in statistics.
Because of the global economic recession, many producers have suffered a reduction in demand for their goods.

The drop in demand for handicrafts in many Northern countries poses a serious challenge to the sustainability of the sector; dependency on key relationships is often a weakness in the Fair Trade system. Where government support programmes exist, they are often directed at formal enterprises, excluding a large percentage of the working population. However, it appears being organized in groups gives producers a better chance of weathering crisis as they often have credit and savings schemes to fall back on.

Producer organizations need continuous support to innovate in product development, diversify markets, upgrade their skills, learn business skills and access fair finance. The specific work plans of each group include training to informal producers and their leaders so they can share their learning with the wider group and beyond.

The training provided to informal women producers – and the skills and knowledge acquired by field assistants in implementing this project – have become part of the community assets, ensuring dividends will accrue into the future.

Getting gender onto the WFTO agenda in 2011 and subsequently developing a gender strategy for the WFTO, approved in May 2013, could have wide-reaching positive outcomes for women. The Gender Working Group will continue to work with the WFTO regions to support them in the implementation of the Gender Policy.