The worldwide WIEGO network kicked off its Global General Assembly by offering participants a guided tour of four areas in which it has turned collaboration with membership-based organizations into positive changes at the local level.

Exhibitions offered a spotlight on: 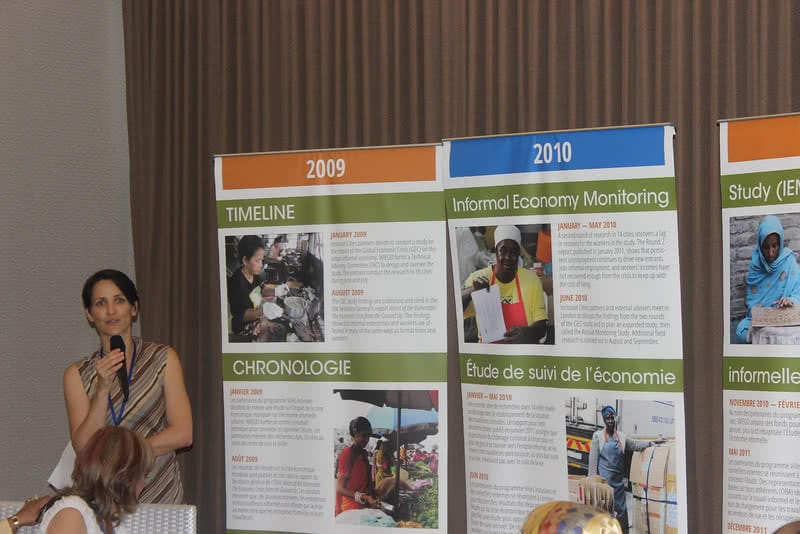 The Informal Economy Monitoring Study —IEMS— is a large research project designed to provide credible, grounded evidence of what is driving changes in the livelihoods of urban informal workers. Surveys, interviews and focus groups were conducted in 10 cities on three continents in 2012. The focus was on home-based workers, street vendors and waste pickers.

"We wanted to be able to say something substantial and reliable about the informal economy, and provide information that informal workers could use on the ground to improve their lives,” explained Imraan Valodia, who led the research in 2012. Membership-based organizations were involved in and guided the IEMS from its conceptualization to the analysis of the data.

The research has had an impact in many of the 10 cities where it was conducted. Materials based on the findings are being used in policy engagement.

As Sally Roever, WIEGO’s Director of Urban Research, noted, policymakers need to stop thinking of informal workers as a problem and understand that they are contributing to the economy. “IEMS gives evidence of this,” she said. “Recognizing them and contributing to their lives helps reduce poverty and improves health conditions in countries.”

WIEGO’s Law & Informality project developed from the premise that informal workers need to know the law to leverage it in their favour, and legal frameworks need to recognize informal workers.

“Law is a tool for building stronger organizations,” Chris Bonner, Director of WIEGO's Organization and Representation Programme, said. “On the other hand, in order to make legal gains, you need a strong organization.”

Four presenters talked about the legal struggles in specific sectors/countries, and what has been achieved.

Domestic Workers: Myrtle Witbooi, the President of the International Domestic Workers’ Federation, said winning the ILO Convention on Decent Work for Domestic Workers (C189) gave a significant legal boost to the global struggle to gain rights for the millions who work in others’ homes. C189 provides guidance for how laws and policies should protect domestic workers. Read about the C189 victory.

However, the struggle continues in most of the world. More countries need to ratify C189, she explained, and more domestic workers need training on how to make this happen. WIEGO is one organization helping with this.

Home-based Workers: Poonsap Tulaphan from HomeNet Thailand also credited an international ILO Convention, C177, on Homeworkers with raising awareness. “Home-based workers were practically invisible,” she said. “Now many have received better pay, and feel that they have an identity and representation.” While Thailand is not one of the 10 countries which have ratified it, a decade-long struggle led by HomeNet and supported by WIEGO secured legal protection for Thailand’s homeworkers. A newlaw now mandates fair wages for homeworkers contracted by an industrial enterprise. It also obliges the hirer to provide a contract, to ensure occupational health and safety, and to establish a committee that provides access to the courts in labour disputes and gives women a place at the decision-making table. Read more.

Street Vendors: Edith Anampa, part of WIEGO’s programme team in Lima, Peru explained how WIEGO established a forum for street vendors to speak to governments and ran the consultation process that resulted in a new city ordinance. The ordinance, passed in May 2014, recognizes street vendors as legitimate workers, simplifies the process by which vendors receive authorization to vend, extends the license period and has a pro-poor orientation. 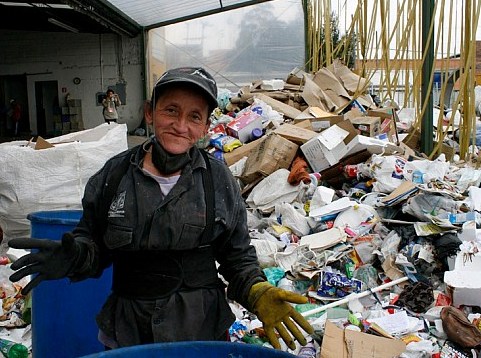 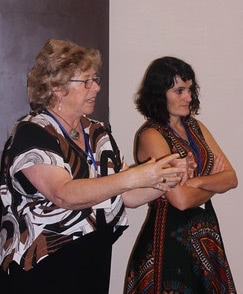 Francie Lund, WIEGO’s Director of Social Protection, opened the session by explaining the context behind the four-year old OHS project.

“In the profession of occupational health and safety, only formal workers and formal workplaces are taken into account,” Francie said. “So really, the majority of the world’s workers these days actually get left out of the possibility to get some help in regulating and improving working environments.”

Listen to Francie explain in a one-minute audio clip.

Laura Alfers, the OHS Project Researcher, detailed the focus and achievements of the project in Brazil, Ghana, India, Peru, South Africa and Tanzania. Visit the Occupational Health and Safety project site for more information and resources.

One important dimension aspect that came out of the project was urban design and design of equipment. Richard Dobson, who leads WIEGO partner Asiye eTafuleni in Durban, South Africa, recounted ways in which urban design has been made favourable for informal workers in that city. 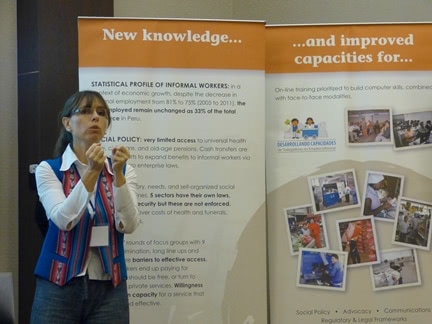 In recent years, WIEGO has taken a focused approach to its work in Accra, Ghana and Lima, Peru—and that approach has led to improvements in informal workers’ lives.

In both Accra and Lima, for example, WIEGO’s projects in law and informality and in occupational health and safety have been implemented. As well, both cities engaged in the Informal Economy Monitoring Study.

Carmen Roca, WIEGO’s Latin American Regional Adviser, lives in Lima and has overseen WIEGO’s diverse work there for years. She notes that the Focal Cities approach arose as “the happy coincidence of having several WIEGO projects, WIEGO personnel, and different, important themes all present in one city.” 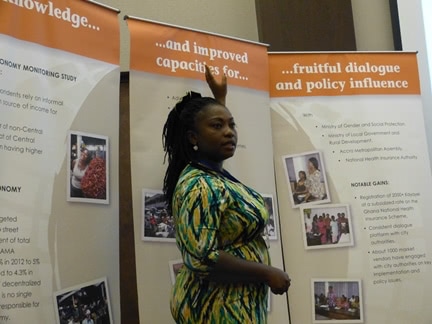 Dorcas Ansah offered a brief snapshot of WIEGO’s five years of work across several sectors of informal workers in Accra.

Efforts were also made to build the advocacy capacity of informal worker organizations, and to help them access to the right people and demand accountability from authorities. Platforms were established through which informal workers, through their MBOs, can engage with city authorities in an on-going process.

Read about a few of these dialogues and what they achieved: 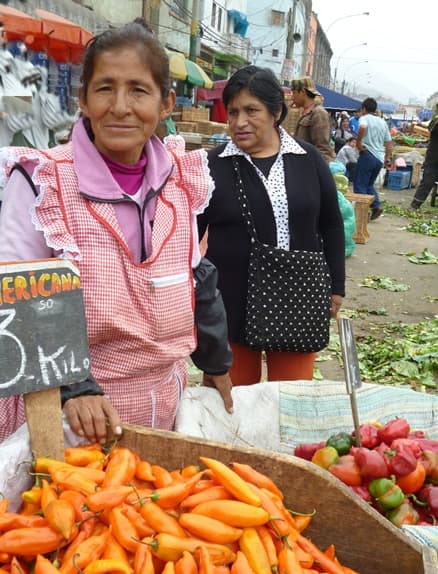 WIEGO’s Focal Cities has worked with seven sectors of informal workers in Lima, the country’s most populous metropolitan area.

In Lima, a main problem was a lack of visibility. Informal worker issues were not widely discussed or understood, and statistical data was not available. The workers needed research, statistics and findings when speaking to the press and governments.

But visibility is increasing. Carmen shared the story of a famous Peruvian chef who helped informal market workers gain recognition by explaining on a radio show how he went to the local markets to buy food. Without the informal workers, he said, he could not produce the food he makes.

The Focal Cities advocacy work was instrumental in securing a new street trade ordinance favourable to informal workers in 2014. The new ordinance, has a pro-poor approach, approves licenses for a period of two years, promotes formalization and growth of the business of the vendor, and seeks to build capacities of vendors while protecting also their health.

Another outcome was that waste pickers can now have their skills certified, proving that they are experts in their work.

An additional effect has come from the OHS project. A pilot study concluded that heavy bags of potatoes—in excess of 100 kg, or twice the allowable legislated weight—were causing physical harm to the informal market porters who must carry the heavy loads. Interest from authorities and wholesalers led to a pilot project that has  farmers packing potatoes in 50 kg sacks.

Patience is an important part of the process, Carmen stressed. “We work step by step, building on the gains from yesterday almost without noticing—but there is progress,” she said. “It’s rewarding when we learn that informal workers are doing things on their own with the local authorities, and we just get to know about them.