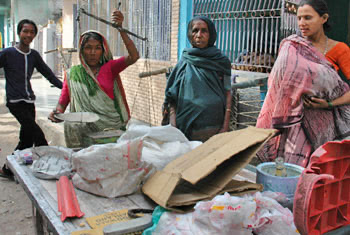 The WIEGO Organization and Representation Programme was set up in 1997 under the leadership of Dan Gallin, former Secretary General of the IUF and current chair of GLI. From 2004-2017 Christine (Chris) Bonner served as Programme Director.

Building and strengthening informal worker organization, and especially international sector networks, has remained a central objective of the programme over the years. Most of our current work is a continuation of past work and achievements.

Home-Based Workers: Prior to the formation of WIEGO in 1997, many of our founding members were involved in providing research, advocating for and supporting home-based workers in the formation of HomeNet International, and in their efforts to secure an international convention. After the adoption in 1996 of the ILO Convention on Homework #177, WIEGO, SEWA and UNIFEM joined forces to:

In 2000 we jointly convened a conference for government officials, representatives of MBOs of informal workers, and researchers from five countries in South Asia. The resulting Kathmandu Declarationcommitted governments to promote national policies in support of home-based workers. HomeNet South Asiaand HomeNet South East Asia now include over 500 organizations working to influence national policies in important areas such as social protection.

In 2007, SEWA and UNIFEM co-hosted a policy conference on home-based workers in South Asia at which Dan Gallin made a speech on the ILO Convention on Homework.

WIEGO also helped support the formation of StreetNet International, which was officially launched in 2002, by assisting with preliminary work such as helping to raise funds and carrying out background research on street vendors and their organizations.

Following this event, the waste pickers/recyclers, with the support of WIEGO, the Inclusive Cities Project and AVINA Foundation, have continued to build and develop their national and global networking activities, including setting up an interim Global Steering Committee, engaging in information exchanges through visits and electronic means, and alliance building particularly with GAIA and partners around climate change advocacy at the UNFCCC negotiations in Bonn and Copenhagen in 2009 and Cancun, Cochabamba, and Tianjin in 2010. (See the waste picker news and blog.)

Domestic Workers: In 2006 the first international conference of domestic workers, called Respect and Rights for Domestic Workers, was held at FNV headquarters (Netherlands Trade Union Federation) in Amsterdam. WIEGO was part of the Conference Steering Committee. The Conference recommended that an international network of domestic workers should be explored, and an ILO Convention on Domestic Work sought. In 2007 the IUF agreed to provide an organizational base for such a network; in 2008 the International Domestic Workers’ Network (IDWN) was formed. WIEGO worked with the IUF to build the Network and its campaign for an ILO Convention (see more about ILO here). WIEGO helped raise funds and provided research and strategy advice. And in 2009, we seconded our European Advisor to the IUF to be the Interim International Coordinator of the IDWN for the duration of the campaign for a Convention. After the June 2011 adoption of C189, a new International Coordinator, Elizabeth Tang, formerly CEO of the Hong Kong Confederation of Trade Unions (HKCFTU), was appointed.

In the year leading up to the ILC discussions, WIEGO:

WIEGO has provided support for building a relationship with the trade union movement and encouraging unions to organize informal workers through our technical support for the International Coordinating Committee on Organizing in the Informal Economy (ICC) and our members/partners who are ITUC affiliates.

Other past and ongoing activities include: