In Jinja, Women Come Together to Learn and to Earn | WIEGO Skip to main content

In Jinja, Women Come Together to Learn and to Earn

Please continue–we are here, and we are willing to learn 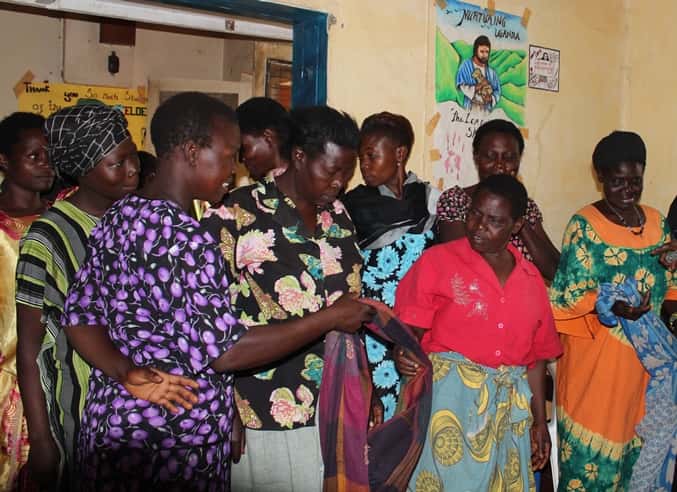 In December 2013, Elaine Jones, Director of the Global Trade Programme for WIEGO, was accompanied by WIEGO Communications team members Brenda Leifso and Leslie Vryenhoek on visits to women’s self-help groups in Uganda and Kenya that are taking part in the Leadership & Business Skills for Women Fair Trade Producers project.

In a rural community on the outskirts of Jinja, Uganda, a group of women are creating—quite literally—a better future for themselves and their families. The 35 women of Kyebajja Tobona Women’s Group, came together, in their own words, “as a result of being oppressed by poverty.” These women, many of whom are mothers or grandmothers and wives or widows—and many of whom are HIV positive—“pondered how we can get out of poverty, and we remembered we are from the villages, where we learned how to make handcrafts.”

The group, which has an elected executive, meets once a week in a small house run by Nurturing Uganda, which is itself a community-based organization formed by local Jinjans to “support people in Jinja and surrounding villages to discover and use their potential, so that they become self-reliant and do not depend on foreign aid anymore.” Nurturing Uganda is a member of the Ugandan Federation for Alternative Trade, a network that is partnering with WIEGO on a project called Leadership & Business Skills for Women Fair Trade Producers.

Prior to the start of the project, the women of Kyebajja Tobona were all making just one product – the same paper bead necklaces. And as a result, the women were all competing for the same, already-saturated market. This did not produce enough supplementary income for their households.

Since the project started, Kyebajja Tobona has received training on new product development, marketing, account management, and savings and credit groups. The training is implemented through a “cascading method”, where UGAFAT trains facilitators from within the group, who then deliver the training to the whole group. In just one year, the women of Kyebajja Tobona have diversified their products to include a variety of baskets, stuffed toys, placemats, and beaded jewelry made from a variety of materials. Each member is now actively searching for and sharing new product ideas. That creative collaboration led the group to design an innovate product not found elsewhere in the market: paper bead button necklaces.

Members have also learned account management. They have learned to cost and manage their raw materials and time and to price their products accordingly. They have also learned how to keep account books, to save, and to establish a savings and credit group. The latter allows them to save through credit banks that will not charge them high interest rates.

Working collectively makes so much more possible —and that’s particularly important because in addition to running their businesses, the women are largely responsible for all the childcare and household work, including growing produce in their small gardens. Many also work other informal jobs like tailoring, owning small retail shops, selling groceries, providing daycare services and working as day labourers. 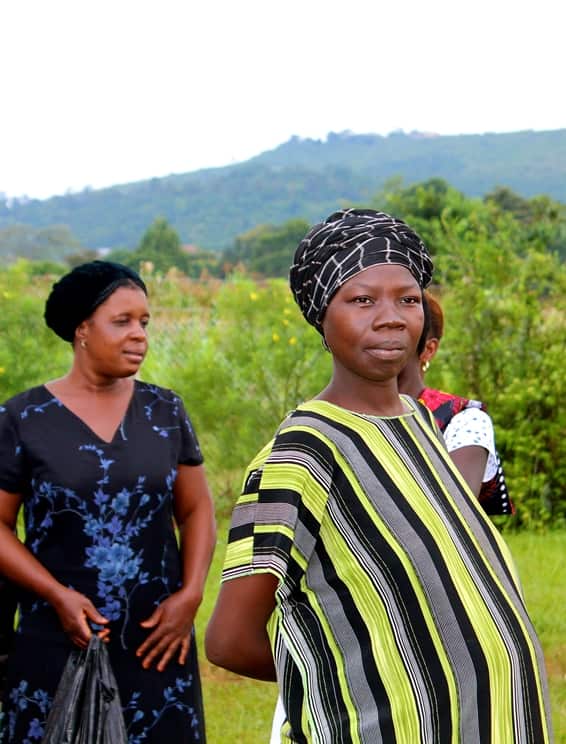 They have also realized how working within a group that operates on fair trade principles can bring advantages. They have recently received a large order of bracelets for an international buyer and plan to do more market research so they know what they will be able to sell in bulk. They take turns marketing products and return to the producers profits earned. They plan to sell their products at major events like World Fair Trade Day in Kampala and are considering a presence in Jinja as well.

At a household level, they initially encountered some resistance from their husbands about coming together to receive the training. However, as the women laughingly explained, “when you sell, you get more understanding from your husbands.” One woman reported she could now sustain herself better, and many others reported they could now pay for their children’s school fees when otherwise the children “would be chased away” from school.

The women say the benefits of working collectively extend beyond the economic. “We have learned,” one explained, “not to discriminate against one another” and “to share every experience” from raising families to preventing HIV transmission. They are looking forward to receiving more training in 2014.

“Please continue,” they told WIEGO representatives who visited in 2013. “We are here, and we are willing to learn.”