These stories illustrate some successes that the WIEGO Network and its partners have achieved in helping informal workers access their rights and improve the conditions of their work and lives. 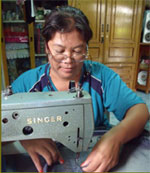 Winning Legal Rights for Home-Based Workers in Thailand
HomeNet Thailand, with support from WIEGO and other partners, campaigned for more than a decade to win legislative protection for homeworkers. In 2010, the Parliament ratified the Homeworkers Protection Act B.E.2553, which provides for protection of wages, occupational health and safety, and responsibility of employers toward homeworkers. The legislation could impact as many as 2 million workers in Thailand. In 2011, the Act and a social protection policy came into force. This Impact brief explains how this was achieved and how Thai homeworkers are benefitting.

Women Come Together to Learn and to Earn
In a rural community on the outskirts of Jinja, Uganda, a group of fair trade producers are creating and selling traditional handicrafts to make a better future for themselves and their families.

Home-Based Workers Raise Their Voices
Home-based workers, the majority of whom are women, constitute an invisible workforce that numbers in the millions globally, yet these workers have very little social protection. HomeNet South Asia and HomeNet SouthEast Asia, both WIEGO’s partners in the Inclusive Cities project, are bringing the realities of home-based workers into the public eye.

Domestic Workers: A Victory for Decent Work
On June 16, 2011, domestic workers around the world celebrated as the International Labour Conference (ILC) adopted a Convention on Decent Work for Domestic Workers (C189). It was a leap forward for the estimated 50–100 million people, most women, who work in the homes of their employers. How domestic workers achieved this significant goal, and how WIEGO played a part, is detailed in this story.

Colombia’s Triumphant Recicladores
Bogota's recicladores (waste pickers) have fought a decades-long battle to be recognized for the valuable work they do. This Impact Story details how they have been victorious – including in court– in protecting their right to access waste and make a living, and in gaining public compensation for their work. A profile of leader Nohra Padilla is included.

Saving the "Mother Market": Mobilizing Street Vendors in Durban
When the Early Morning Market (EMM) in Durban, South Africa was leased and to be replaced by a mall and mini-bus taxi rank, WIEGO partner Asiye eTafuleni (AeT), the World Class Cities for All (WCCA) campaign and other local organizations joined together to save the historic site and help the informal market vendors working there. Approximately 3,000 informal workers would have been affected by the change, but after a two-year long legal struggle, the municipality rescinded the lease.