Nohra Padilla was waste picking on a dump in Colombia by the time she was seven years old. On April 15, 2013, her activism on behalf of recyclers was recognized with the world’s largest prize for grassroots environmentalists – the prestigious Goldman Environmental Prize.

Origins of a Determined Activist 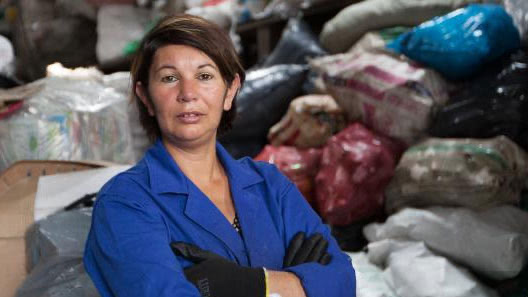 Nohra is a third generation waste picker. As a schoolgirl, she worked alongside her very poor family collecting recyclables at the Bogotá municipal dump in the early morning hours before classes began. After finishing secondary school, with no money for further education and a lack of other employment options, Nohra entered the recycling profession full time. Then in the early 1980s, the municipality threatened to close the dump on which she and hundreds of others made their living, and an activist was born.

The waste pickers formed cooperatives to fight for the right to keep recycling. They lost the battle to keep that dump open, though the municipality offered some financial help to the cooperatives so they could continue their collection work in the streets. On the streets, however, the recyclers faced police harassment and public contempt and were sometimes threatened, or worse.

In 1990, Nohra was part of a group that created the Asociación de Recicladores de Bogotá (ARB) to represent the city’s informal recyclers, who now number about 3,000. Smart and determined, Nohra rose through the ranks. She took the helm as ARB’s Executive Director more than a decade ago. Along with her husband Silvio—also a recycler and activist—she has worked tirelessly to help waste pickers achieve respect as workers and to gain recognition for the services they provide to their communities.

“Becoming organized is a difficult process. In every country in the world, waste pickers have been invisible,” Nohra says. “This situation only changes when we begin to organize.”

Together, Padilla and the recyclers have revolutionized both their work and Bogotá’s waste management system. Today, the informal workers are formally recognized as part of that system. They wear uniforms, carry identification cards acknowledging their profession, and operate two recycling centers.

In 2006, Nohra received a scholarship and could finally attend university. As she neared completion of her degree in Public Management, another threat put her burgeoning skills to the test.

At a global waste pickers’ strategy meeting in April 2012, privatization of waste came to the fore as the biggest threat facing informal recyclers. “Access to waste is the key aspect—if we lose it, we lose our work,” Nohra told waste pickers from around the world who had gathered in India to chart their survival. “We need to articulate ways in which the municipal solid waste management system and the informal recycling sector can be interrelated.”

She knew this battleground firsthand. The year before, in 2011, a public bidding system was announced in Bogotá that would have taken the role of recycling away from the informal workers and handed it instead to private companies for a ten-year period. ARB and its allies took the battle to the Constitutional Court of Colombia in a lawsuit filed by Nohra Padilla. In December 2011, the court cancelled the billion-dollar public bidding process, but gave the ARB just three months to present the municipality with a concrete proposal on how they wanted to be included in the municipal system.

WIEGO, CEMPRE and other allies supported ARB and the Waste Pickers Trade Union Pact to formulate a technical, operational, economic, political and social proposal that would include the entire waste picking community. By the end of 2012, the issue of inclusion had become particularly contentious. ARB’s recyclers found themselves on the outside of the system—but Nohra’s ability to stand firm won the day and they were ultimately included in the city’s waste management programme.

In 2013, ARB was part of another historic moment. The Mayor of Bogotá mandated recycling, and announced a payment system for waste pickers to recognize the important environmental contribution they had long made. Previously, the informal workers’ incomes were solely based on the resale value of the material they collected and transported. Now, the city has offered some compensation to recognize the public service of reclaiming recyclables.

WIEGO’s Waste Picker Coordinator for Latin America, Federico Parra, is based in Bogotá and provides support to ARB. Initially, he says the payment system means that 790 waste pickers and their families will see their normal earnings double or even triple. “Many of them, still in shock, could not do anything other than repeating their thanks,” Federico said following the official launch at a March 2013 ceremony, which featured an automated teller machine where the first withdrawals were made.

Despite the victories that Nohra has helped bring about, big challenges remain. There is the question of how Colombia’s other 14,000+ waste pickers will be included in a payment system so they, too, are remunerated for their environmental services. Meanwhile, Nohra is leading negotiations with the city’s public utilities department on a new waste management contract for recyclers.

As she pointed out at that 2012 global meeting: “People and the conditions of their lives and work—not just the efficiency or effectiveness of the system—must be considered. All this has to do with workers and especially with decent work.”