History of this Movement

Home-based workers approached SEWA. We realized that many ’housewives’ are workers, but are invisible – even for their husbands. 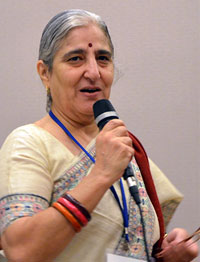 When you talk to the governments they say how many? When you say there are 50 million then they have to listen.

In 2012, WIEGO got the opportunity to reach out once again to home-based workers, including outside of Asia, through the Funding Leadership and Opportunities for Women (FLOW) project. WIEGO started the difficult process of finding out about home-based workers in countries in Latin America and Africa and locating home-based worker organizations and organizations working with home-based workers. WIEGO also supported the nascent HomeNet East Europe to reach out to new countries and build capacity, and planned and implemented activities of sharing and learning in countries, regions and globally. And finally WIEGO had built enough contacts within several countries in each region, leading to a decision to convene this Conference.

Home-based Worker Networks and Organizations Globally There are many differences in the way we work in our countries and regions, but there are so many common issues. Despite tremendous challenges, the regional reports are showing us that it is possible to organize, to become more visible and to have our voices heard. Progress is being made.” Chris Bonner, WIEGO

HomeNet Eastern Europe was registered in 2013 and now has member organizations from 12 countries. Although most are still small progress is being made. They are currently focusing on creating national structures in all countries, promoting the Network, surveying home-based workers, and campaigning for ratification of C177 in all countries.  For presentation see HomeNet Eastern Europe - the network of Home-Based Workers.

The Second Latin American Meeting of Home-based Worker Organizations and Supporters was held from 23 to 25 May 2017 in Santiago de Chile.

“South Asia is the region where we have the largest number of poor people in the world and it is a disaster hot spot. On top of that we have the largest number of home-based workers in the world.”There are more than 50 million home-based workers in the region. HomeNet South Asia operates in seven countries and has 49 member organizations. Highlights include organizing workers into groups, drafting national policies, organizing city dialogues with municipalities to demand civic amenities, instituting the Asian Declaration and setting up a home-based worker company, SABAH.

“The Breath before Dawn”: The SAARC Business Association of Home-based Workers (SABAH). In the South Asia Region a majority of home-based workers are self- employed and struggle to get access to markets for their products. To help overcome this, in 2008 the SABAH Project was launched by HomeNet South Asia and SEWA and supported by the SAARC Development Fund. SABAH has now been established in all seven SAARC countries.

Dr. Sheel Kant Sharma was General Secretary of SAARC and highly supportive of the project. “This is a flagship that focuses on increasing employment, collective marketing and selling of products, learning from each other are some of the aims of the project,” Dr. Sharma said in his inaugural address to the Conference. “It is a model of empowerment of women, to be replicated in other sectors and other countries. SABAH was created for this purpose.”

“The Philippines is the eldest sister. It has been working since 1989. They have organised nearly 20,000 informal workers, mostly women.” Suntaree. HomeNet South East Asia has members in five countries. It has made many gains for home-based workers in different countries such as the Homeworkers Protection Act in Thailand; access to social protection in Philippines; organizing 4000 home-based workers in Indonesia; and an occupational health and safety programme in Cambodia. However, notes Suntaree, there are still challenges: “We can say we are recognized as workers but we are still second class workers. We lack of equal access to labour protection, laws and policies and social protection. We lack full rights to organise and bargain and the governments do not give us the necessary support, for example for skills training.” For presentation see Home-Based Workers in Southeast Asia.